So as we continue with our bathroom journey, today's post was due to be on the electrics and plumbing but as I was writing I realised that it was going on quite a bit, so I will break it down further still.  Today - Electrics......
So you recall last week we left it looking like this... all clean, empty and ready for its new life! 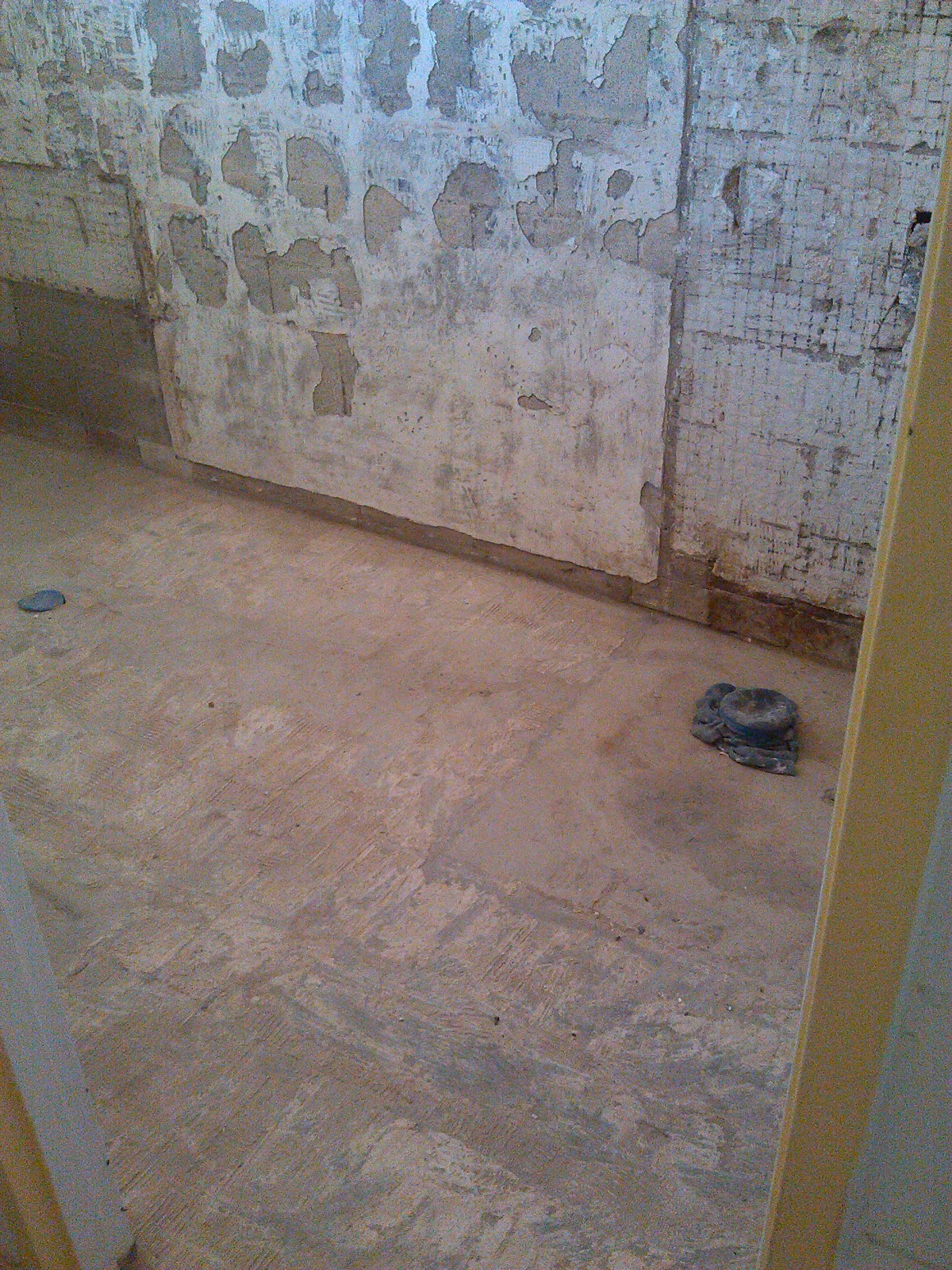 Once all the main demo stuff was done, we were left with a clean(ish) room ready for the plumber and electrician to do their bit before starting the complete re-fit. Before I started any of this reno stuff I would have looked at this room and said 'Wow we are almost there'. The room's cleaned out, the tiles are picked, lets get it all back in there...how hard can it be??  But because I have done this before learnt from (some of) my previous mistakes and assumptions, I knew it was far from being 'almost there'.
So what next...I organized for my electrician, Wade, to come out to a) dismantle and make safe the lights that we were no longer going to use; b) leave safety boxes (?) covering the ones that would be re-instated; c) put in a new GPO by the vanity space, plus while he was here I got him to take out the exhaust fans too.  They are just plugged into a special GPO in the roof cavity so can simply be removed and fitted by us but while he was here it was just easier to get him to do it.  (My excuse - sticking to it !) 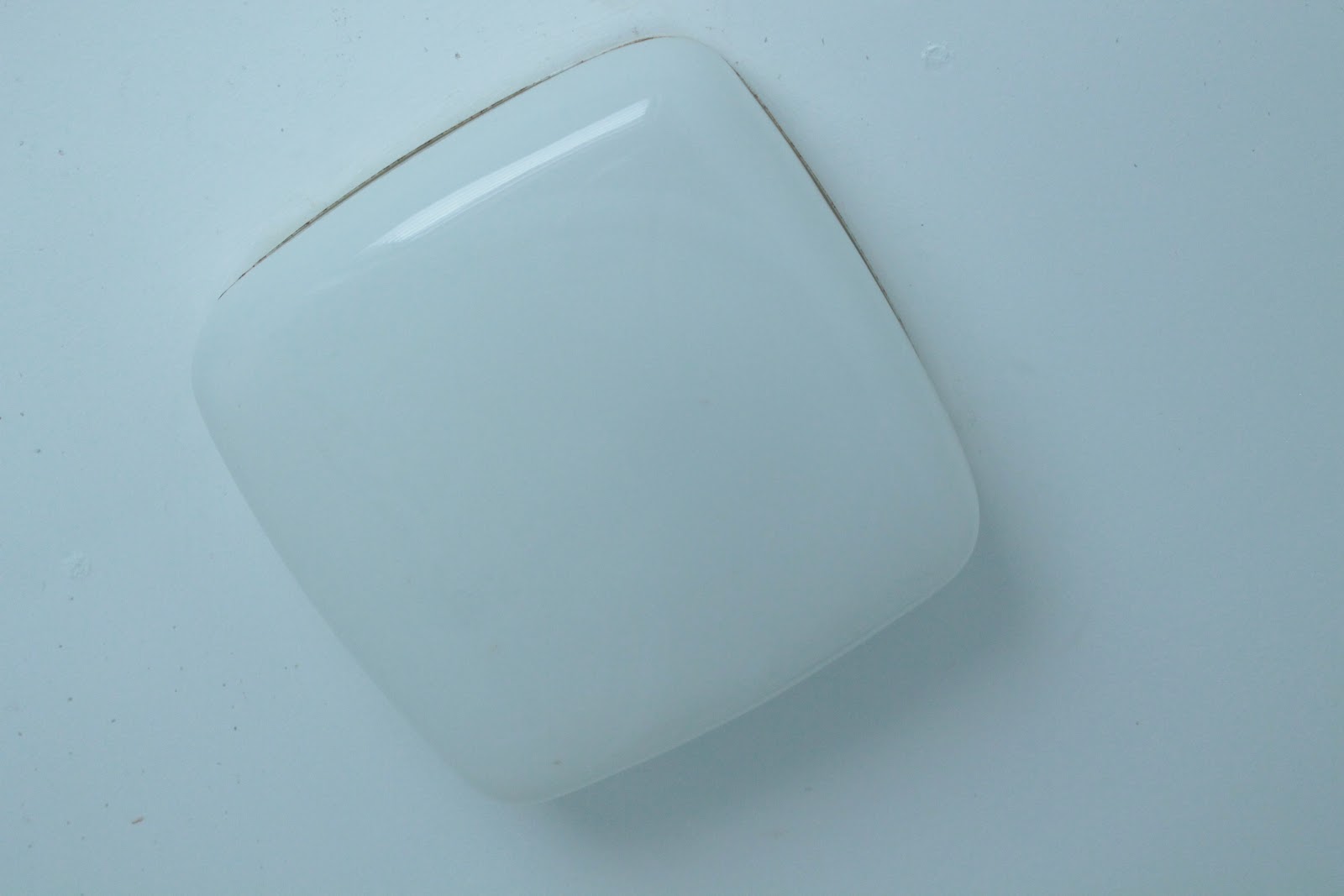 We didn't like the lights in there before, they were off center and ugly.
I had planned to install a Solutube.  A modern skylight that absorbs and 'bend's light through the lined tube bouncing it down to its desired destination. Depending on sunlight (and moonlight), it can also be dimmed or blocked via a switch.  Being as we live in one of the sunniest places in Australia, (Picnic Bay, Magnetic Is. - just over the water from 'our beach' - has the title of being the 'Sunniest place in Queensland' with 320 days of sunshine a year')  it was one of my eco/energy saving projects that I was desperate to include somewhere in this house in an attempt to reduce our carbon footprint and electricity bills, whilst using free energy from the sun. 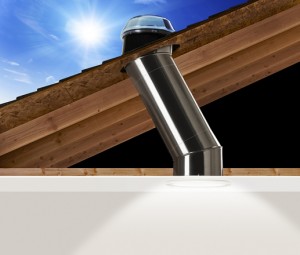 (source)
They obviously cost way more  upfront than any 'normal' lighting system you could put in, but long term you are getting most of your lighting free so it's a great investment.  Even though these types of systems only work when the sun is shining you can get add on light fixtures that, by using LED energy saving globes, provide you with the light you need at night time when the sun is not shining and the moon isn't bright enough to give you the light you require, these can be operated via  a normal light switch.
So why do I say I planned to do this, not I did this...?  You remember how Col goes on and on about living somewhere before you renovate yada yada yada.  Well this is one of those situations where waiting was best, albeit done completely by accident.  *When choosing energy efficiency solutions in any situation, you have to add up the whole package and work out what is actually better for you.  For example spending a huge amount on solar panels covering your entire roof is a great solution if you are home all day and using all/most of your energy supplies during daytime hours, (or if you were lucky enough to get the 44c QLD feed in tariff).  If however you and your family are out of your house from 8am-5pm most days and occasional weekends with little to no feed in tariff to the grid then it would possibly feel like a bit of a waste of money.  You wouldn't break even for a loooong time (you would eventually, so it's not all negative), but it is likely you will still be paying small to medium sized bills and it may make you wonder whether it was worth it.  Until solar battery storage becomes cheaper and more readily available we, as a country, are not making the most of that beautiful Ergon-busting ball of fire in the sky.  I am no expert in solar, far from it, but I have researched enough to understand the basic ins and outs of it and know what is right or not for us.  Does that mean we are not getting solar...no, it means we are still in the decision making process.  I am home most of the day and so would do all our clothes washing etc during the day, I would also make sure our pool pump is running while the sun was paying for it, but what else would I be gaining, I don't watch the TV or run huge amounts of appliances during the day, so at this stage we are still in the 'not sure' category.  I am getting closer with my decision but it is a slow process!  Also technology is changing all the time, and fast too, so I am hanging out for those battery back ups!!! ;o)
*Note - this subject would need a whole post all of its own (and a whole lot more research from me) to discuss it accurately as  government/energy company feed in tariffs are different in every state and change so often.  It isn't as cut and dried as this one paragraph, I am just saying what would and wouldn't work for us.  With energy prices in Australia being amongst the highest in the world, in the last 2 years our prices have doubled, any saving is better than nothing but you have to do the math and get the system that will suit you best.  On top of that you need to start looking at other ways to reduce your energy consumption; maybe we should do another post on that later.
Anyway I completely digressed there, my point was, after living with the bathroom for nearly 4 weeks without any available electric light source, we came to realize rather quickly, that the one long, high window in the room provided enough daylight to light the room perfectly adequately for the majority of daylight hours. 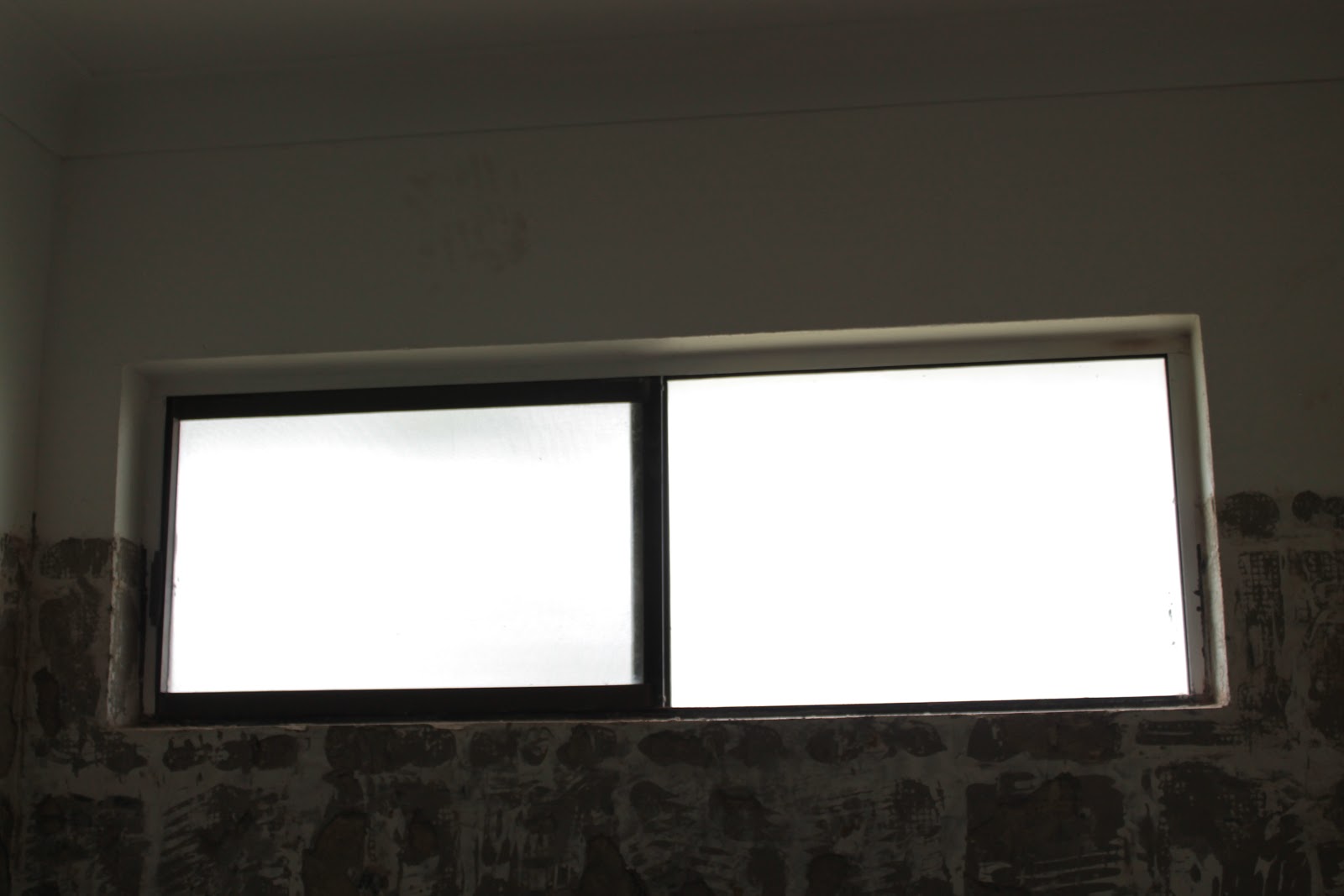 In other words it was a really light room naturally, so spending $1200 on a Solatube would have been unnecessary overkill.  We would need the additional battery back up light fitting/ or an external second light to provide light at night time anyway and although the room would have been beautifully bright during the day it simply wasn't needed.  The only problem with this decision is that it meant we had a dilemma when it came to what we would do with the current 'mess' that was left.  When the original lights were put in they were not exactly done in a very neat fashion... as you can see. 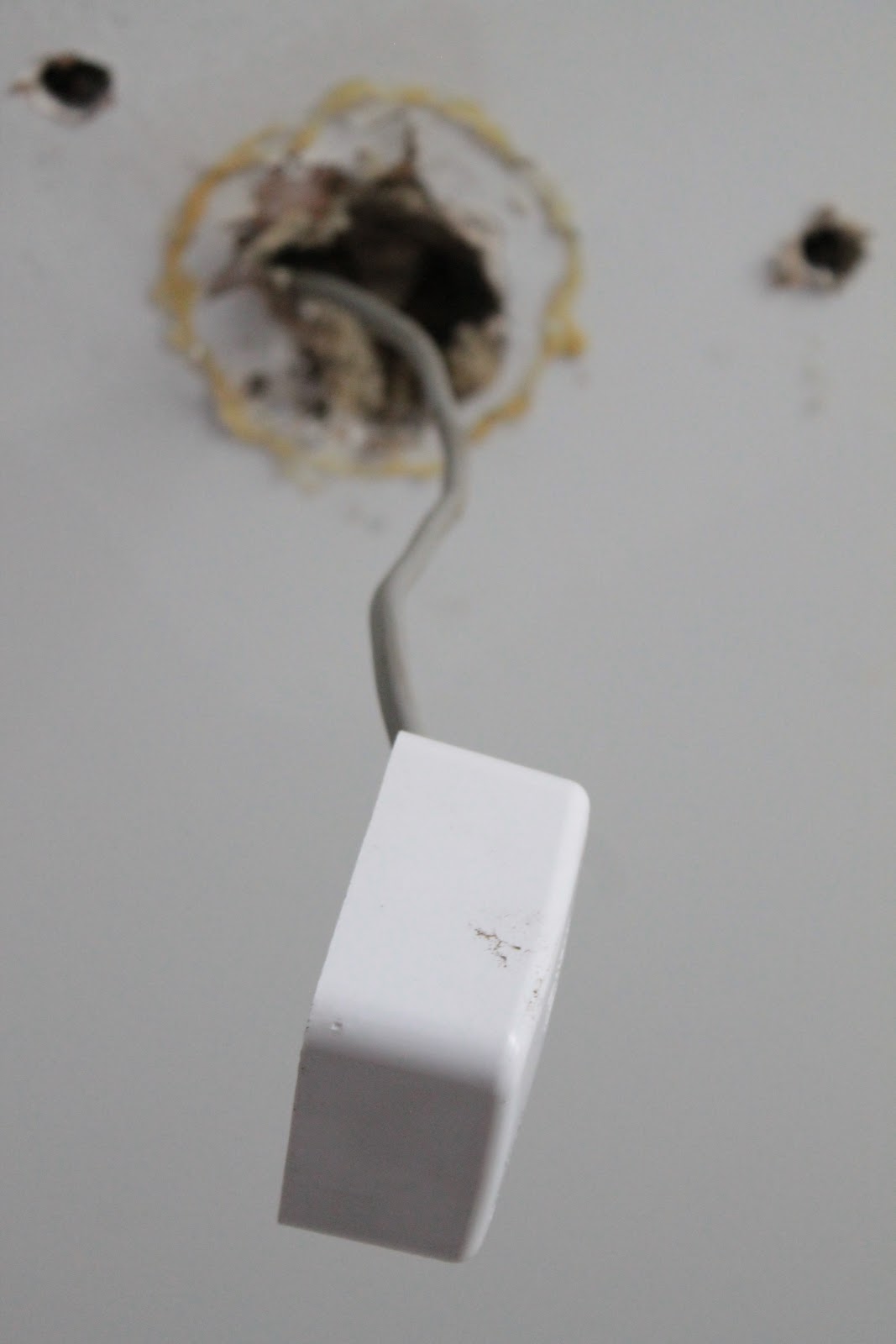 Here Wade has boxed off the connection point while the fit out was completed.  While I make the (loooong ) decision of what we can do to fix it up, without taking the ceiling down and replacing it all - our budget and time constraints didn't allow for that (even though in an ideal world that would be fabulous)! 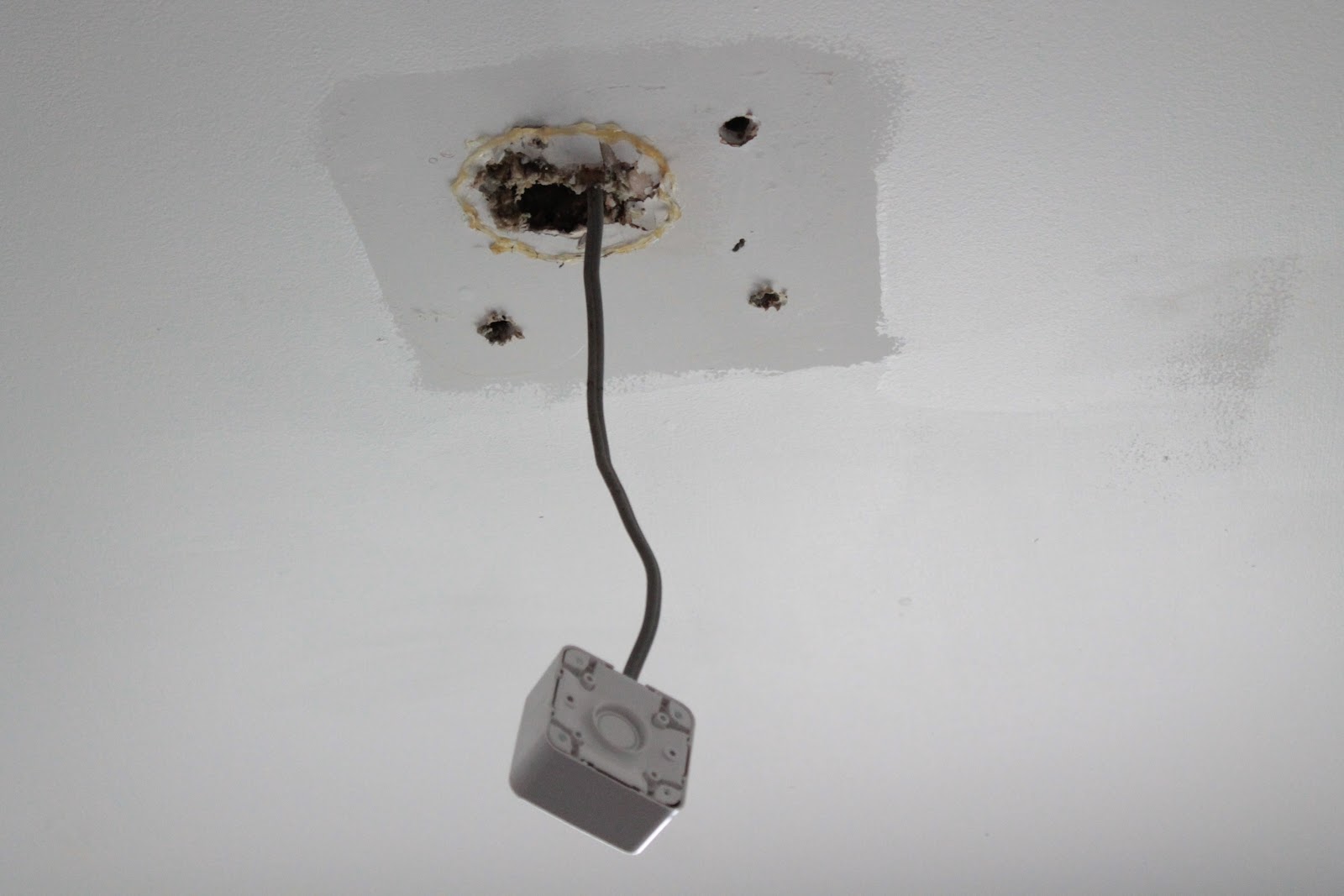 It's like they just punched through the ceiling with their fist and bunged a light over it...seriously?? 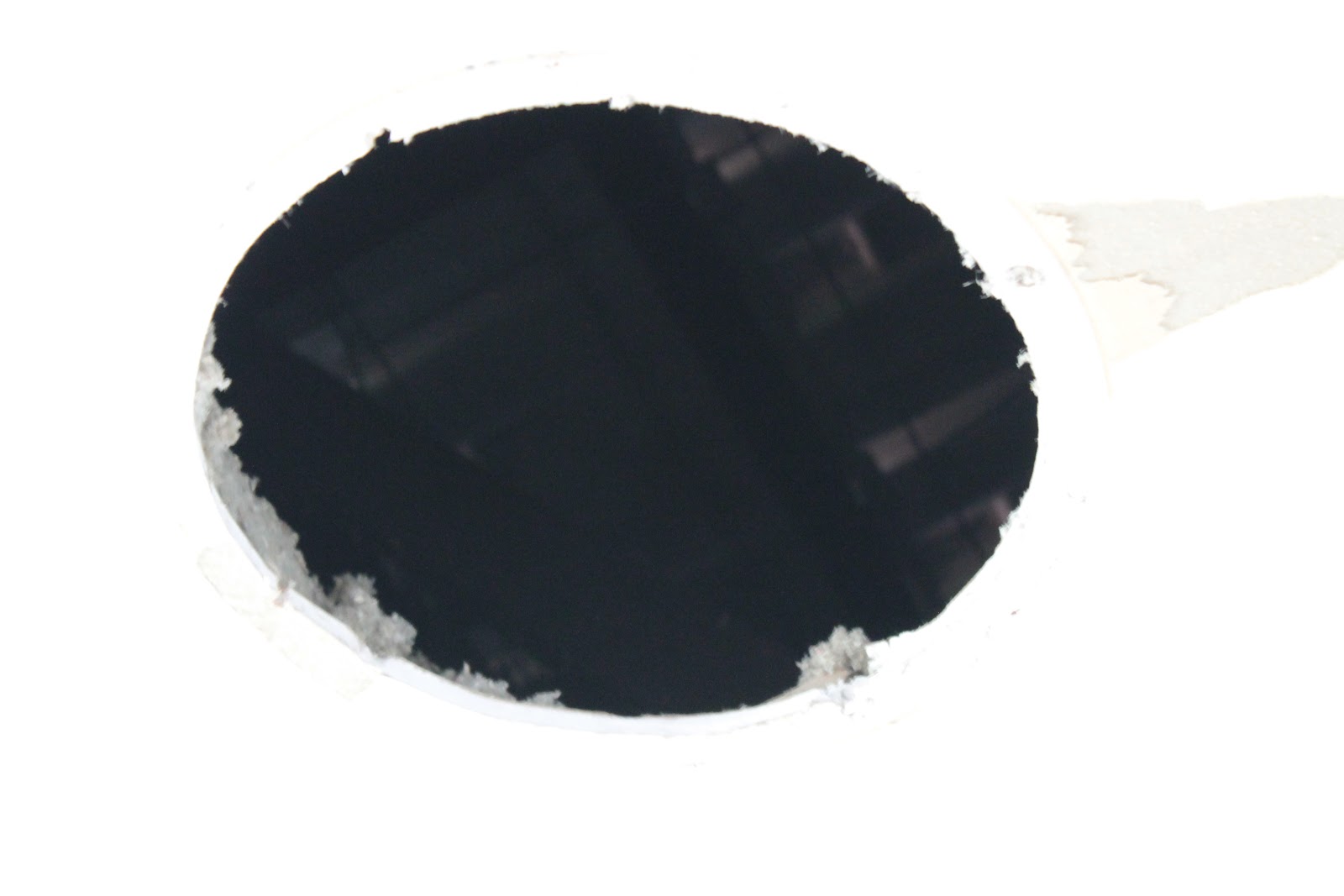 Anyway, moving on, we got on with other jobs like getting the ceiling exhaust fan removed... 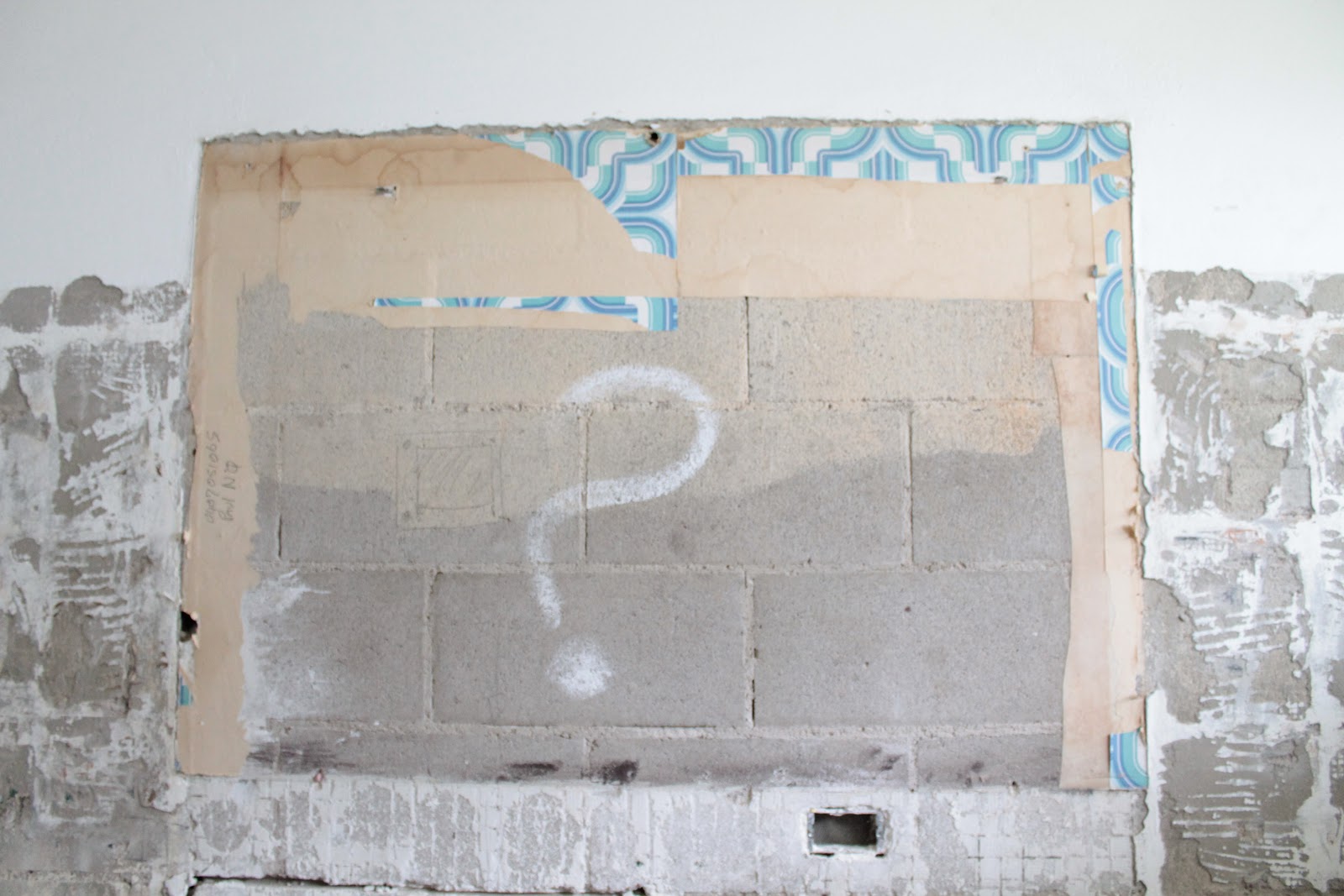 ...and removing and cutting off the power supply to the fluro tube that used to sit above the mirror, that wasn't going back in.  There is a story attached to both the question mark (this was not drawn by me, it was already there) and the wall paper, more on those later!
The last job for Wade was to install a new power point (GPO) by the vanity.  The original one had long been tiled over, (see above photo) possibly for safety.  Building regulations change often (and are different everywhere you go) and that original one was smack bang between the vanity and bath, very close to the bath, so it was definitely a no go for power in this day and age, maybe it was when they last re-did the bathroom so just tiled over it, I don't know.  Here in Queensland you can put a GPO in your bathroom as long as it meets certain safety regulations including certain distances from the water sources etc.  Some people prefer not to have anything in bathrooms just in case, and I totally get that, but it does make it a bit hard if you have electric toothbrushes and suchlike.  We chose to have one, in which we plug one night light in one side so the girls can see ok at night and the other point is blocked with a clear cover.  Our hairdryers etc are all used outside of the bathroom so there is no way our kids could accidentally get into any trouble.  We have also educated them as well as we can to be safe around water and electricity.  We had to pick a place to have the GPO before any of the fit out/tiles were done so we had to make some careful calculations and then add a bit more distance on to 'err on the side of caution' regulation wise.  We brought it back across to the left, as you can see here. 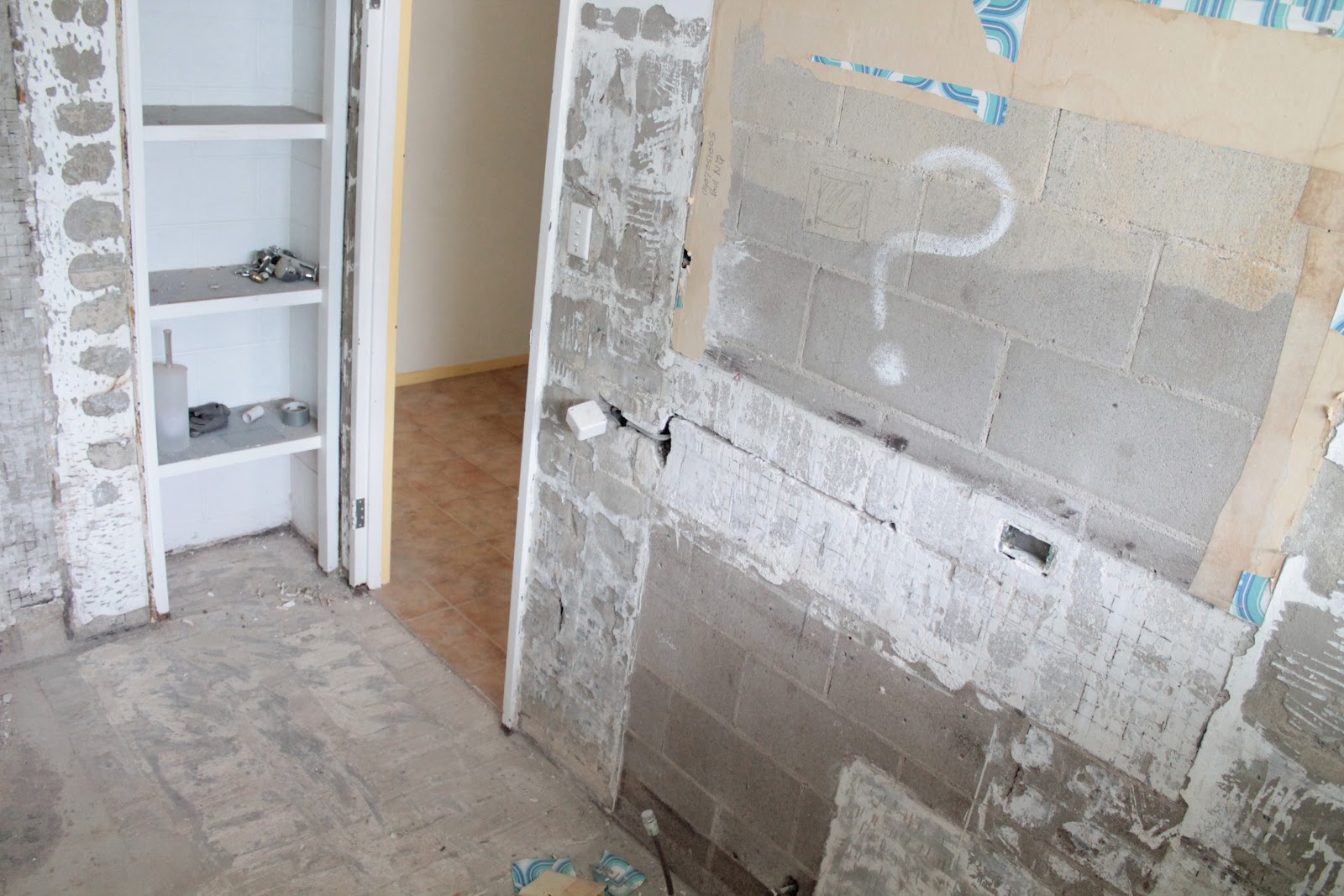 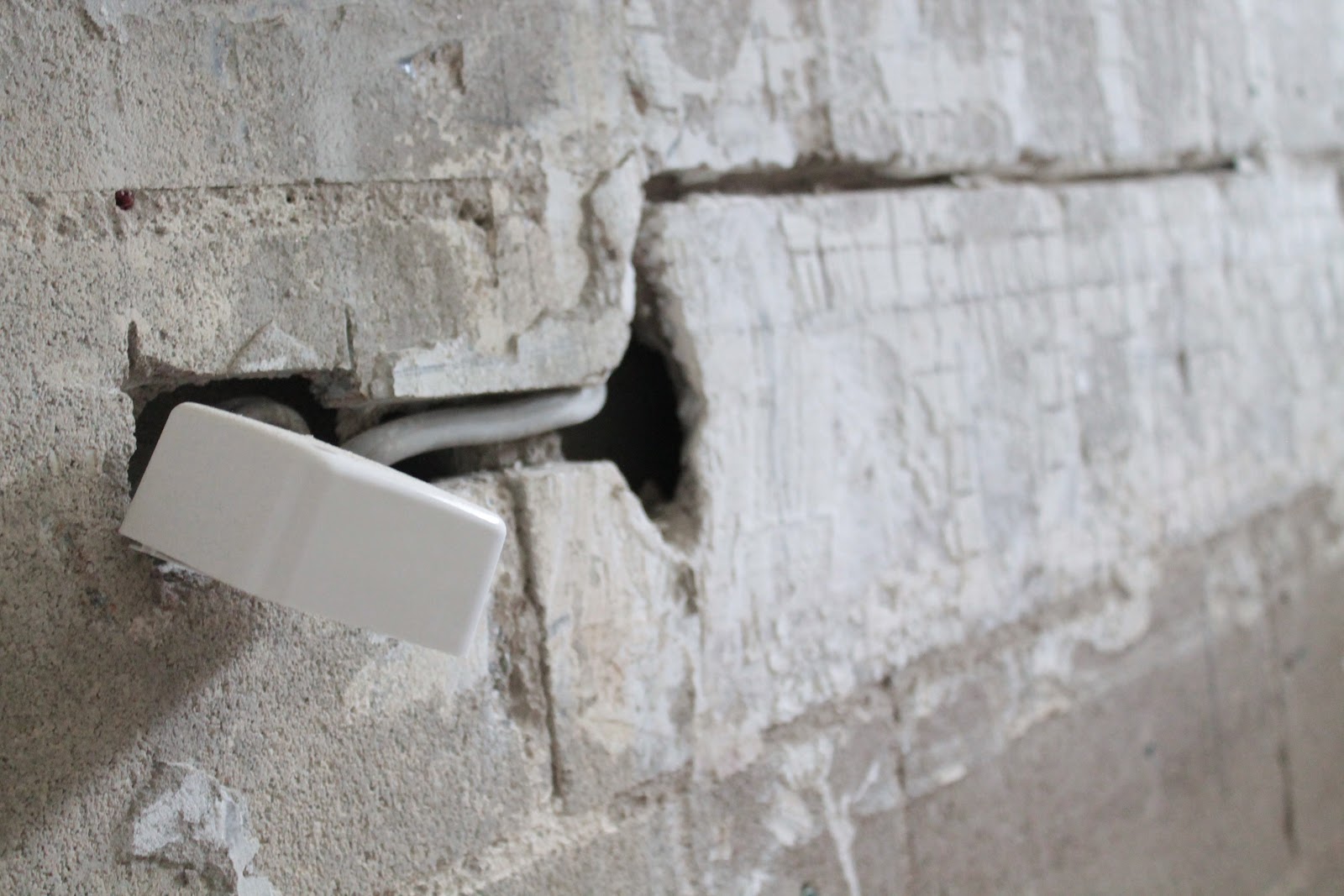 While Wade was here I got him to do a full check of the electrics in the entire house (worth every cent).  After the issues we had at our last place it was a no-brainer to get that done.  Half way through his checking of every switch, GPO and socket, I heard him shout 'F*** you HAVE to be joking - not again...KAAAATTTE"!!  I don't know all the right blurb that followed, it was too long ago to remember now, but it was along the lines of he thought only half the house was connected to the safety switch, (so not quite as bad as the last place where someone had cut off the earth!!)  But bad none the less, then all of a sudden it was all ok, there were two different circuits or something or other (I can't remember) but all was well and a switch needed to be, well... switched! It made no sense to him but it was all fixed very simply!...Phew!  Electric costs were our biggest budget blow out in the last place and we were grateful that wasn't happening again.  Little did we know, the plumber was coming the next day and his story would be totally different...
﻿
﻿