I need the bathroom...

...renovation to be finished!!


Last week Col blogged about the final walk through of our old house and mentioned that we are now 90% finished on the bathroom at this new place.  Well some of you may have done the math and thought to yourself...how on earth have they not finished that project yet??!!  After all it was only a bathroom and they moved in ages ago.  And you'd be right, I completely agree....how on earth have we not finished it yet!?  There are actually a few reasons why it has taken so long, one being that I am completely useless at making decisions, (there Col, I said it) it took me 6 weeks to chose a mirror (more on that another time), but we also had a bad run of luck with items we had ordered being out of stock or having ridiculously delayed delivery times.  So the whole project has dragged on and on.  But for the most part we had the necessities installed and working - i.e the toilet, shower, bath and running water.  So we could live without doors, mirrors, sinks and the like.  Yes you read that right, we actually had no doors on the toilet and bathroom for a while there.  Our house had a very open plan, naturist, weird vibe going on for a few weeks.  There will be more on all that later as well but for today's post we shall start with the before and during photos for the demo...

As we have explained countless times before, we HAD to get this bathroom done before we moved in, we do not have the luxury of two bathrooms in this house (yet) so in order to move in we needed the only functioning bathroom to be in good or perfect working order.  Although the toilet, bath and vanity were all fine (old and dated but fine), the shower was another matter. 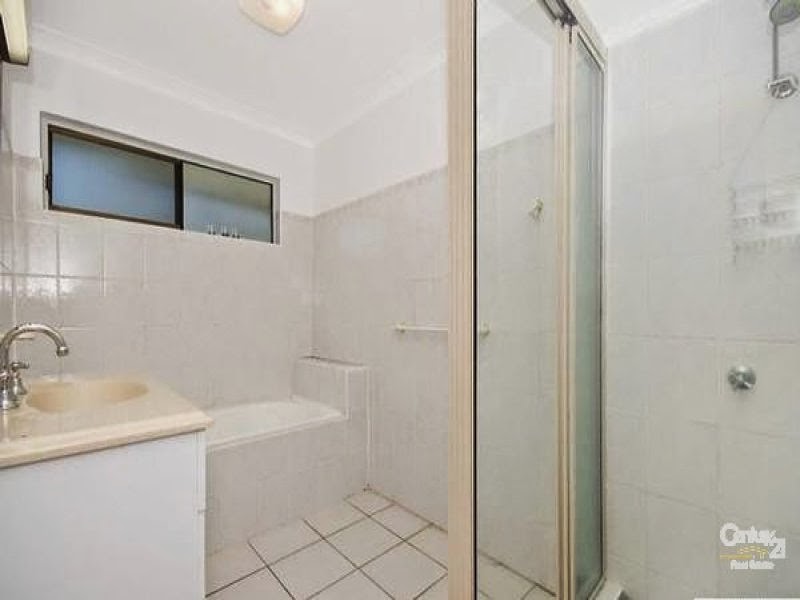 Despite the above picture looking clean and bright, the reality was the shower was a wreck, having been installed 30 odd years ago before wet sealing and waterproofing were standard, it was literally rotten through and leaking terribly.  The shower tray was made of tin (standard back then I'm told) and through years of use and neglect it had completely had it.  The tiles were loose and cracked and it just wasn't keeping the water contained.  We knew this the first time we looked at the house months before we ended up buying it (and we got our plumber out to take a look before we signed contracts to be sure there were no more ugly surprises after the fact) so we adjusted our budgets and costs to accommodate for a complete refit of the bathroom and separate toilet to be completed prior to us moving in.  Of course had we needed to, we could have just 'fixed up' the shower itself and lived with the bathroom how it was, but there was really no point, knowing we'd be changing everything out down the track so it made more sense to get the whole project done and out of the way before moving in.  Here are a few of my before shots, as always there is a mix of quality with these pictures, phone and camera depending on what I brought with me remembered to bring with me that day!!

*Note - I have no idea why some of these pictures are being displayed with a yellowish hue and/or grainy, poor quality. I have spent 2 hours trawling my mate Google's files but can't find a solution, other than changing the HTML code on all pictures, which I have done for some but quite frankly not all because I got bored.  Anyway sorry if they are showing up grainy etc, it may also depend on the browser you are using as to how bad they are...hmmm any ideas let me know (and it's not the auto-enhance solution through Google+/Picassa web) 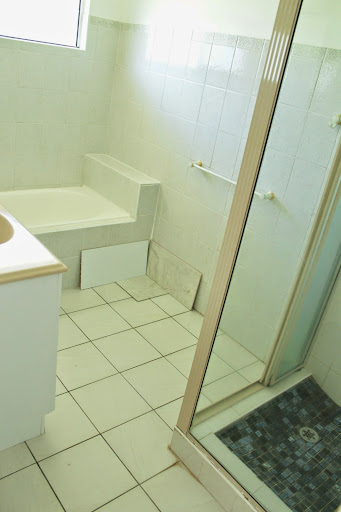 Trying to decide on tile colour choices, completely different to what I had chosen prior to starting 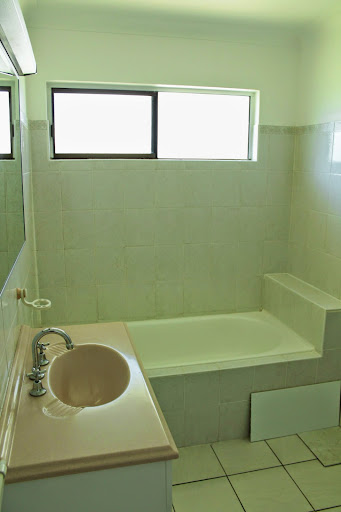 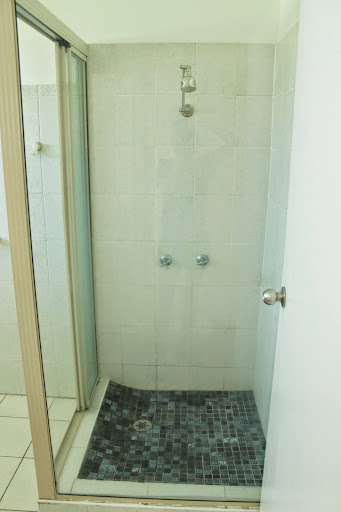 The bizarre mosaic shower tray with its upward curved edge 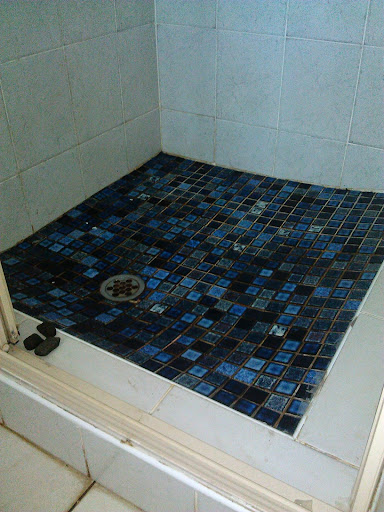 Our tenant said the tiles would lift up and stick to your feet! 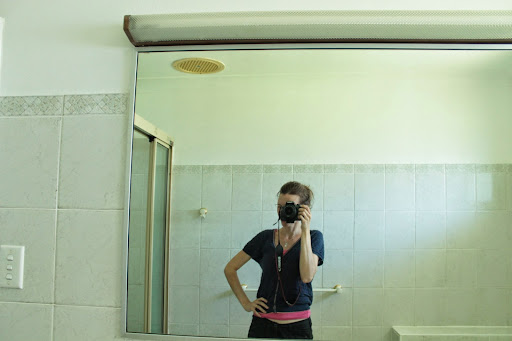 Me being a dill, but also showing where the original tile line ends and the 'over the mirror' fluro tube and horrible brownish air vent. 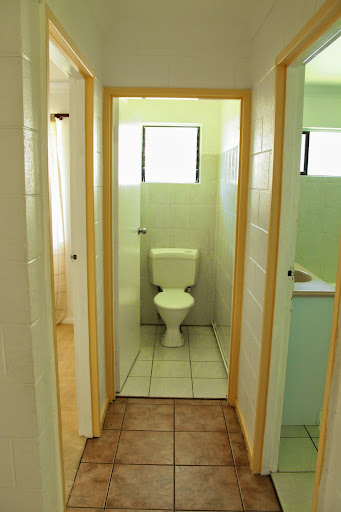 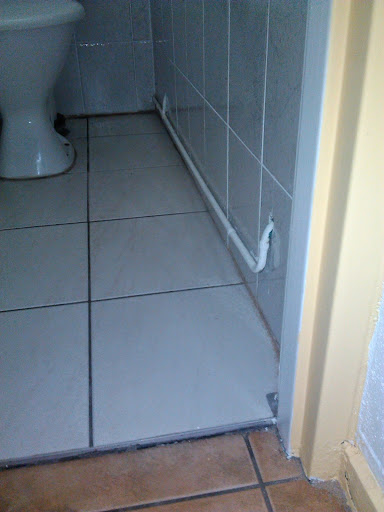 Notice the cold water pipe for the bathroom is attached externally to the toilet wall, such a great look ...non?
If you have ever completed a bathroom reno, or any serious updating, you will know that there is always heaps to think of and plan.  Positioning, lighting, ventilation, tiles colours, vanity sizes, baths, flooring...it is endless.  Even though we had just done this in our last place - twice - this one was totally different. Different building structure, different materials, different time scale, different demo.  With most bathrooms it is much easier and cheaper to stick with the existing foot print, i.e bath where the bath used to be, shower where the shower used to be etc. Of course in timber high set houses it is just as easy to change floor plans by cutting into the floorboards but in this low set, concrete slab, masonry home we couldn't justify the time or cost of changing things around, even though I would have loved to have moved it about a bit, we decided to keep it the same.  And later on it became apparent that we had made the best choice, but again we'll come back to that later.

We did all the demo work last time ourselves, (we being Col) but this time we had to have someone do it for us, there was no way I could do it on top of finishing the last place and all the toing and froing for school runs and extra curricular classes, (not to mention the fact that I am a complete weakling) even though I wanted to try.  This was a BIG job and I think it took our guys nearly 4 days to completely strip it out.  Sometimes tiles come off easily, sometimes...not so much.  These were not all easy, these babies were stuck solid!  The majority had to be power-chiseled off (no simple chisel and hammer job here) and sharp chips of tile were flying everywhere at times.  When I saw my tradie's legs cut to pieces and bleeding I was quietly very glad he was doing it all...sorry Phil! 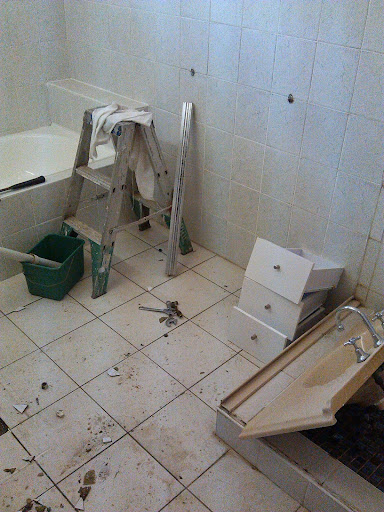 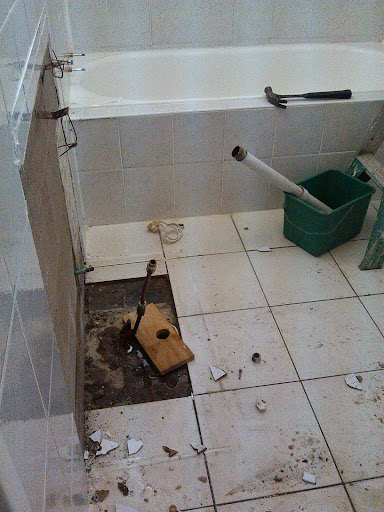 Capping off the pipes, and taking out the vanity 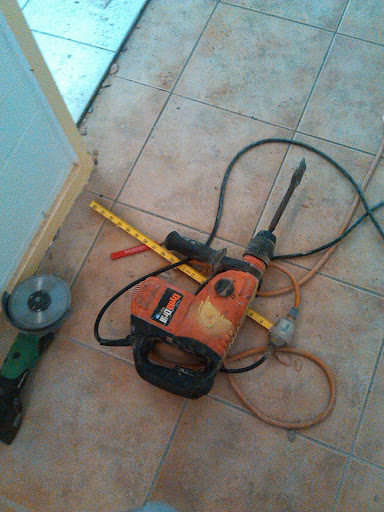 Getting the big guns in 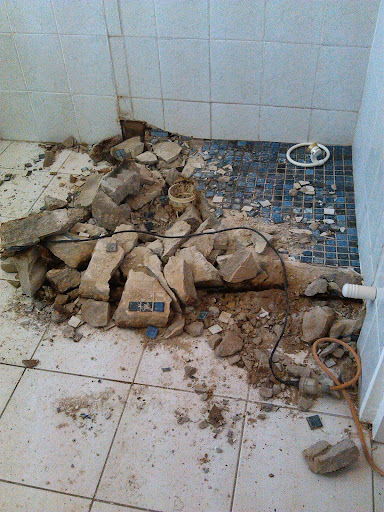 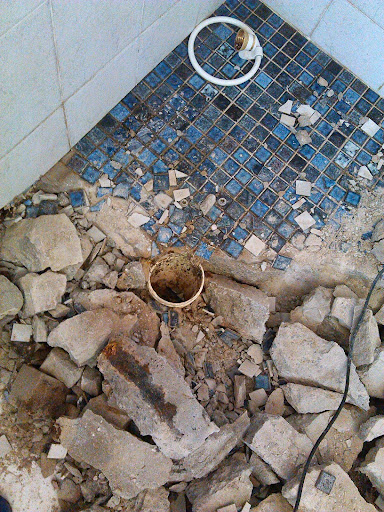 Pulling up the concrete blockwork that formed the shower base 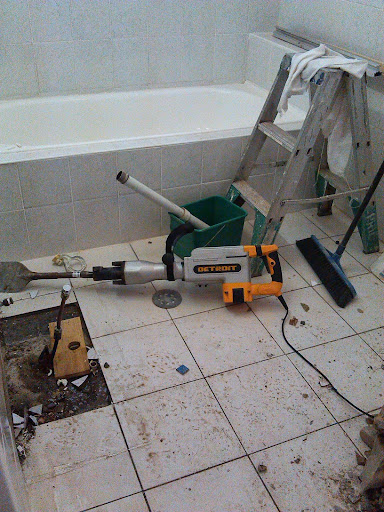 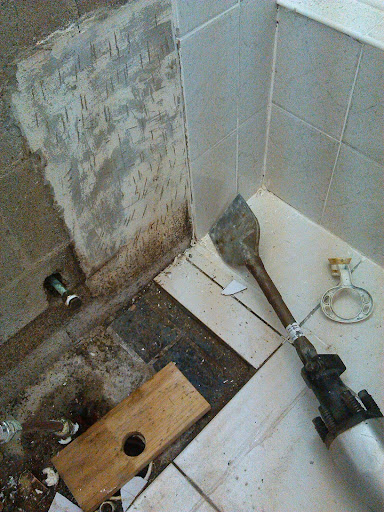 Underneath the floor tiles were shiny black tiles, who would have thunk it!? 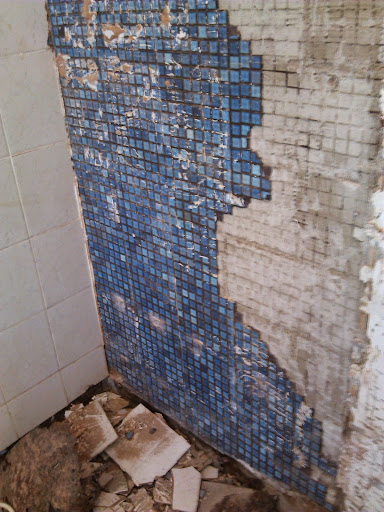 And underneath the white shower wall tiles were more of the original floor mosaic tiles...gahhhh! 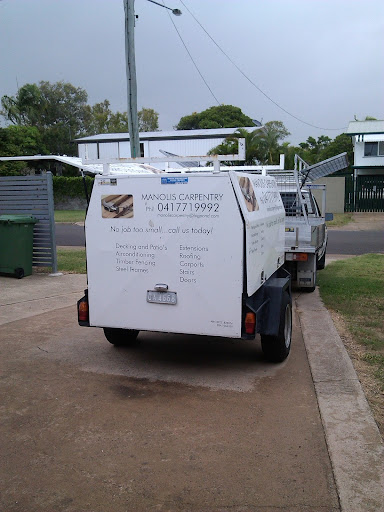 We weren't expecting that!  No matter how much planning you do, you can never be ready for unexpected things like double layers of tiles, luckily Phil brought in a colleague to help get the job done in the timeframe we were trying to stick to. 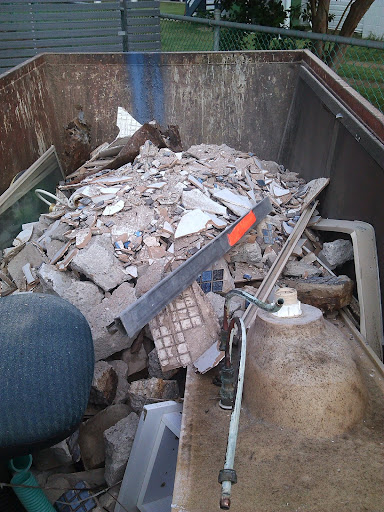 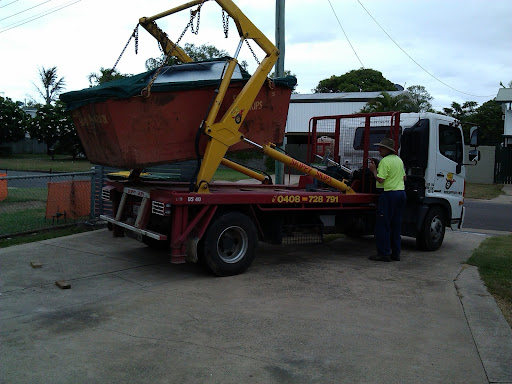 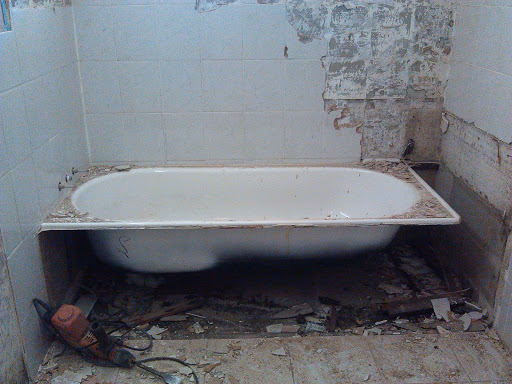 Luckily most walls only had the one layer of tiles! 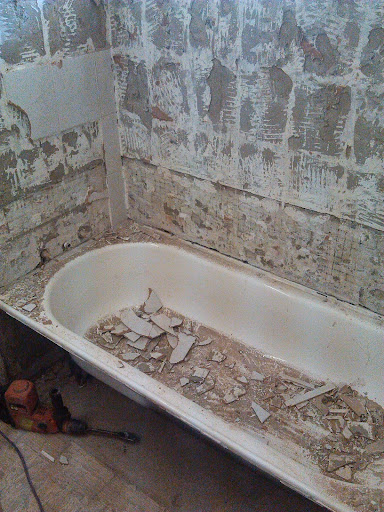 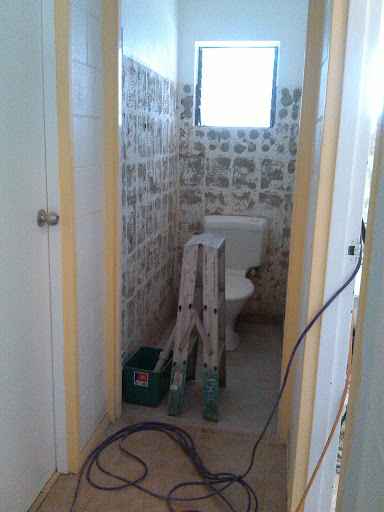 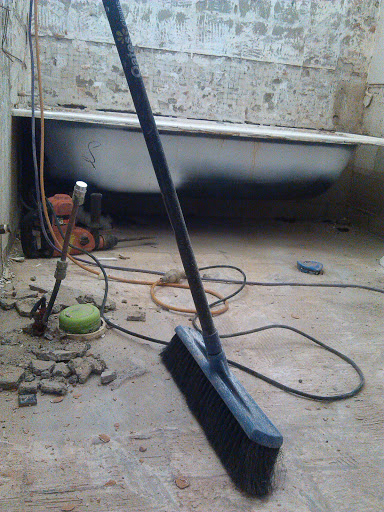 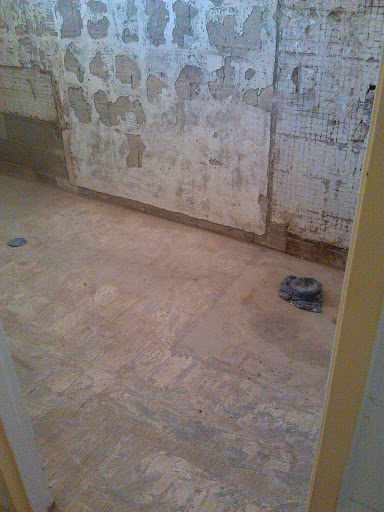 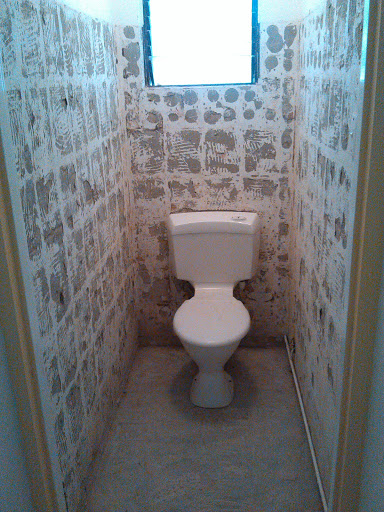 After four days of solid, hard core chipping, hammering, scraping and lugging...all the dirty work was done and we had a clean-ish slate for the plumber, electrician and tiler to do their thang.  Which I will get onto in the next post, I have wasted so much time today with these ridiculous photo issues, I will have to break this project down a little further than I had planned.  So that's all for now, back soon, thanks for reading!
Kxx
Posted by Kate and Col at 22:14