Wha' do ya sink of ma ombré, hombre?

Translated - What are one's feelings towards my 'shaded or graduated in tone' walls, dude?
Yeahhhh well, it worked in my head, maybe not on paper.  Confused?  Read on...
Before we moved back to Australia, we had told the girls that this will be our last move (liar liar pants on fire) and they could have their forever bedrooms and a special feature wall colour all of their own choosing.  As we all know, that didn't happen in the last house as we kept it all neutral knowing we were going to move 'one last time'.  Fast forward to this house.  We stood by our promises and allowed the girls to chose a special colour for their new, REAL, forever bedroom walls.  The only rule was that out of the 4 walls, 3 would be white and they could pick the fourth wall colour, as long as it was a nice lively colour - not black or brown.
Now I have to digress a little here to explain myself....you may be thinking to yourselves, 'surely they didn't need to be told that, as if two little girls would pick brown walls'.  And mostly you'd be right but just to show how much we, as parents, influence our youngest here's an entry into Poppy's Yearly Question Book**(see ps.) from 2013... 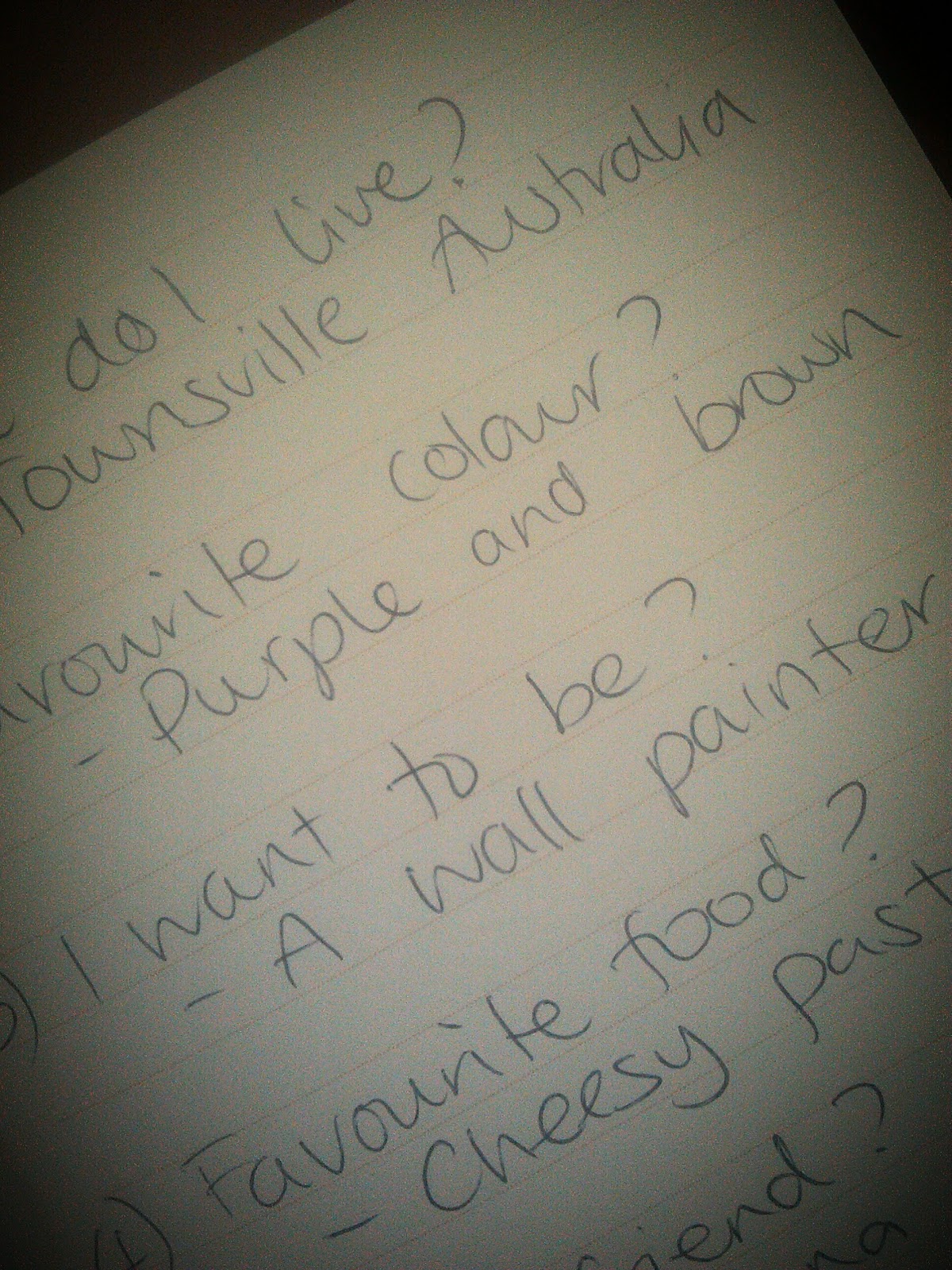 So her favourite colour had evolved from just 'purple' last year to 'purple and brown' and her career of choice was now 'a wall painter'.  We left the answer as that in her book, but she wasn't done.  She went on to say, "...but I wont be painting my peoples houses all this boring white. No, nope, no, I will paint everything brown".  Then she started gesturing at walls, "this one BROWN,....that one BROWN".  And so on, so do you see now why the caveat was put in place?  Ok, goodie...lets continue.

So during the start of the bathroom demo (i.e before we lost the toilet), I was spending all week painting the lounge and kitchen walls and at weekends we would occasionally camp out at the house. 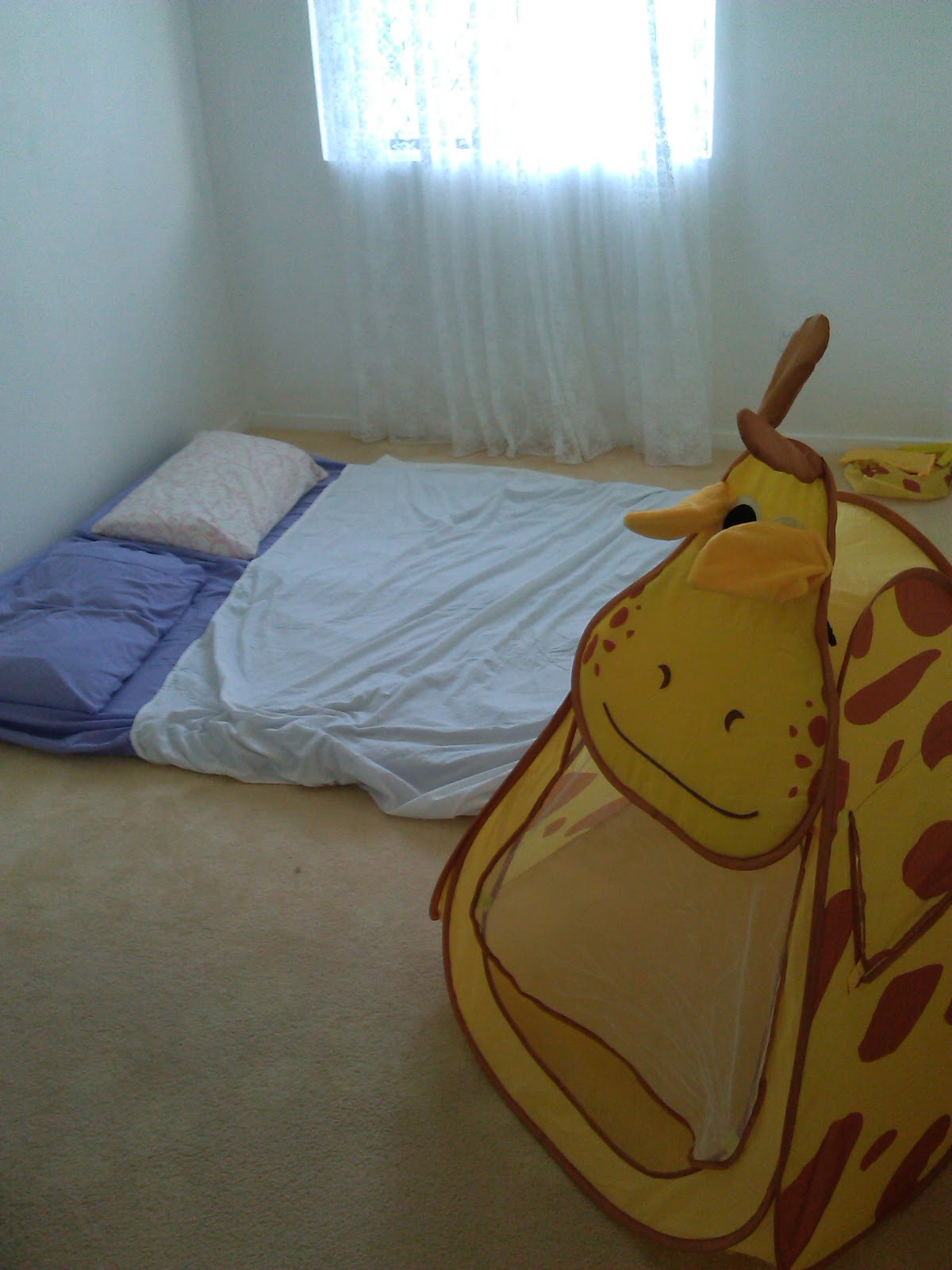 Col would paint the ceilings and do general maintenance stuff, and I would continue with the bedroom walls.  The girls would spend hours creating a model house out of a huge piece of cardboard that we had acquired from somewhere or another.  It is amazing how well children can play when they have 'nothing' to actually play with.  We see this every week at the beach, they could sit for hours making 'kitchens, meals, soups, flags, houses, you name it, they find it in seaweed, shells, sticks, seeds, coconuts etc.  Love it! 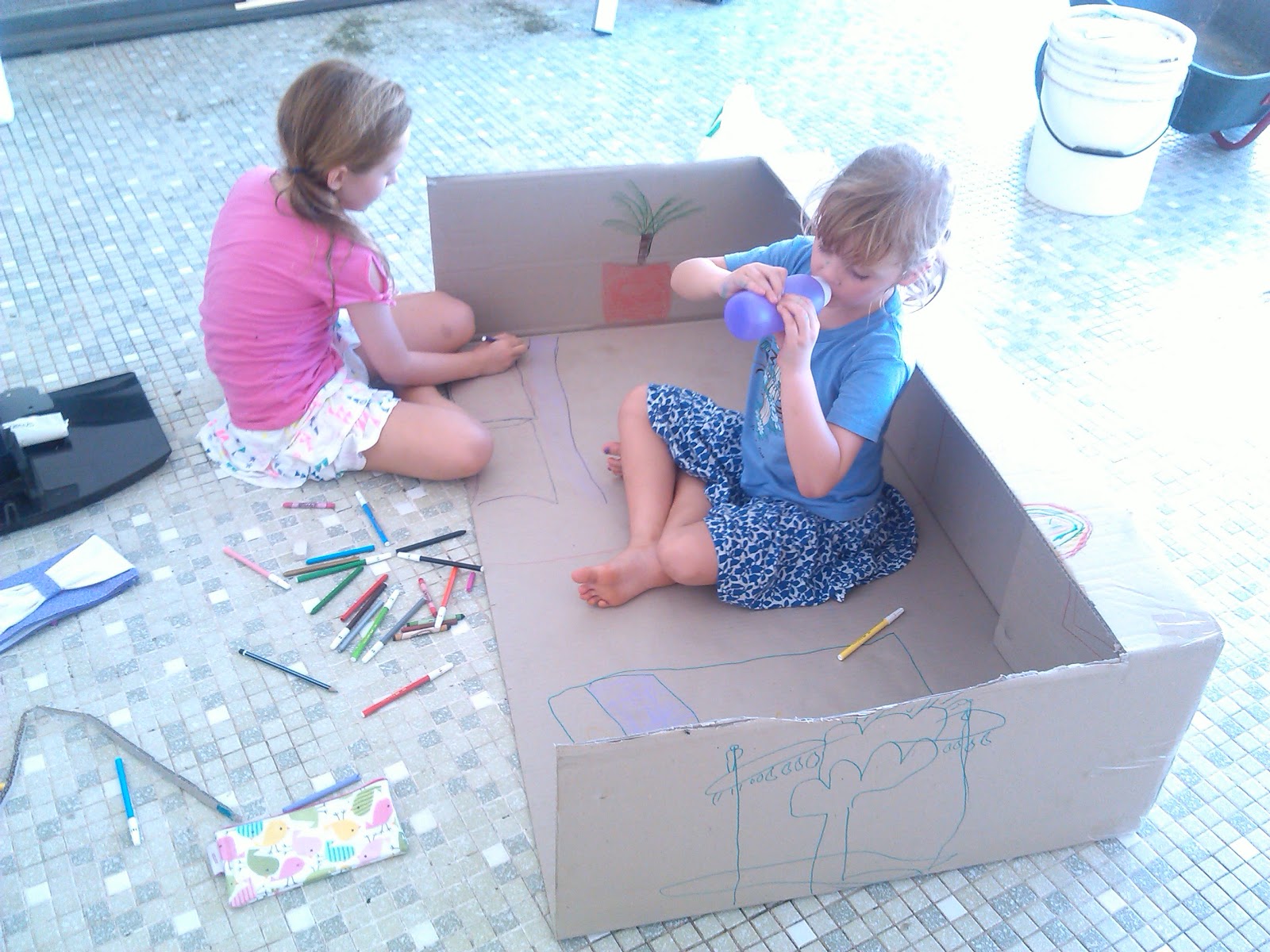 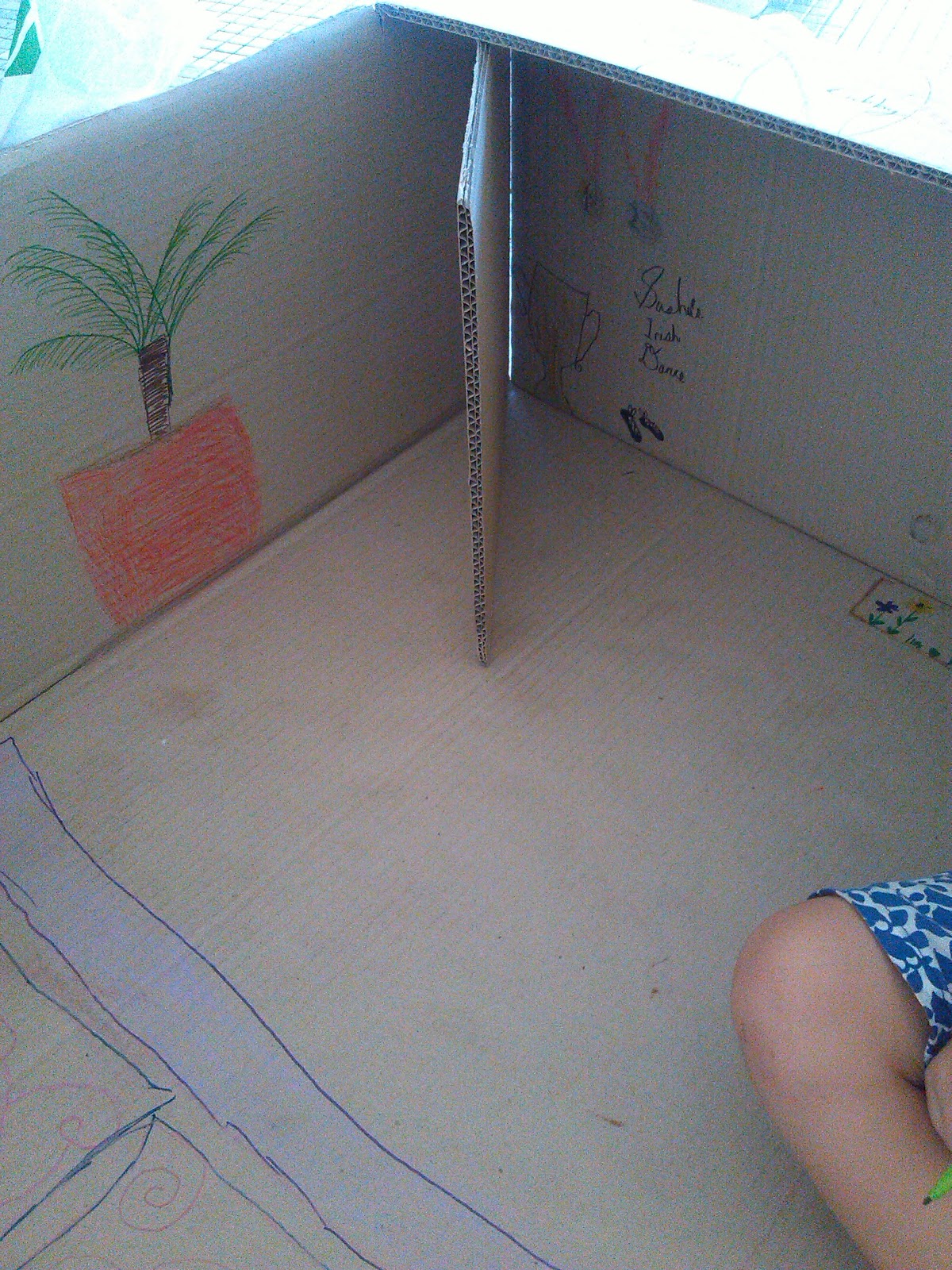 Sasha even included a trophy room for her Irish medals and trophies in her half of the house...haha!
On one of these camp outs Sasha said to me, 'I've chosen my wall colour'.  Yayyy! I was so excited to be able to nip to the paint store and buy some bright pink or lilac or......ombré aqua!  Whaaatt??! I assume you will all know what I am talking about as this ombré phase is very popular at the moment, from graduated hair colours to nail varnish and fabrics to cakes, like this one from Sasha's Frozen party. 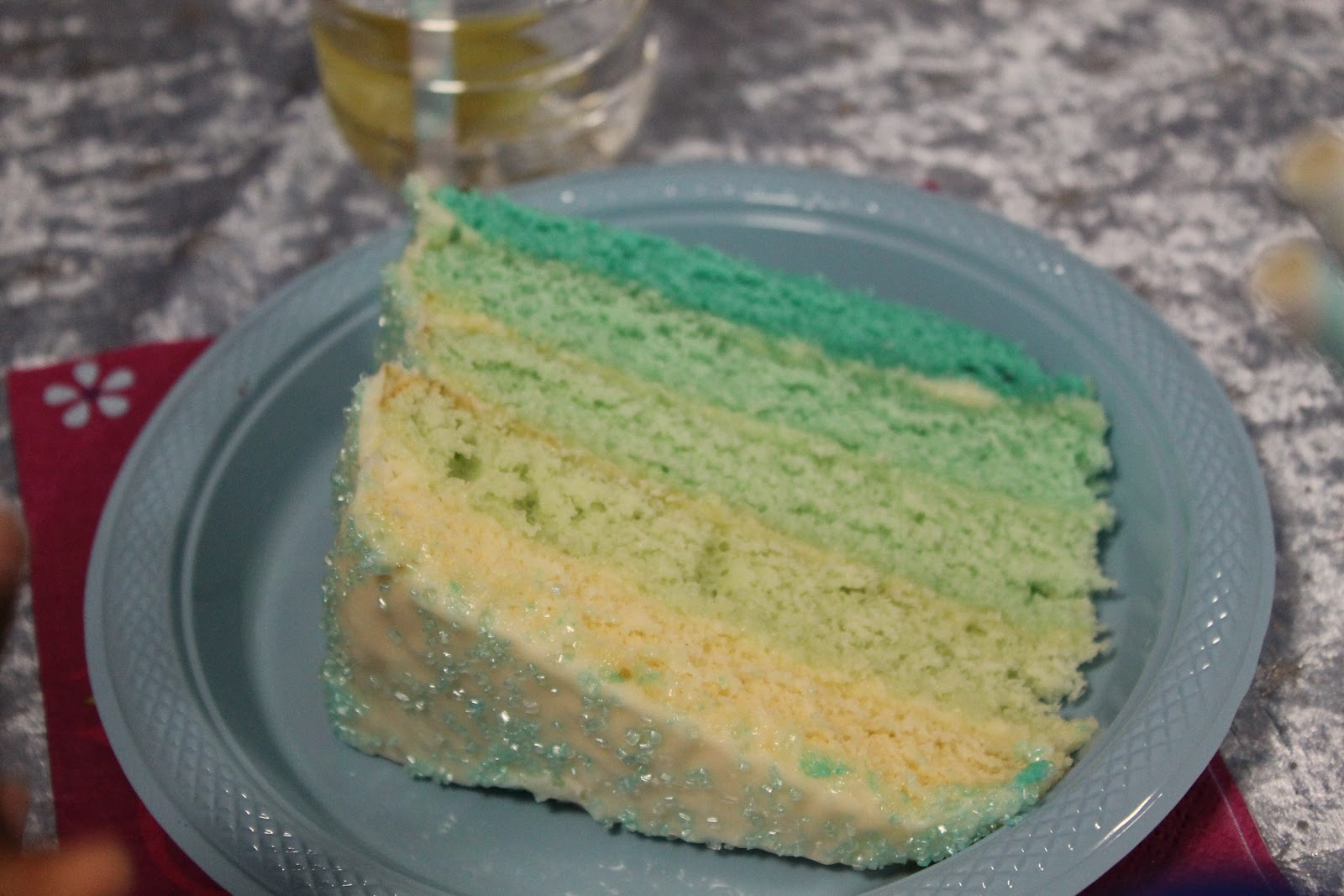 So yes, you're hearing this correctly... my 10 year old was asking for an aqua wall going from light aqua at the top all the way through to dark vivid aqua at the bottom.   Ha!!  I laughed out loud at her suggestion and said 'Honey, there is no way that is happening'.  Not because I didn't like the idea, it sounded awesome but I knew there was no way I could achieve it.  The blending would need to be seamless to pull it off otherwise it could end up being a 1st class entry to the pinterest fail site, you know, like this sort of thing...
She looked so disappointed when I said no but in true Sasha fashion she tried to hide it and said 'I bet you could do it Mum, but it's fine - just do aqua'.  I thought about it some more and decided maybe she was right, maybe I could do it?  I could at least try, if I didnt tell the kids and it all went wrong I could just paint over it and be done with it.  That week I had bought a different white paint to our usual colour and hated the result.  So I had a whole tin of this stuff that we would only ever use as an undercoat, so I went to my paint guys and asked if acrylic paints are the same as the stuff they tint the paint with in store.  (Thinking that I could use up my 'mucky' white by mixing it with acrylics and making my own tints of the aqua).  It was only a small wall and to buy 3 or 4 shades of each colour just for a tiny wall would end up costing a lot of money and producing a whole heap of wasted paint.  The paint specialist said it was basically the exact same stuff as their tints only their stuff was highly concentrated, so essentially a drop to them would be much stronger than a whole spoonful of plain acrylic.  I was happy with that, so bought a tube of teal acrylic paint, 3 disposable paint pots and off I went. 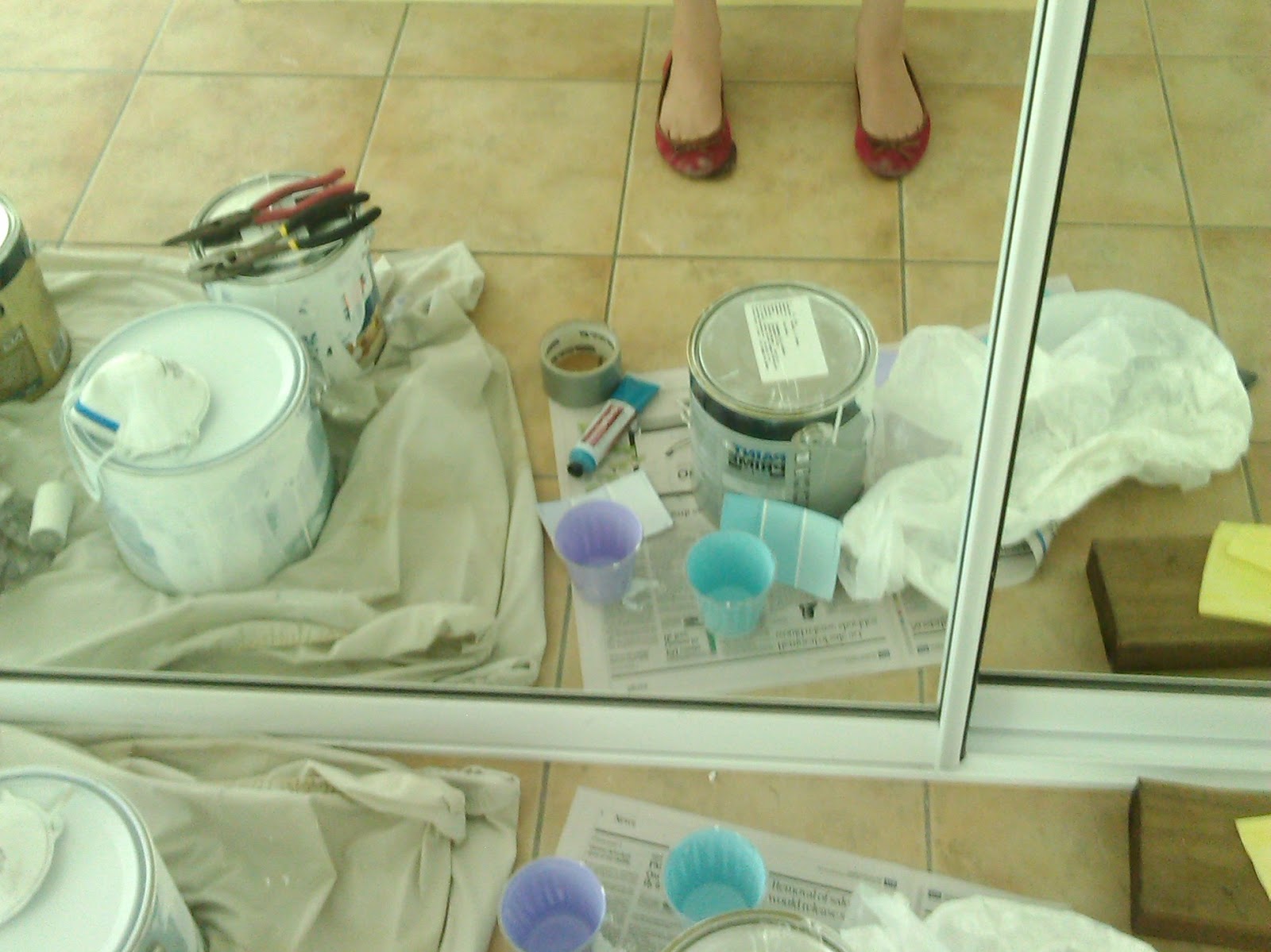 Sasha had previously got the paint chip you can see above from the hardware store when she was looking into colours schemes so it gave me a good idea of where to start.
Unfortunately I don't have any shots of while I was doing this apart from mixing the paints above.  Mixing the paints was tricky as you are never quite sure how they will dry and how different they will look on a wall with different and changing lights.  But really you just have to go for it, you can always add in some tint as you go if needed.  It is a very finicky process, especially up here in the Ville, it is a task that has to be completed in a major hurry as the blending process is key to the whole thing working and you can only blend it well while the paint is wet and it dries pretty darn quick here in the tropical north.  I was on my own here the day I did it so I had to work like crazy to get it all on and blended.  So the only picture I managed to take was when I had marked up the wall... 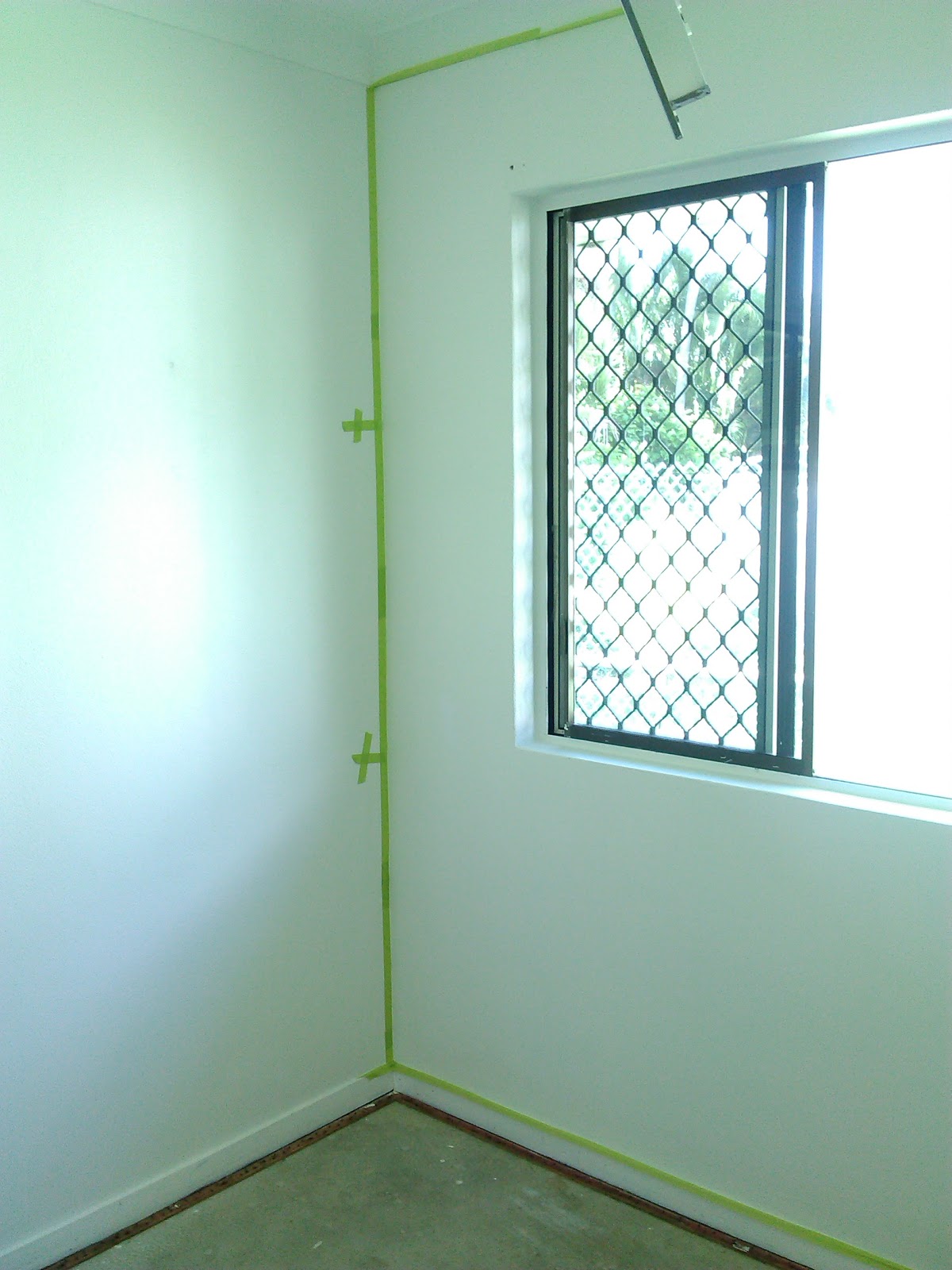 Roughly dividing it into thirds to give me an idea of where to start and stop my different shades
I basically started with white at the very top and then gradually added the lightest aqua in the first section, continued on into the middle then added the mid range colour.  At that point you blend it together...then you blend again and again and again....over.and.over.and.over!!  Until you think you can't blend them anymore...but you do it all again just to be sure.  I was working with about 6 paintbrushes throughout the whole job.  Then the same goes for the next section.  The process is actually super, SUPER easy it just takes a bit of patience and a whole lot of elbow grease.  It was really hard to get a decent photo of the wall, (you were probably expecting a super cool Canon shot - sorry) all I have is this camera phone picture but it shows the graduation without any furniture in the frame so I hope it gives you a good idea.  The carpet guys were coming a few days after completing this, hence why in this picture you can see our lovely new mink carpets, not those smelly old yellow ones anymore hoorar! 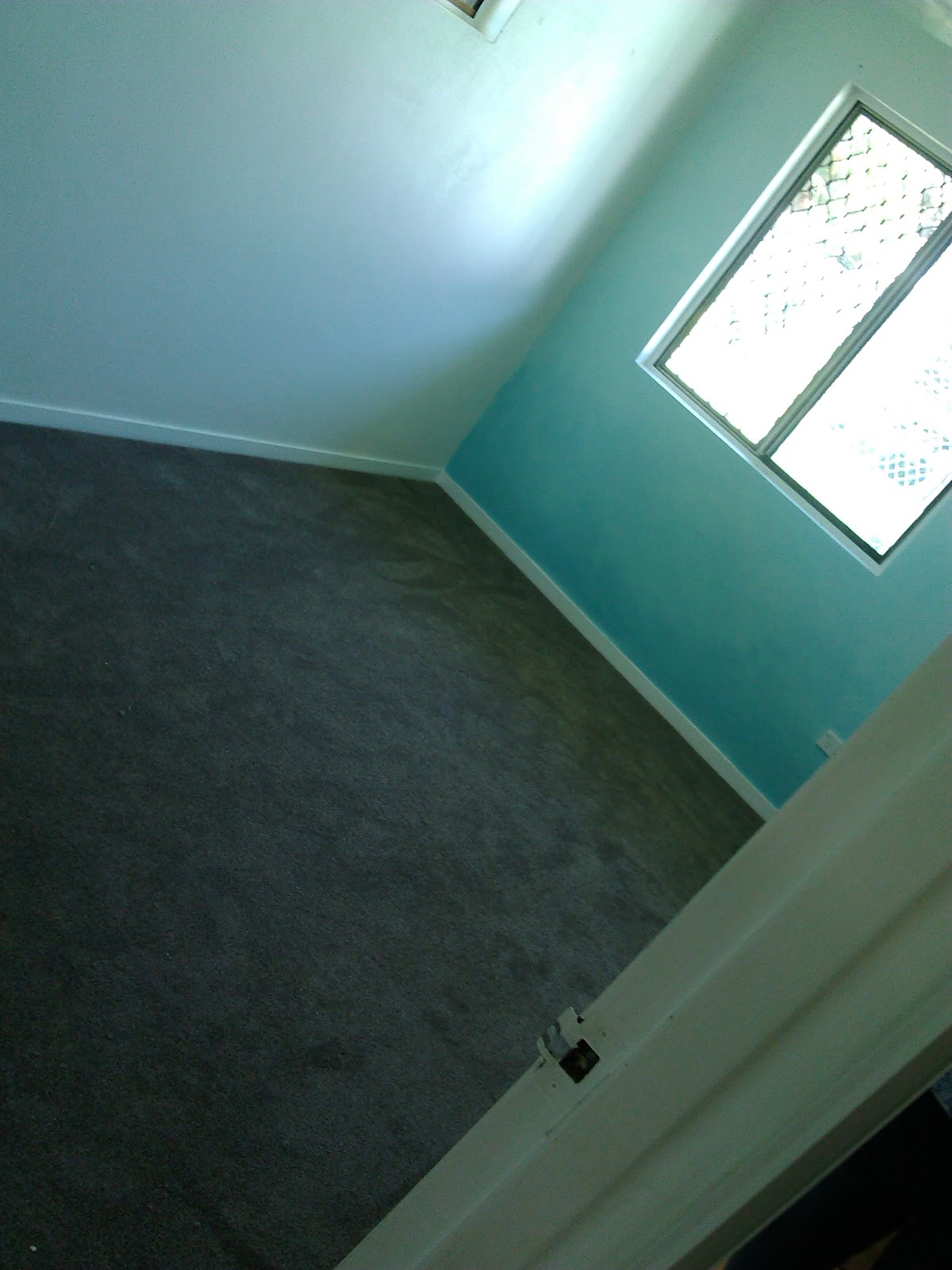 On seeing this room completed I took Poppy's purple colour choice and ran with it in the ombré design too.... 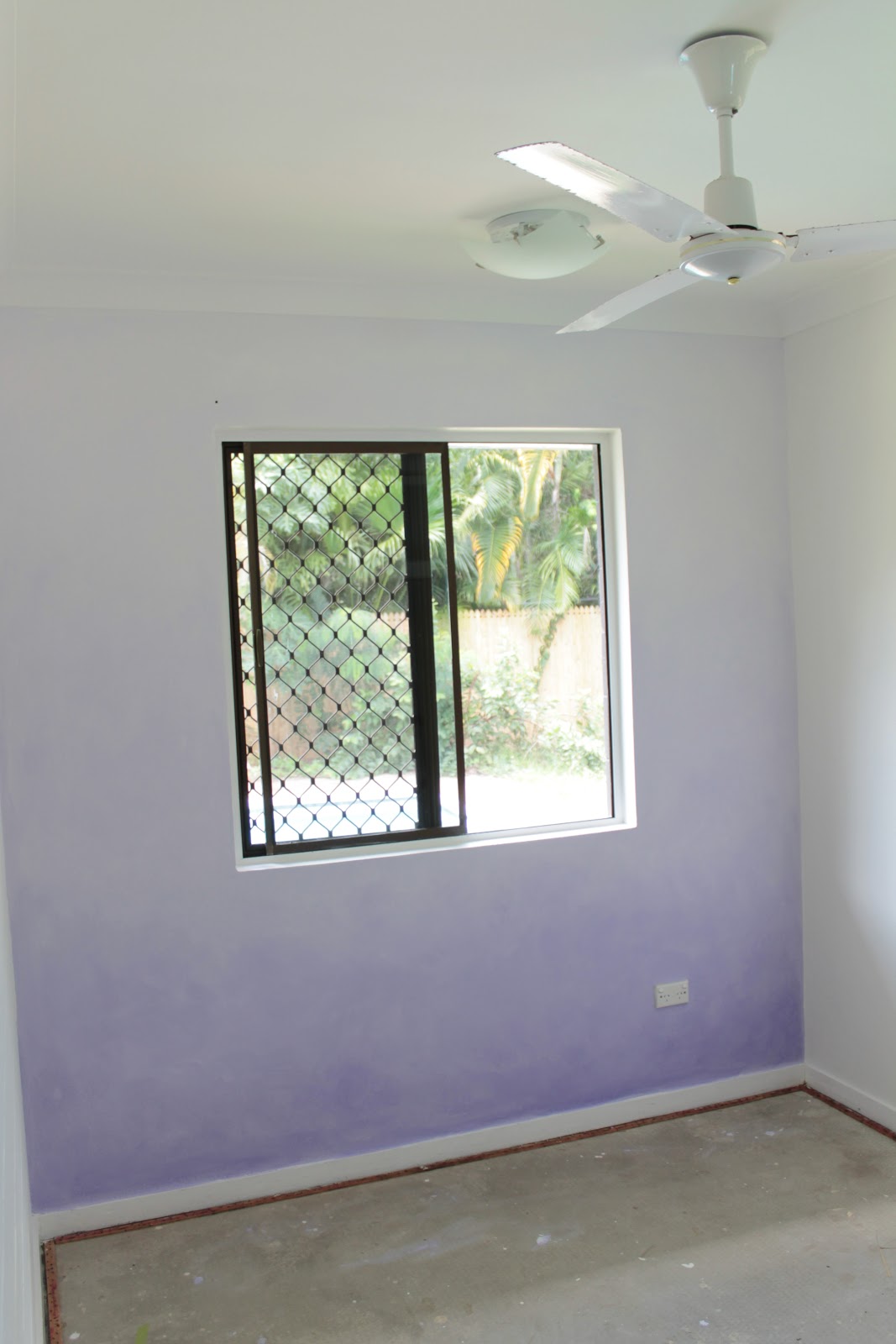 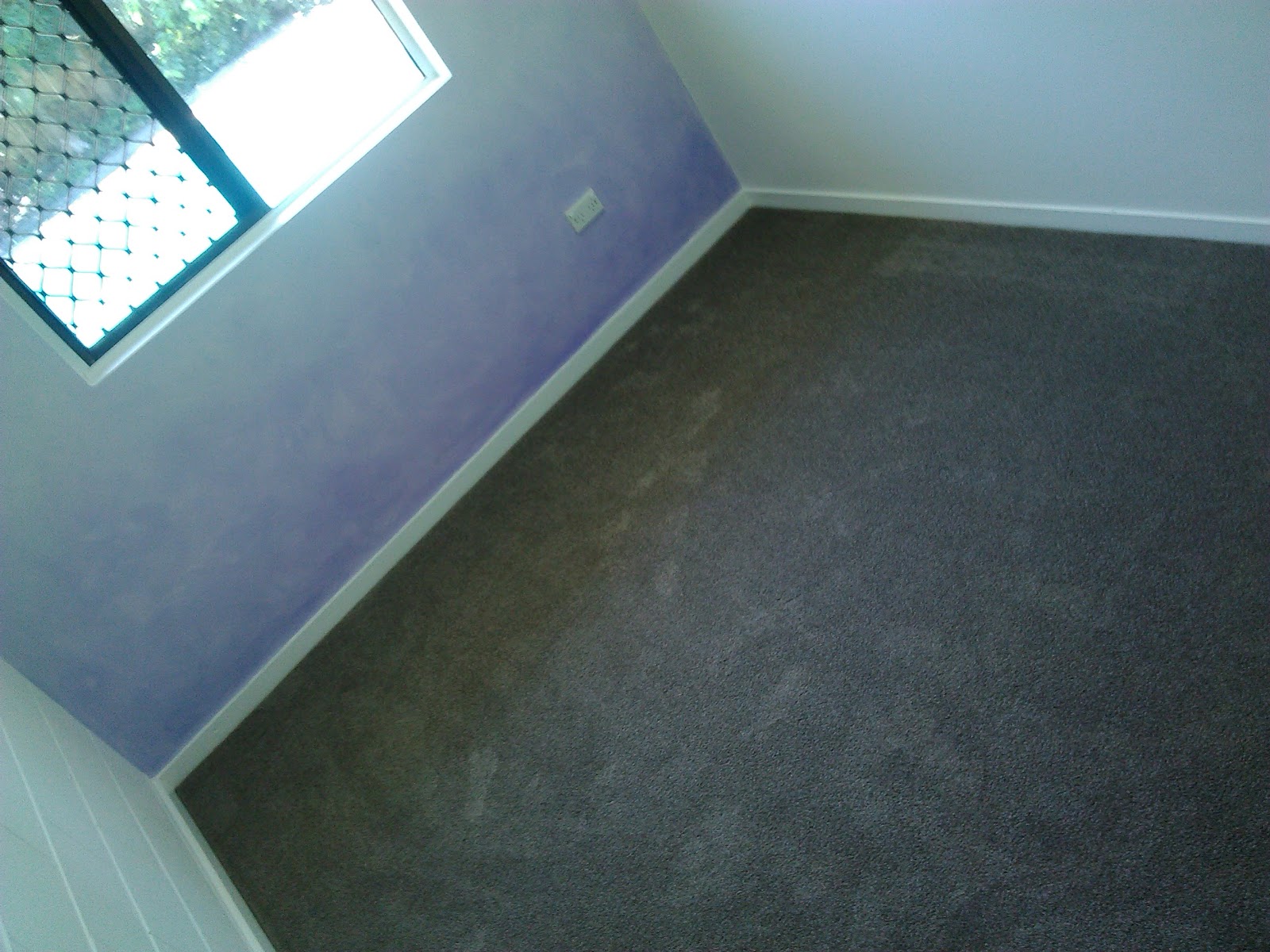 Poppy's didn't turn out as well as Sasha's because I started it a bit too light at the very top.  It still looks great and I loved it even more when the carpets were installed, but it is definitely too light.
But this no longer really matters because...here comes the obligatory Kate face palm....I am doing it all over again....wait, what!???  Yup.  Once we were all moved in we realised that no matter how much I wanted the bedrooms set out in the way I had done it, i.e - the bed going along the back wall rather than going along the 'feature' window wall, it just doesn't work.  These rooms are very narrow as we have previously mentioned and no matter how we set the rooms out, the only way they really work, in terms of allowing enough space and not looking over cluttered, is to have the bed running along these walls... covering the lower part of all my lovely hard work.  It is such a shame, but it is easily fixed.  When I have time I shall repaint these walls white and re-produce the same effect on the back wall.  Or I may even go across ways instead of top to bottom to counter any furniture covering it up, that way you will always see the graduation.  Anyway until that happens the rooms still look fab either way and it was great fun to do, it looks awesome and the girls, especially Sasha, love it.  When I mentioned it to Maddi (House Rules) way back when we interviewed her for the blog she said, 'Damn I wish I had known that before I went on House Rules I so would have used it'
Darn it I could have sat there at my telly shouting...'Yayyyy Go Maddi - that's our Sasha's idea!'

As always, thanks for reading!
K
xx


Ps - Col asked me to include a few lines on Poppy's Yearly Question Book as he said no one will have a clue what I am talking about.  We have a special book that we write in every year.  We start with a photo of her and her age, then ask her the same series of 6 questions; where do you live, favourite colour, favourite food, favourite TV show, her best friend's name and what she wants to be when she is older.  Then there is a page for a drawing, a page for some writing, and a page for us to jot down her favourite activities.  It's a lovely way to keep track of changing ideas and dreams but also a great keepsake for her to have when she is older.  The front of the book is just the most perfect quote too... 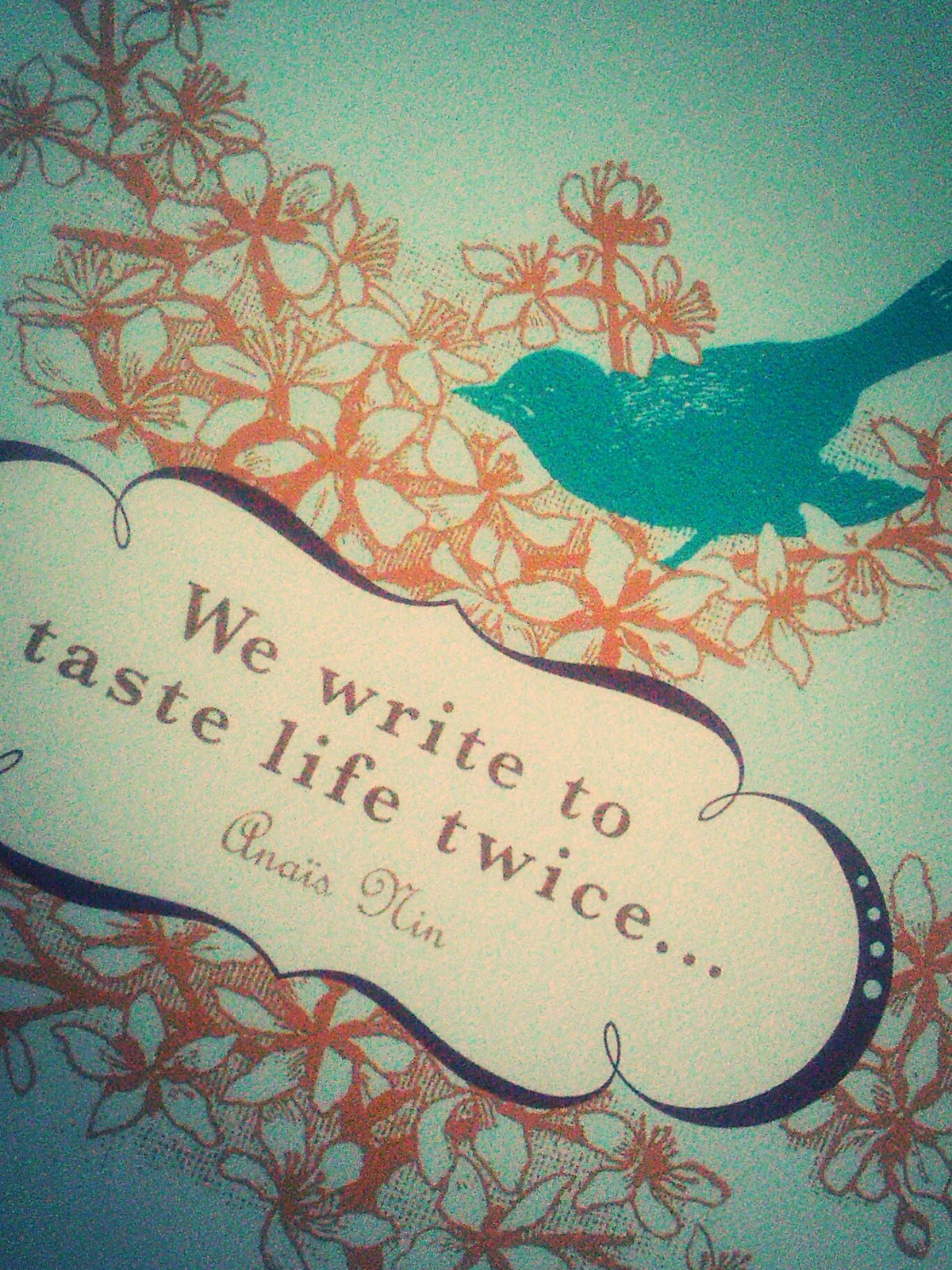