So finally (yawn) after all this time I can finish off our bathroom series.  Yayy! Apologies for the long gap, since our last post we've had the 3rd term school break here in Australia and enjoyed 2 weeks of no school, no work (blog or renovating) and lots of play, beach, sand, sun and sea... a post on that will follow. 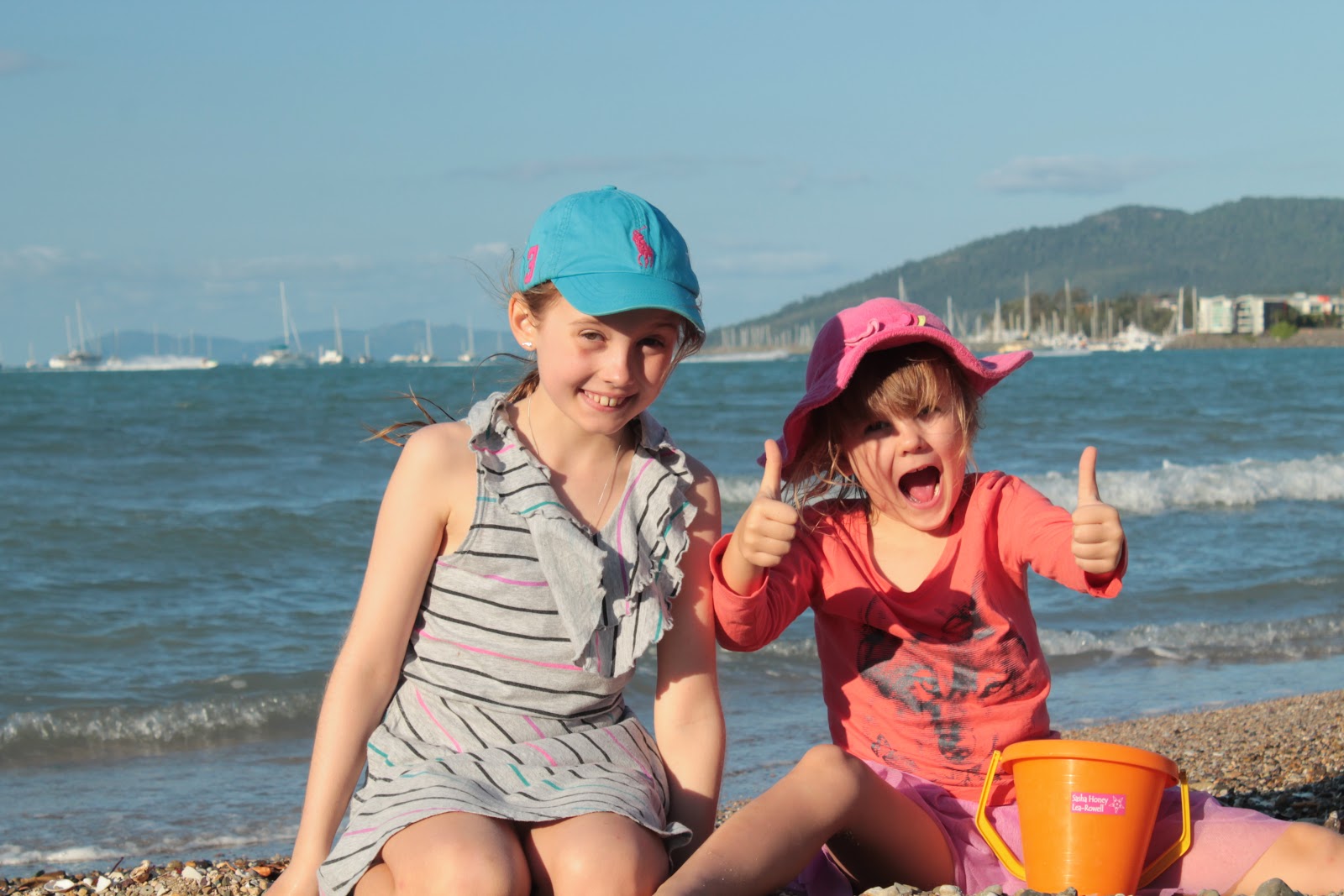 But for now I knew I had to get this post written up and sent out...asap!  Of course, things are never that easy or straightforward when it comes to me and my writing so it will be a bit more than just a few before and after pictures.  We have a few shots of the final details being completed, a few shots of our failures (face palm) and a few shots of our successes to get through first...
When we planned how we wanted this room to look we took lots of inspiration from the display villages around town.  We loved the simple white and brown/sand tones that many had used in their bathrooms.  But we had to remember that this room was essentially going to be the girls bathroom (once we complete our full renovation down the track) so we didn't want it looking too 'old/mature' with browns and beiges but at the same time didn't want it all stark and white.  We also had a budget to keep in mind,  after seeing the great works completed on shows like The Block and House Rules you tend to get a bit blindsided by the wonderful designs and completely forget that the hexagon tiles and wooden baths are in another league altogether.  So once we had decided on a floor tile we went back to get some more advice from our tile lady about what we should match it with.  She came up with the idea of using the wall version of our chosen floor tile to be continued up one wall. 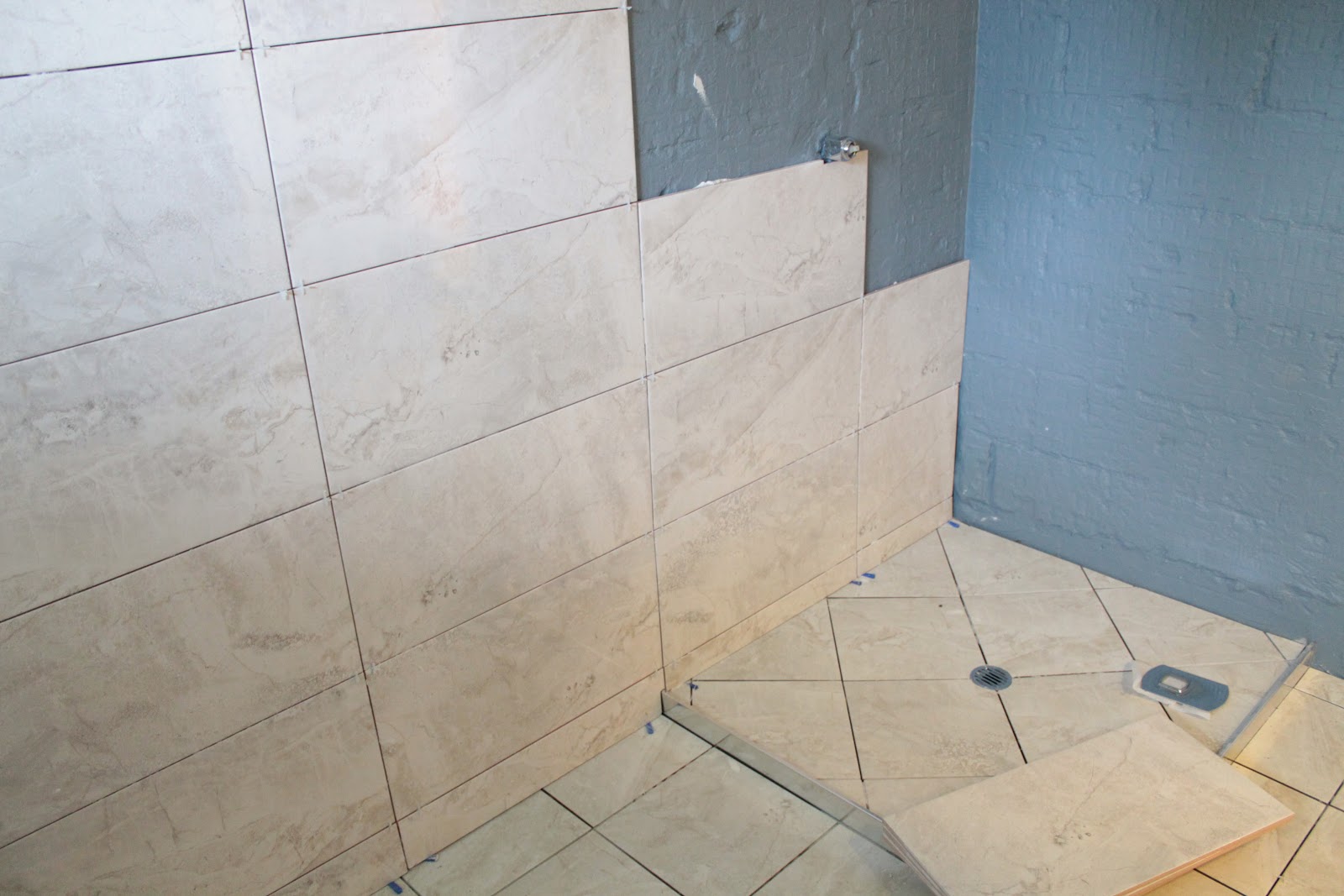 She explained that with it being a small room, you can give the illusion of more space by continuing the floor tiles up the wall facing you as you enter the room.  I have to be honest I wasn't completely sold on it to begin with.  Col and the girls loved the idea and our tiler was happy that it would work well, so I trusted them all and went with it.  It did work well, and it leaves the bathroom open and airy instead of possibly more enclosed like the darker tiles we had originally chosen, but without being a total white wash either.
Fail #1
The toilet walls were originally tiled about 3/4 of the way up but as we didn't want tiles in there we thought it would be easy to render the walls after the tiles were taken off.  Our tiler did it for us, we said we wanted a 'rough job' as the rest of the house has been 'roughly' rendered so although we knew we'd never match the finish of the rest of the house we thought it would be ok. 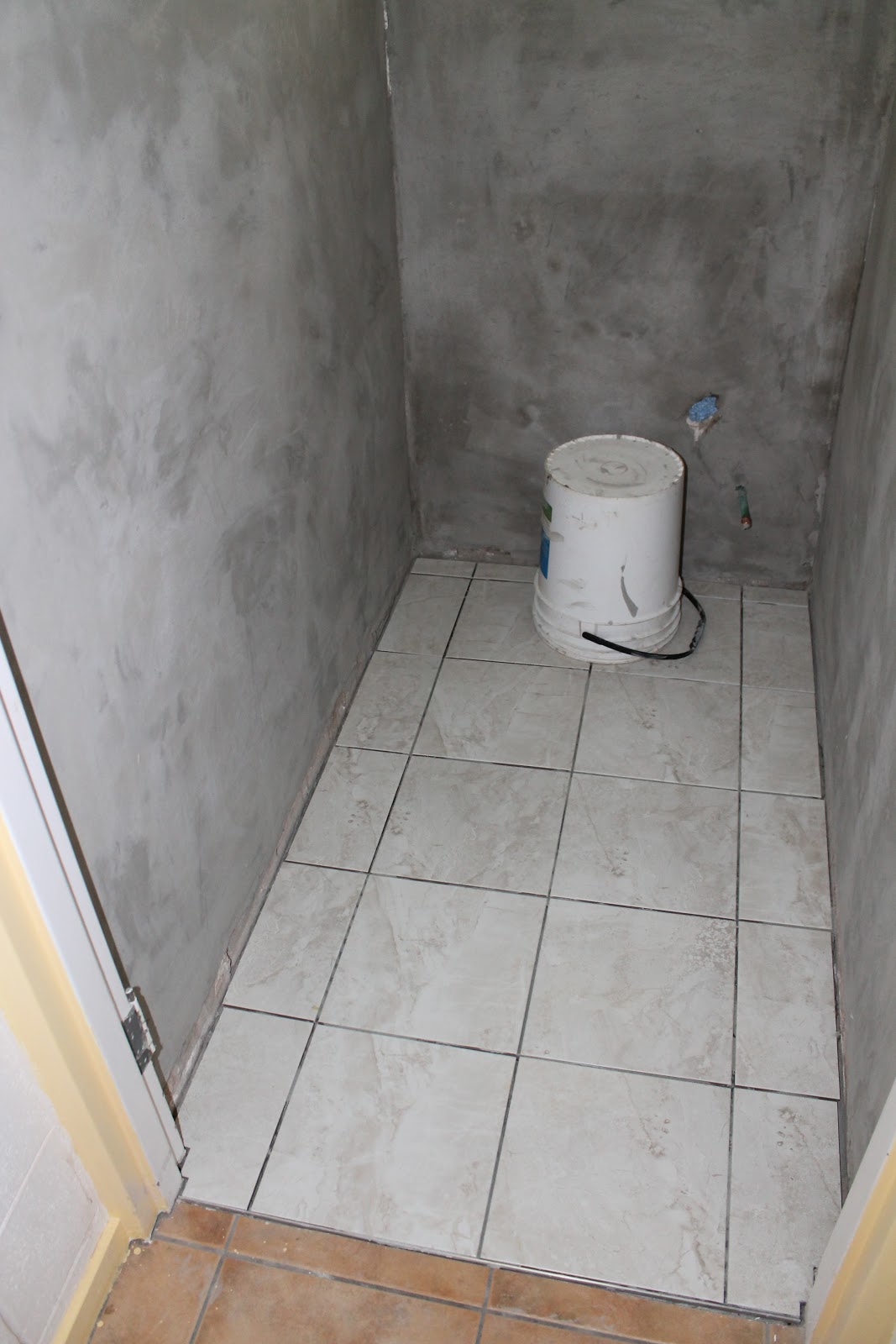 Unfortunately, it's not ok, not at all ok!  We hate it!  But at the end of the day it is just a toilet, so at the moment it will stay as it is until we can think of another option.  In the photo below, once it was painted it looks just fine, and it does from a distance and with the light on.  But close up it's not a great look, I look at it every day and moan about how crap it is (no pun intended).
Fail #2

Strictly speaking this one isn't our fault so a 'fail' is probably a bit harsh.  But anyhow, keeping on the toilet theme, when it comes to choosing a loo you can't just pick any old throne, there are a number of factors that determine what will or won't work in your particular space.  Design, set-out distance, price, size of the room etc.  So when it came to choosing ours all the ones we wanted were either not the right design, or were out of stock.  As it was the most crucial part of our reno so far (remember, as soon as the toilet was installed we could move in) we had to go with whatever we could find.  Our bathroom store rang around all their suppliers until they found one of only 2 toilets that would work for our space and budget in the Townsville area! 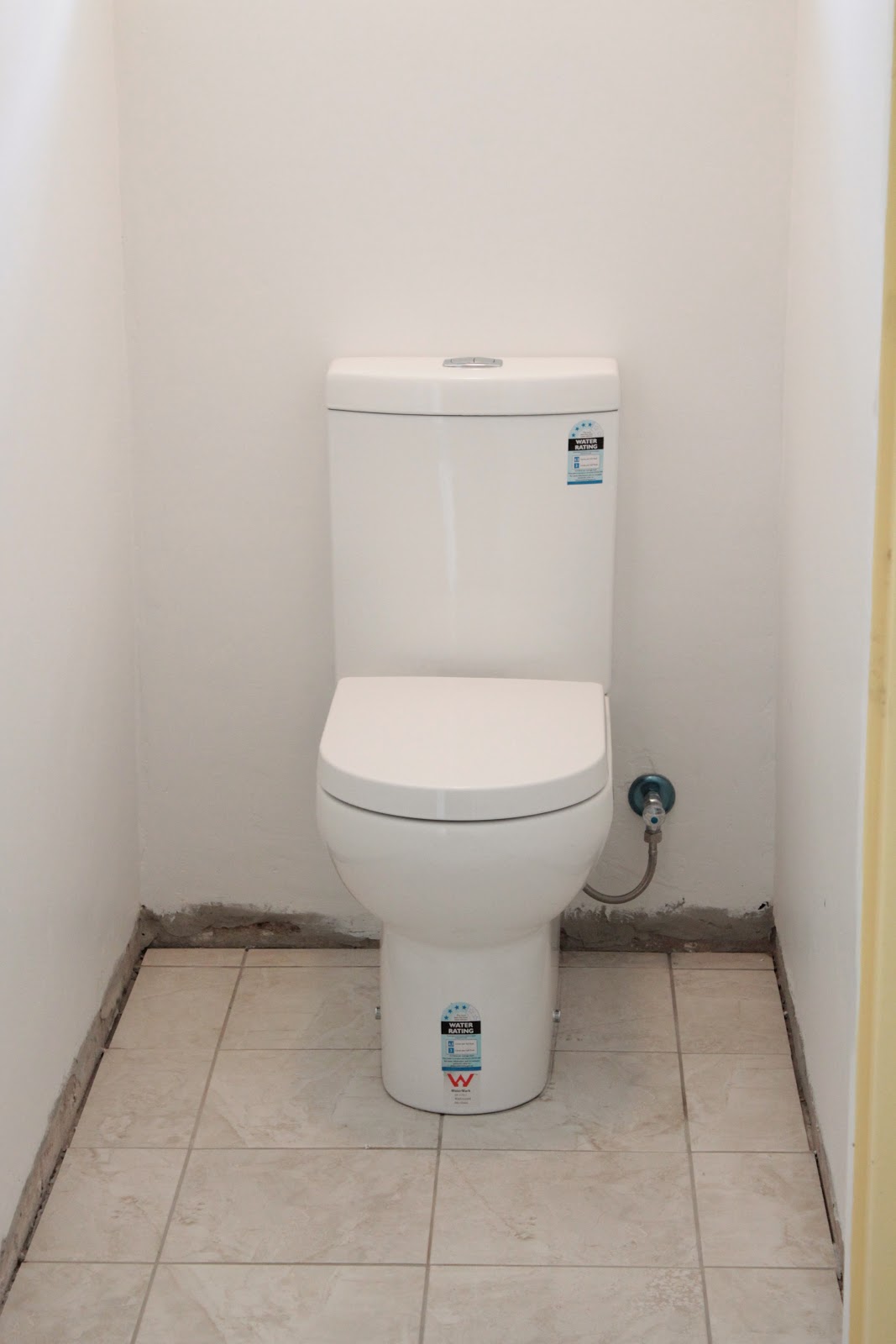 Again, we hate it!  When I say we, I mean Col.  I don't particularly like it but Col totally hates it!  It will be going eventually, but for now it will have to stay until we have finished everything else and then it will be replaced.
Fail #3
Kinda my fault this one.  When it came to tiling the wall behind the vanity, the tiler asked me if I wanted the tiling to go all the way up the wall (as is mostly standard now) or whether I wanted a space left for the mirror.  There was a space left for the mirror beforehand so I asked what people usually do.  He said 'either', so as I already had the mirror picked out we decided to leave the gap and add the mirror afterwards.  Even though he had all the measurements, what we hadn't banked on was the fact that our mirror had a top and bottom frame but the sides were just the glass itself.  In other words there was no way it would sit right in this gap.  It was made to be hung over the top of tiles.  We could have made it work by siliconing down both sides to fill the gaps at the edges but to be fair it would look a bit shoddy. 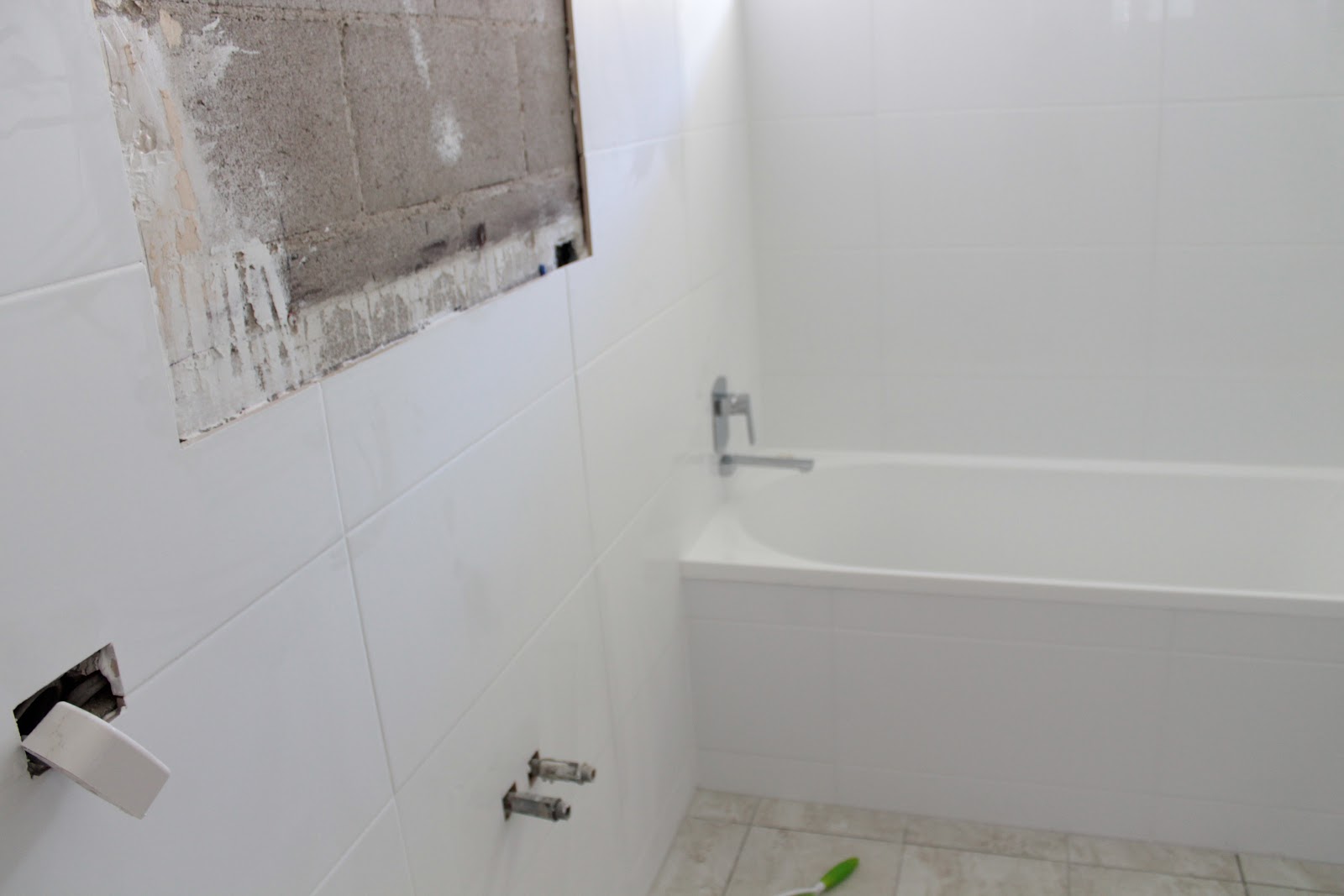 So I stared at this unfinished room for ages*.  Every day moaning about how I wished I'd tiled all the way up.  I took the mirror back and went back to the drawing board in terms of a solution.  After 4 weeks of staring at this awful gap I called my tiler and said "I have to change it"!  He came back and took down the 9 tiles surrounding the hole and replaced the  whole lot.  A silly and potentially costly mistake (luckily our tiler didn't charge us to change it all)  but it was all good in the end, and allowed me to have whatever mirror I wanted...more on that below.
*Note I should just say, we had no basin for ages as our vanity which had been on order since the 3rd week into the reno was delayed for FOREVER and ended up taking over 2 months to arrive.  So we had to use the bath as a basin for the first 5 weeks that we were in the house!
As for the successes. Well, the whole bathroom is a pretty big success but my piece de resistance is my mirror.  I LOVE IT!!  I'd had an idea in my head for a mirror all along but could never find anything like it.  I made a mock up one out of a little box and started asking around as to where I could find one like my sample. 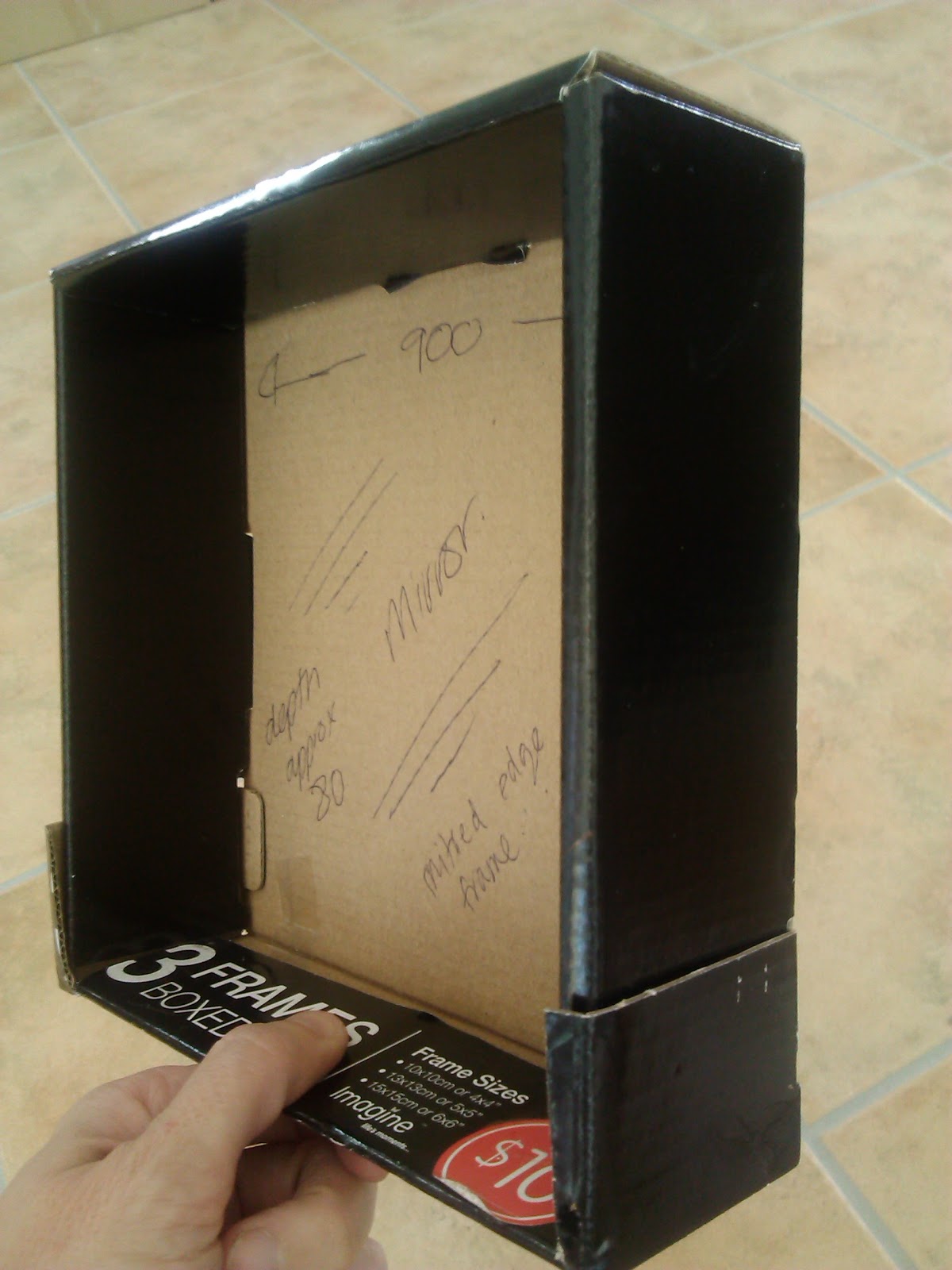 It is such a simple design I found it odd that it couldn't just be bought off the shelf.  One store had something similar but the finish wasn't right and the quality wasn't great, certainly not worth the $400 they were asking for it.  So a couple of people suggested going to Studio Dubbeld - the old Kingfisher Furniture store - to see what they could do.  Joel Dubbeld is a master craftsman.  He heard my idea and straight away said "Too easy, that'll look great"  Success...major success!  Not only could he do what I wanted, but I could choose the exact size I needed including the depth of the frame and had the choice of 12 or more different timbers.  I chose the most gorgeous Camphor Laurel, and made the frame of the mirror just deep enough to carry a few small decorative items.  Just look at the grain and colours on it, it's totally gorgeous...love, love, love it! 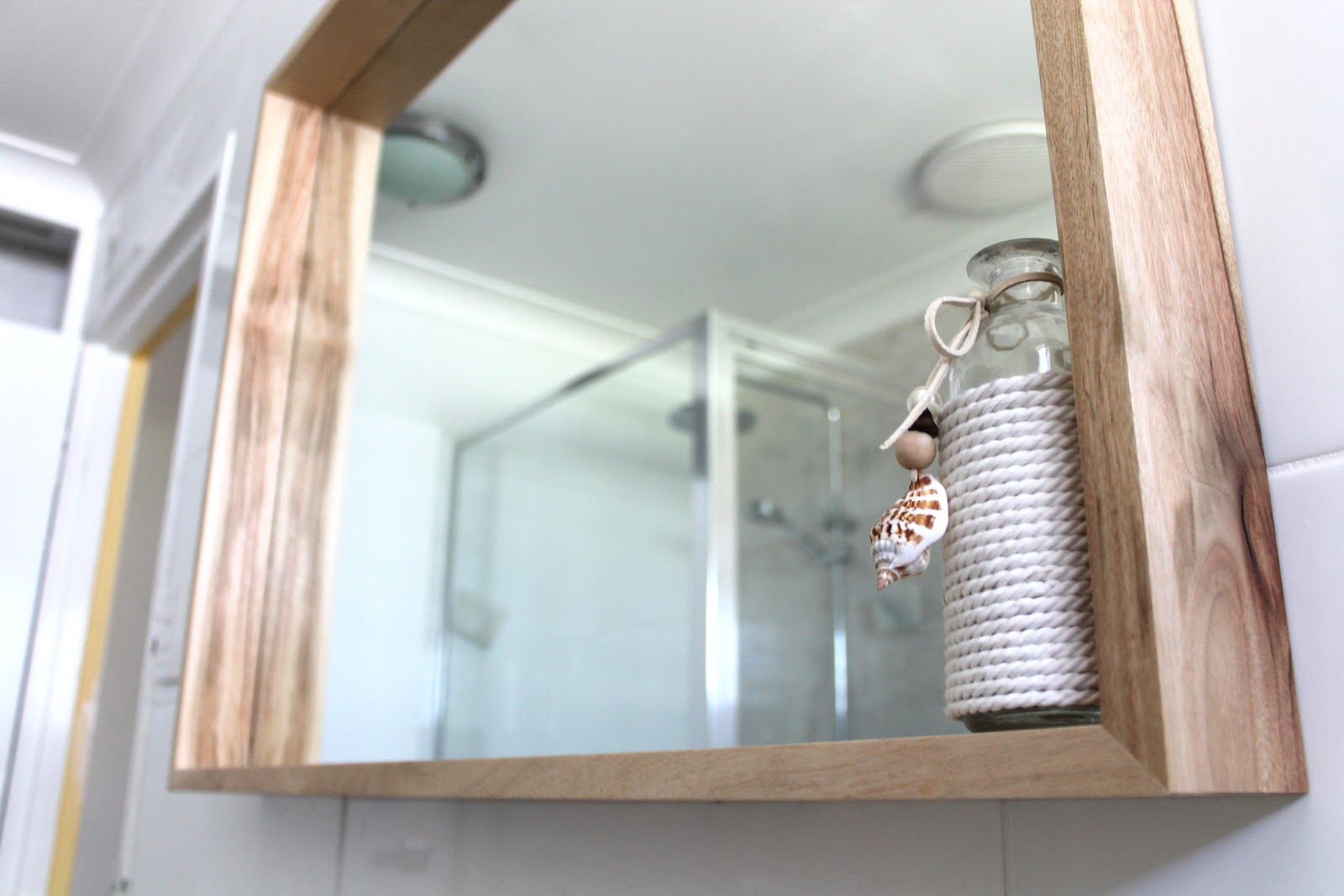 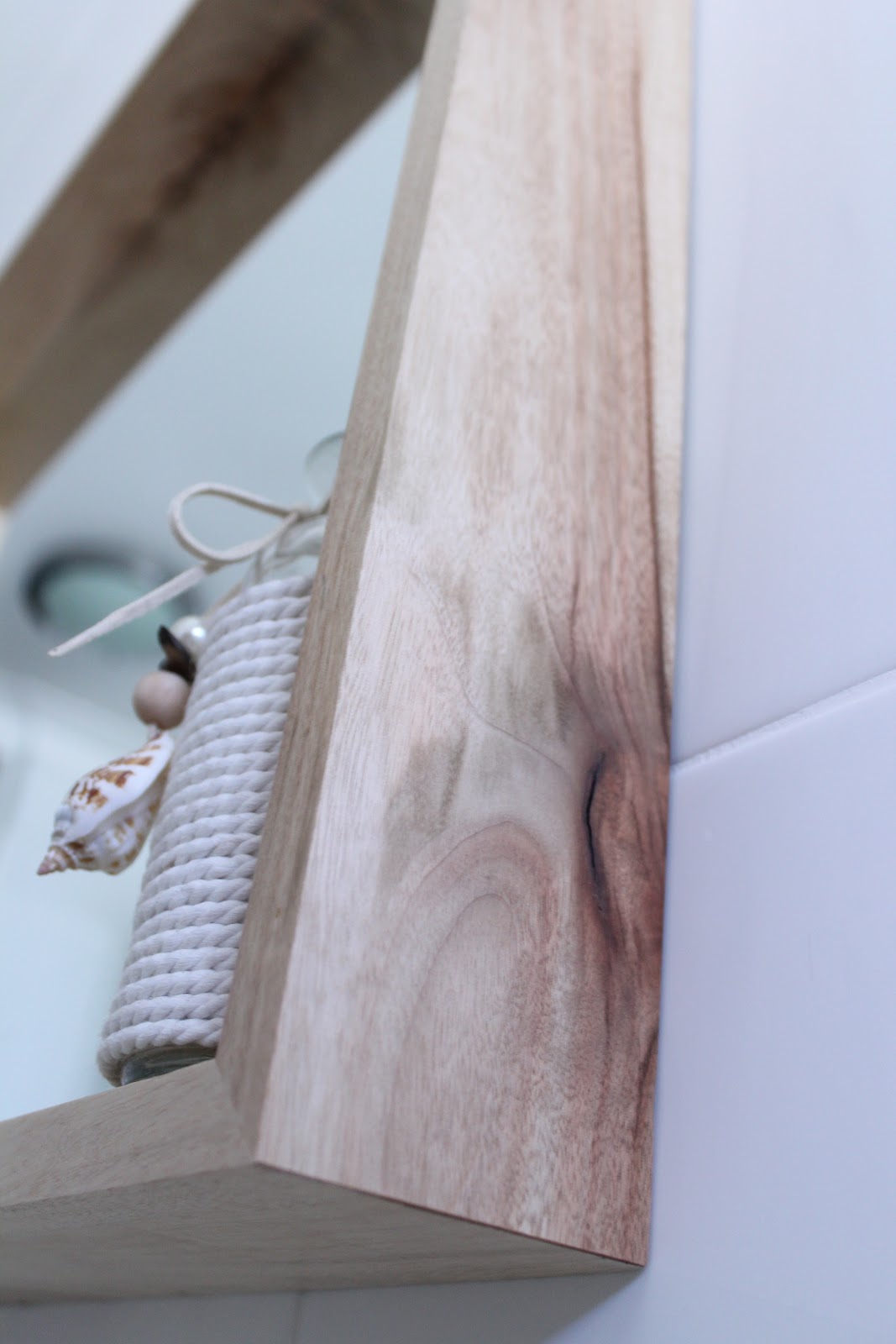 So with all those bits and pieces out of the way we can finally reveal the full bathroom all re-done and ready to go!  It has been a long process both in the making and the blogging of this room.  But I am glad you all stuck with us and I hope you like it as much as we do.  So far we have had some great reactions from visitors so I am hoping it looks as good as we think it does!
The long awaited before and after's.... 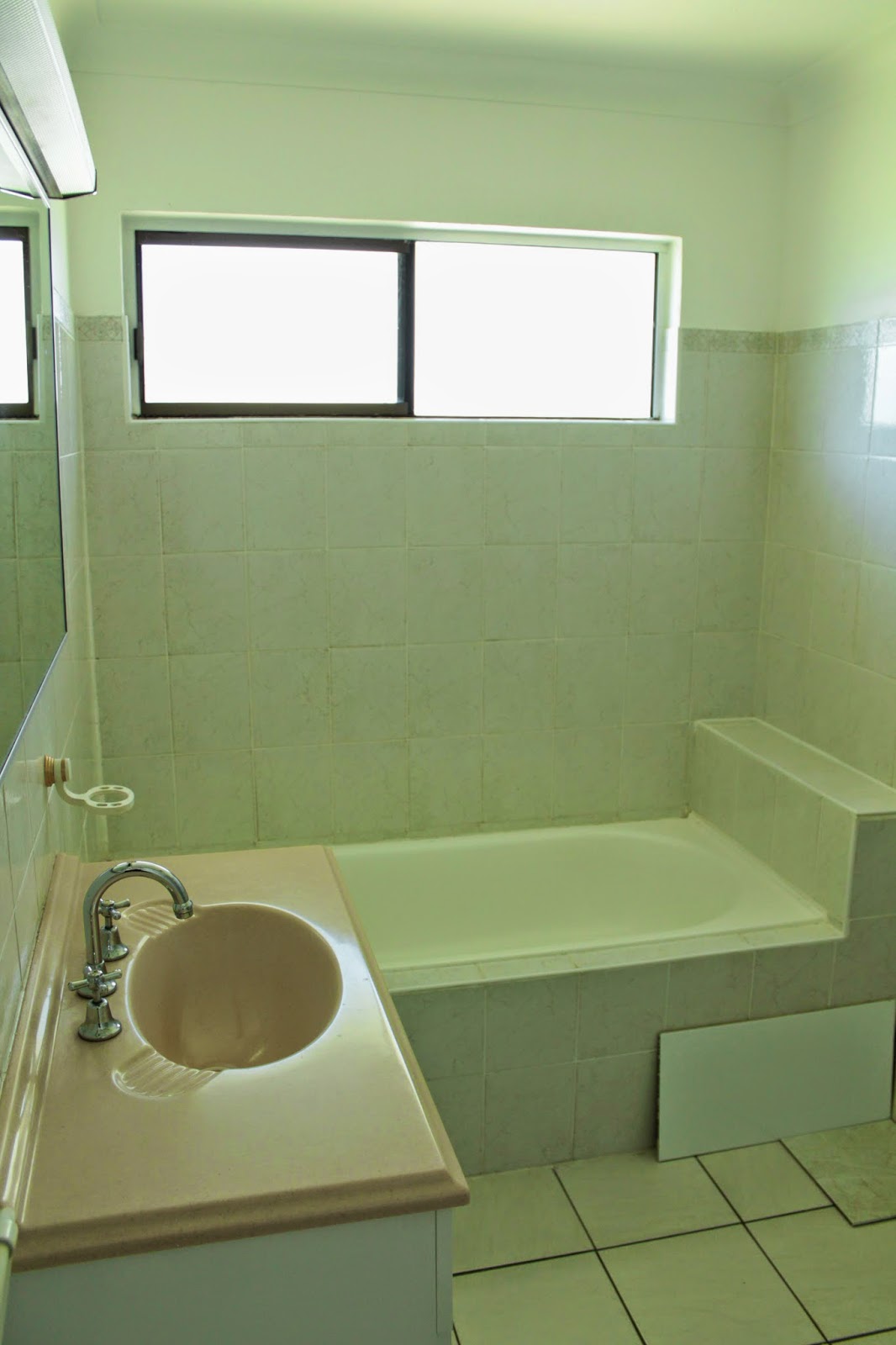 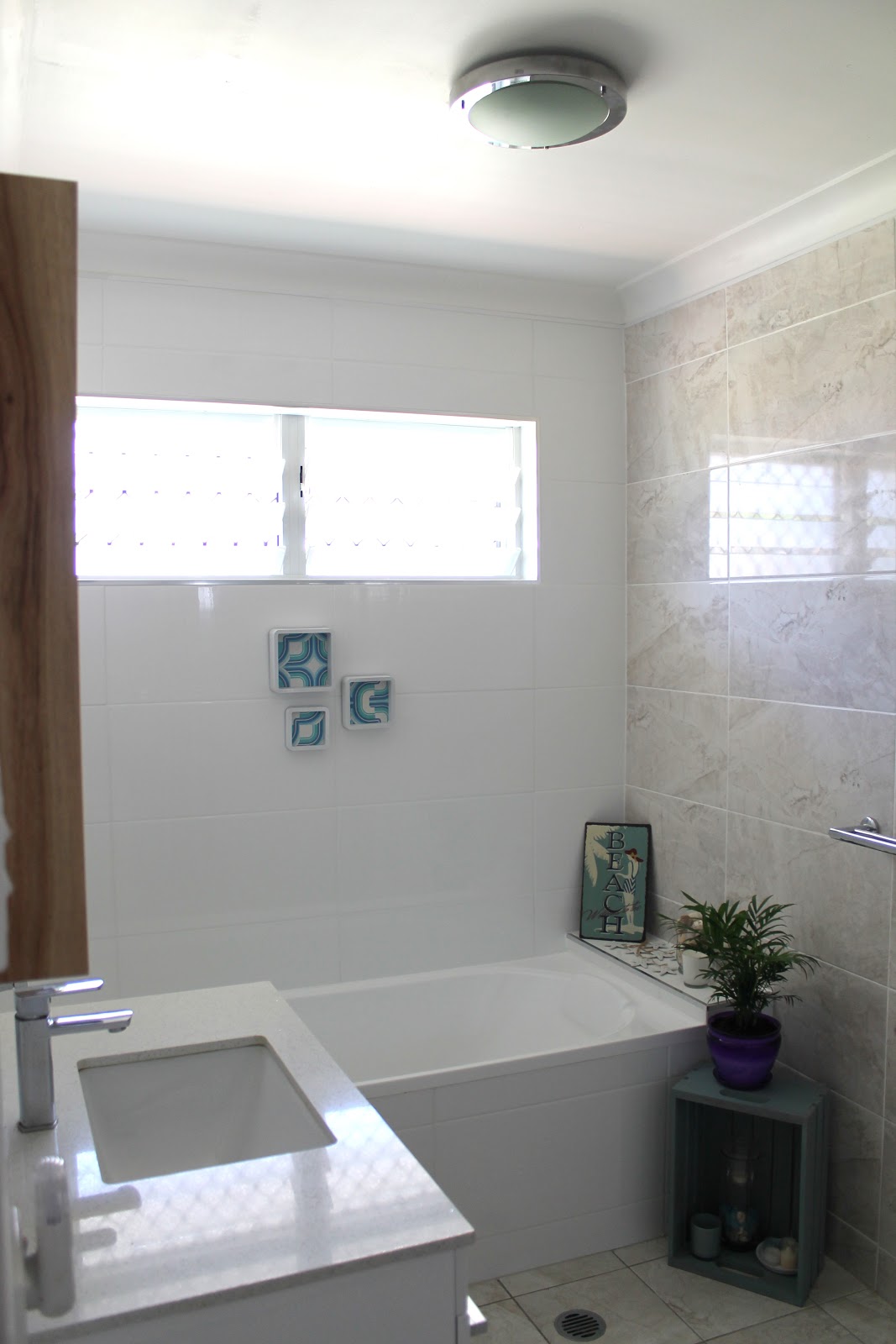 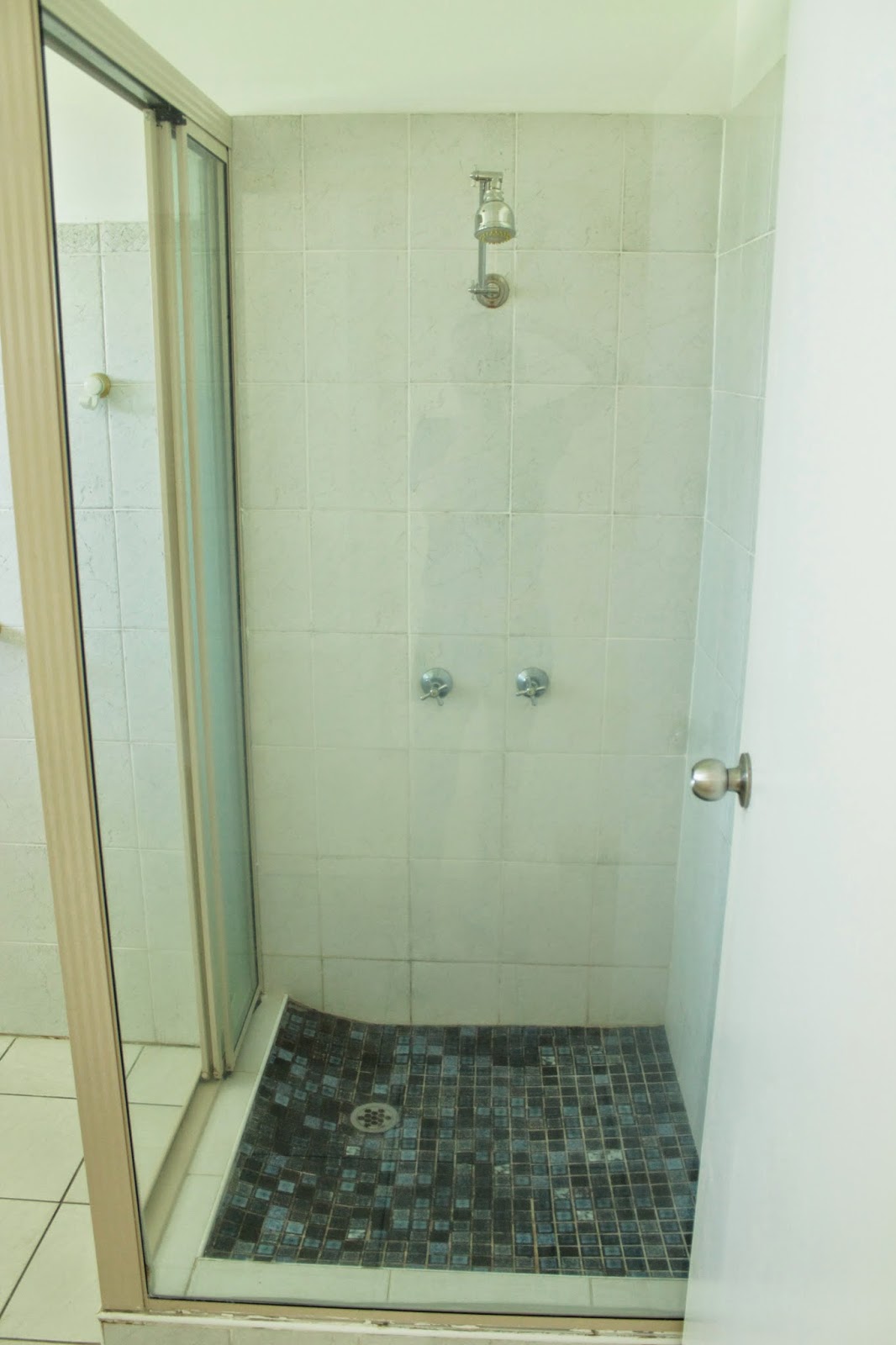 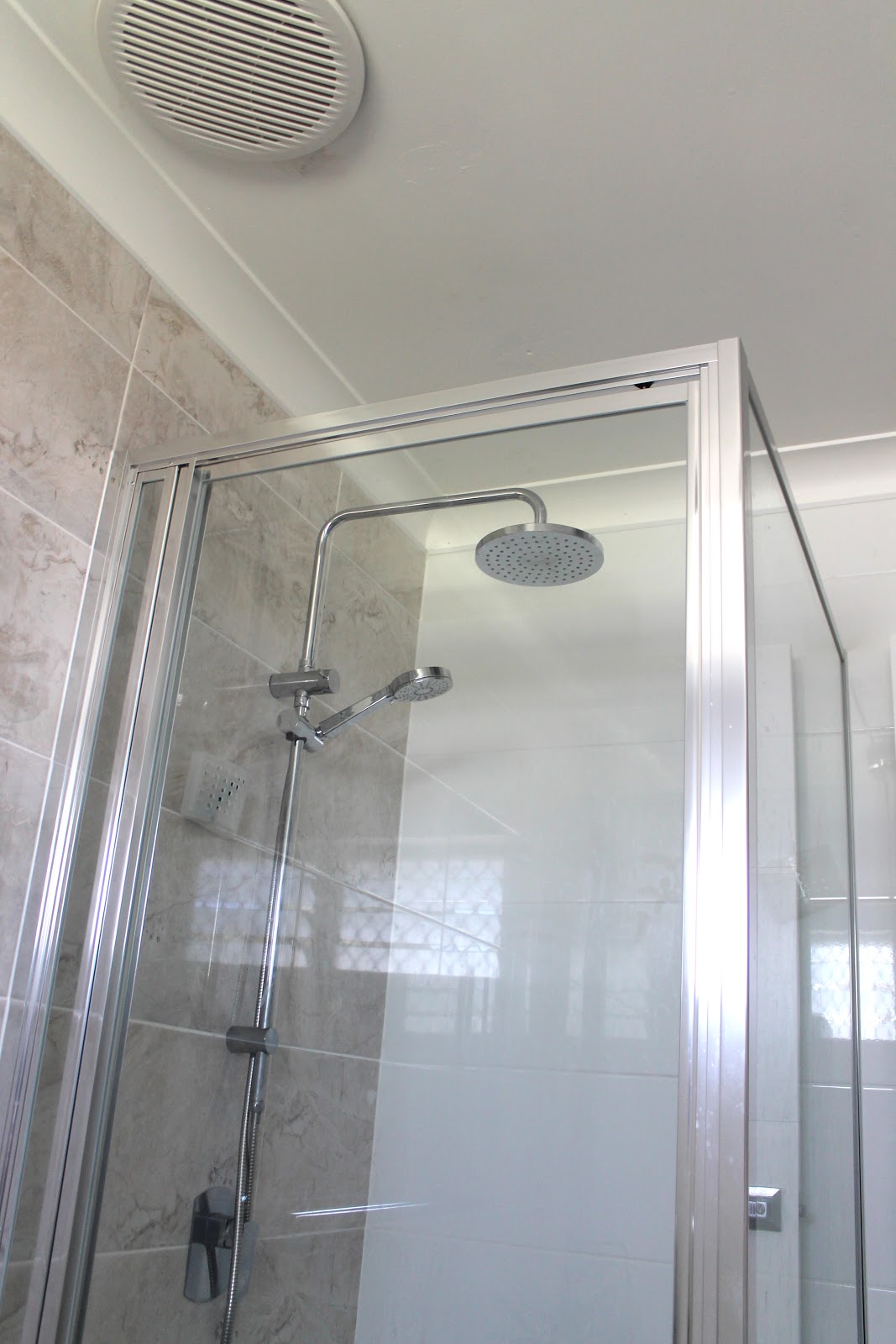 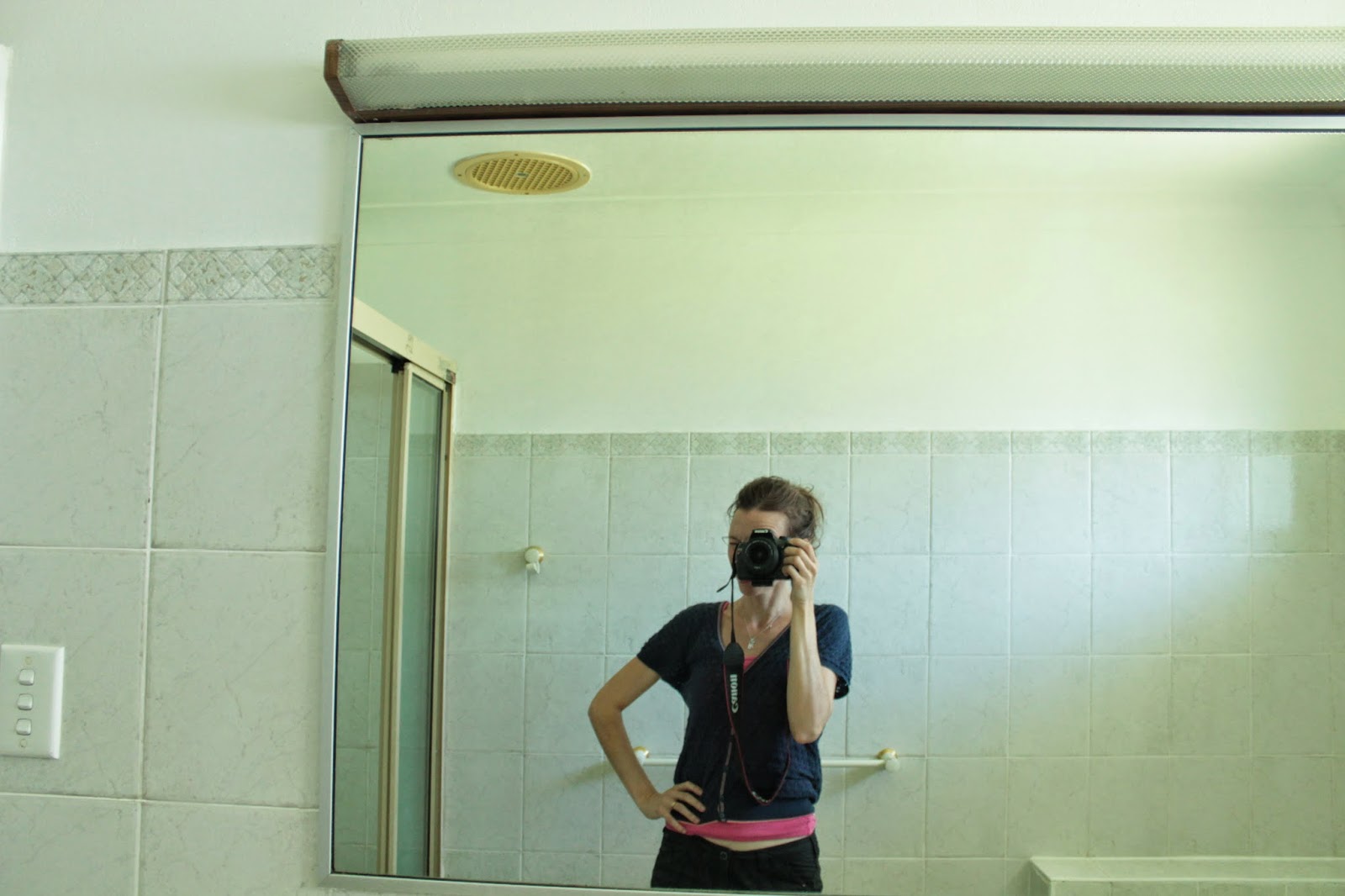 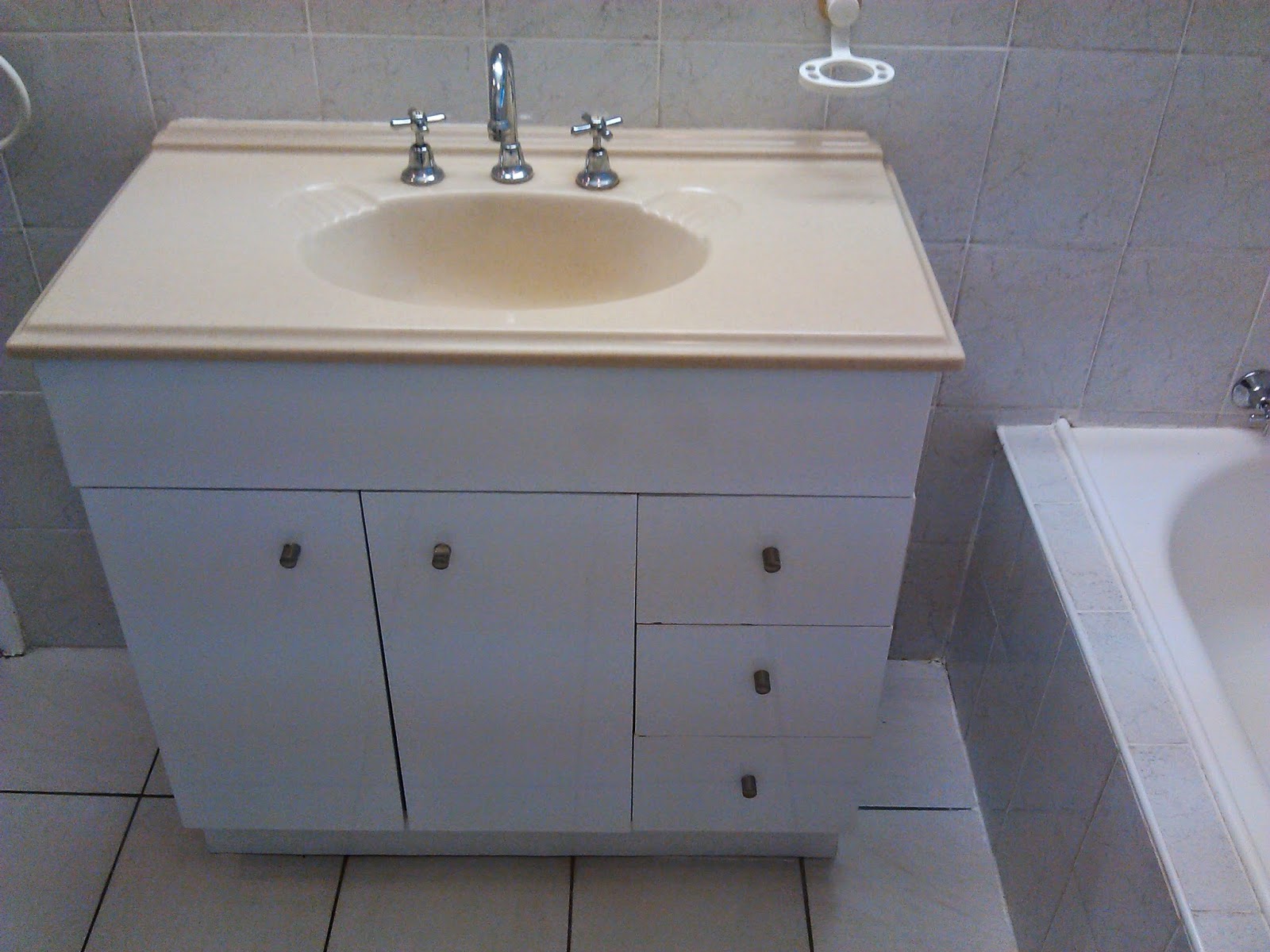 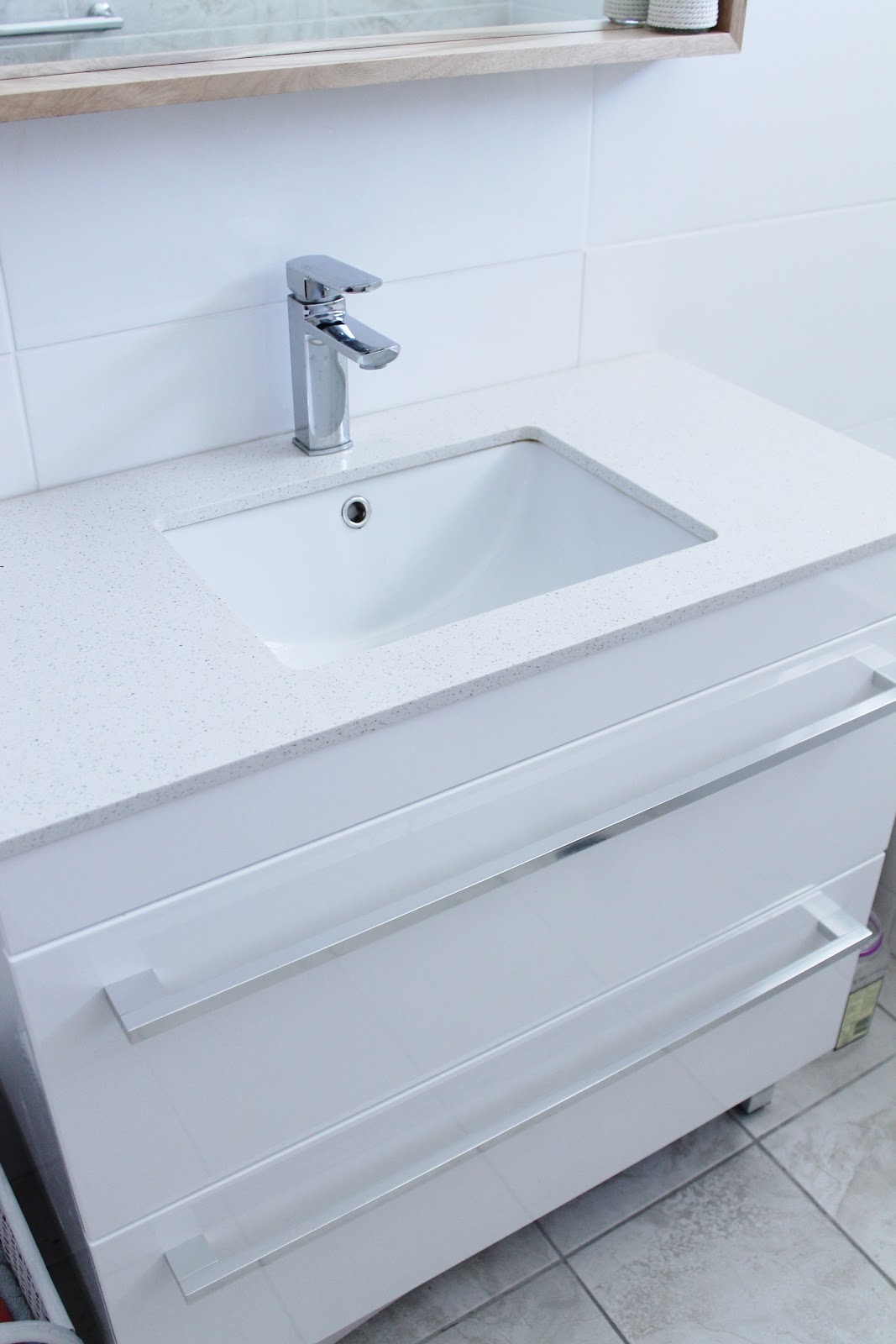 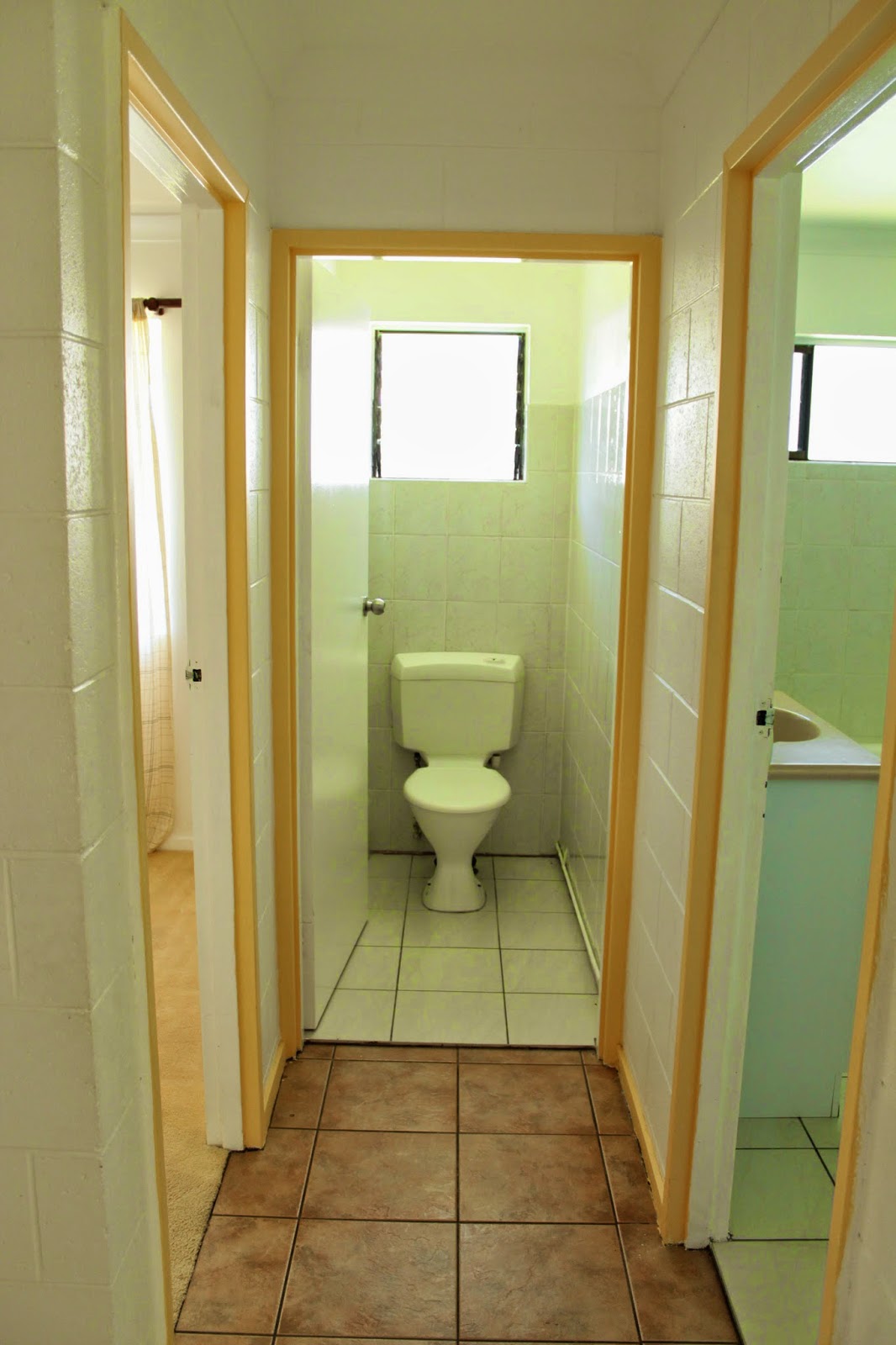 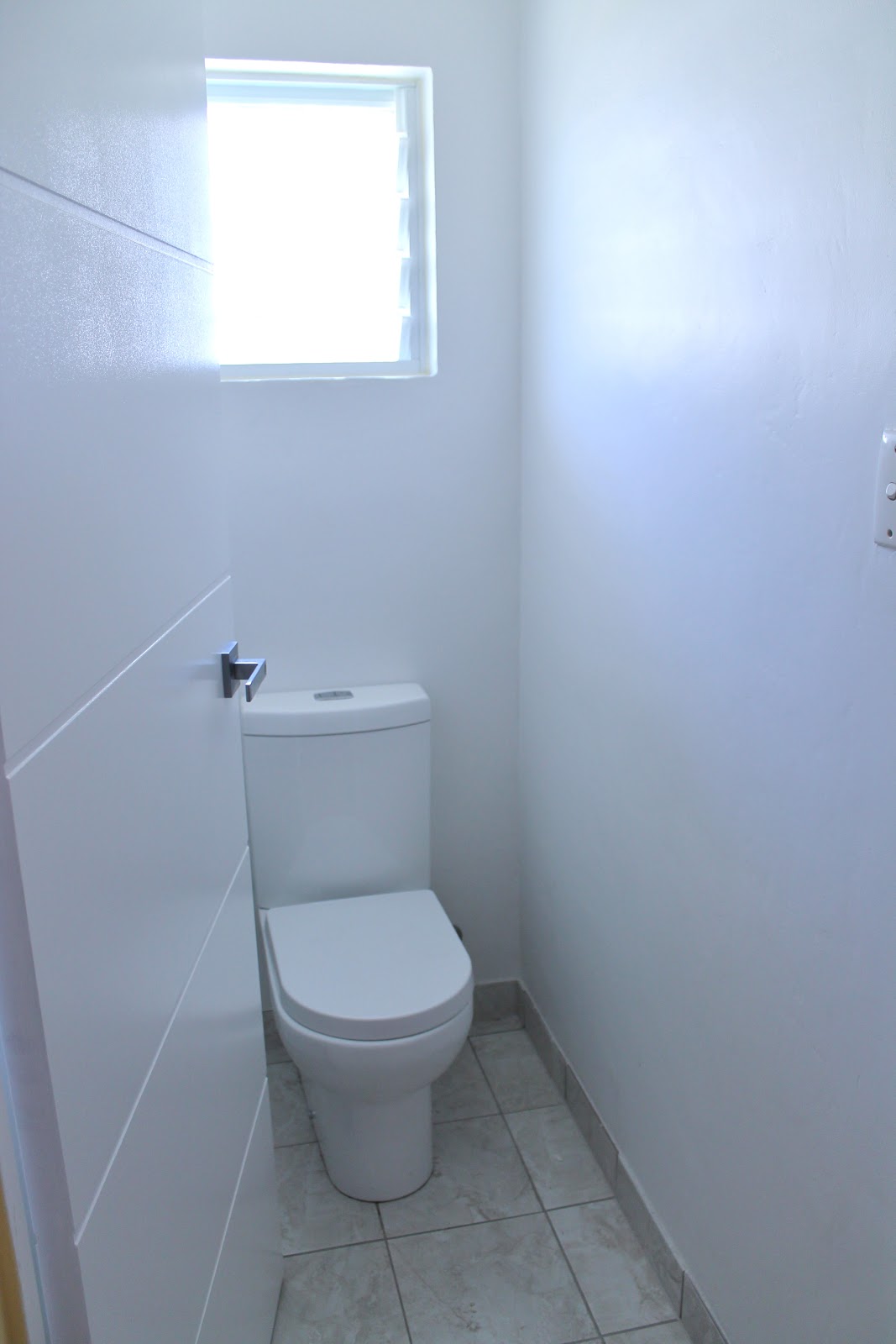 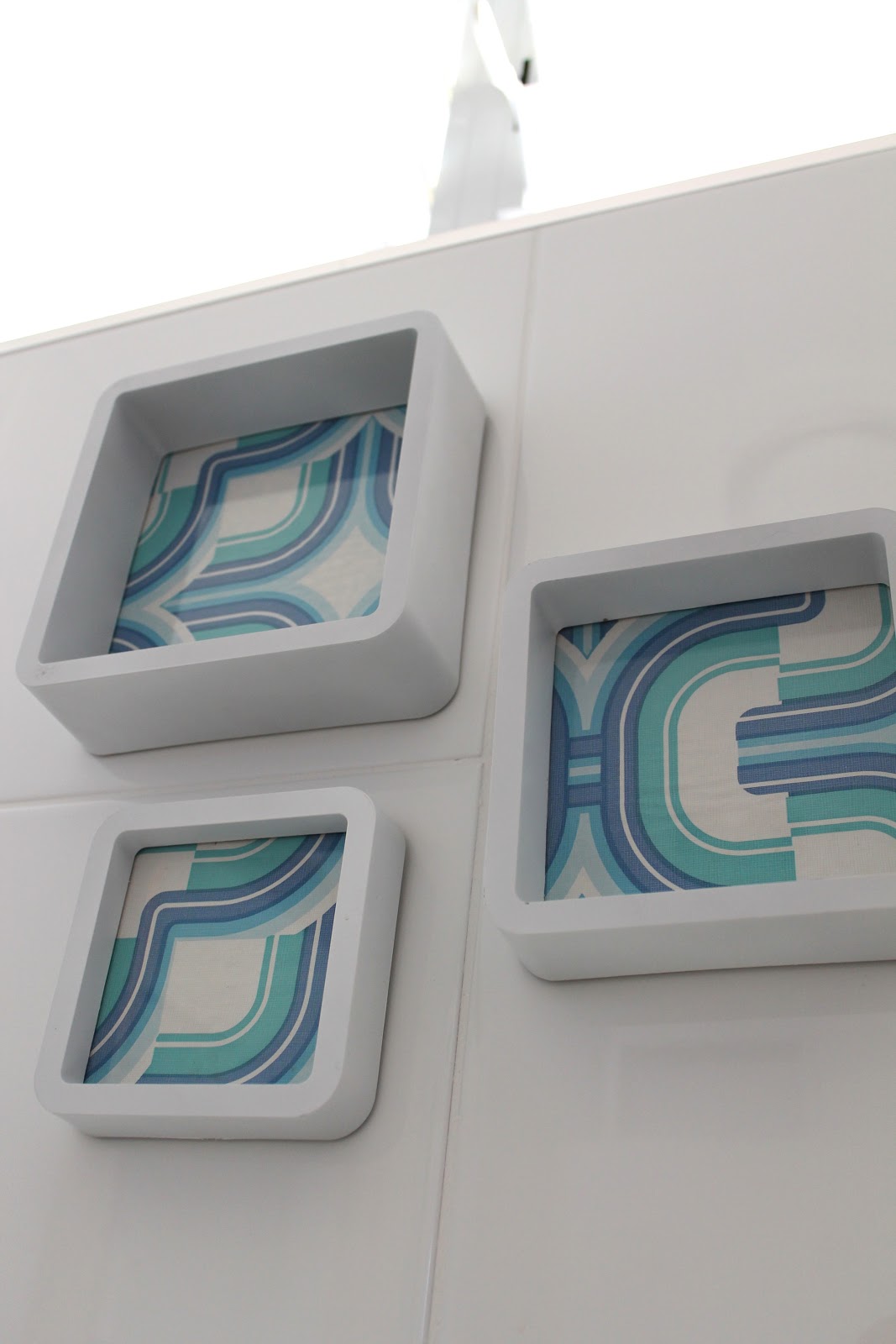 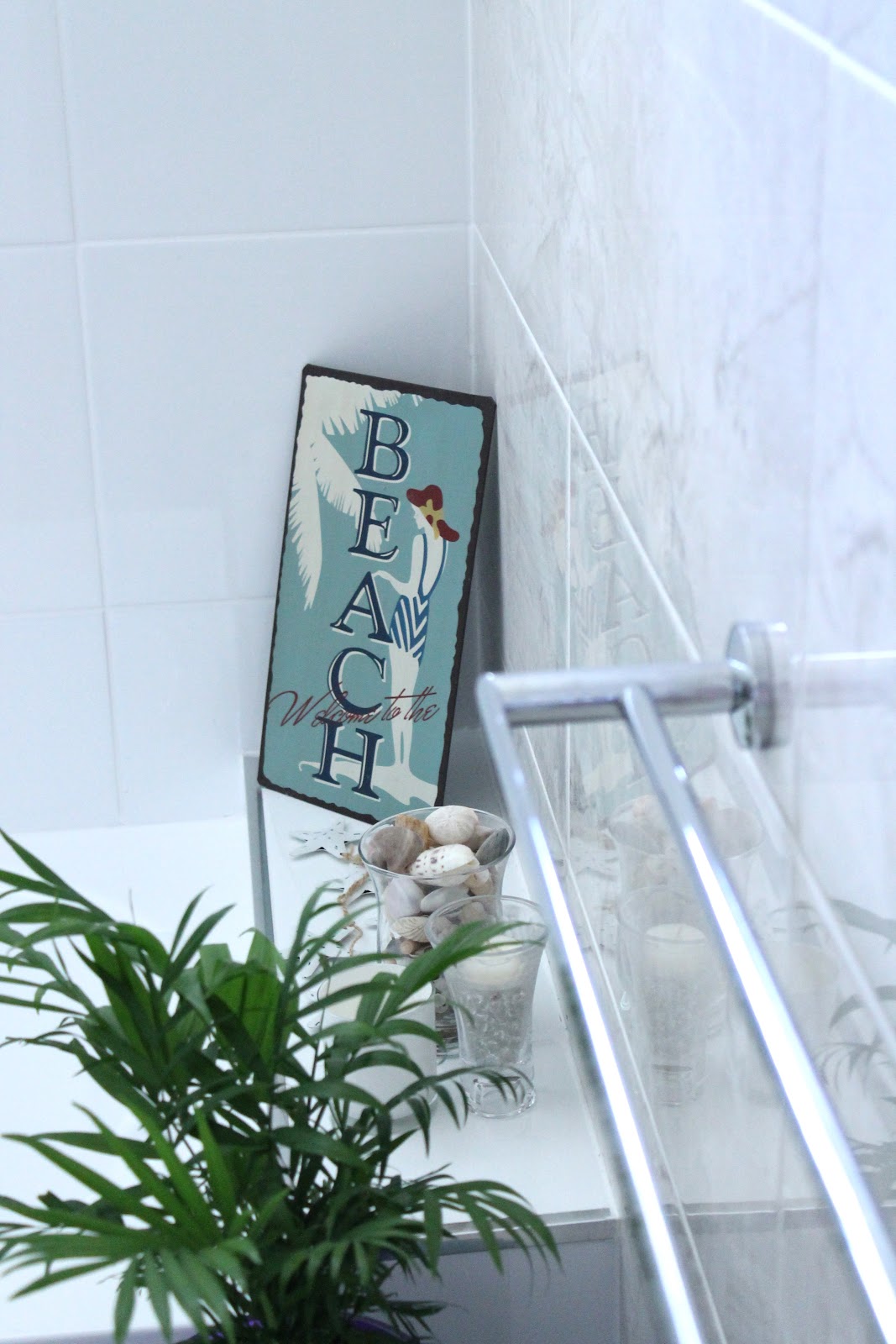 Do you recall the above wallpaper from behind the original mirror? Well as you know I love to capture a bit of history, so I saved it and used it in these little white frames for a bit of art and history all in one.  The 'welcome to the beach' sign adds in a nice bit of coastal fun and connects with the blues from the 70's wallpaper. 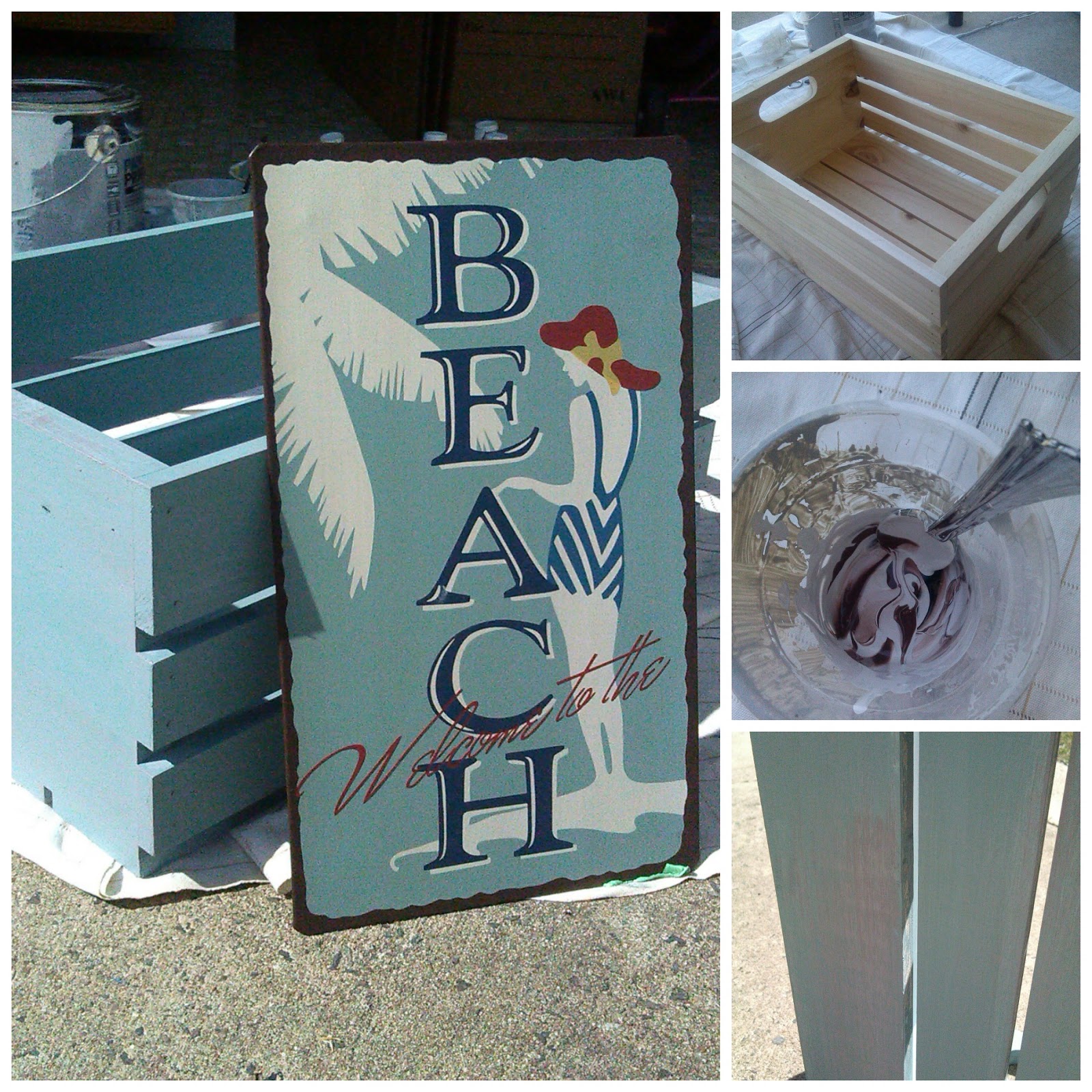 I also bought a crate and mixed my own paints to match up with the beach sign to tie in the colours more and also to add some cute storage to the room.  Ignore the purple plant pot, it's a throwback from our last house, we desperately need to change it! 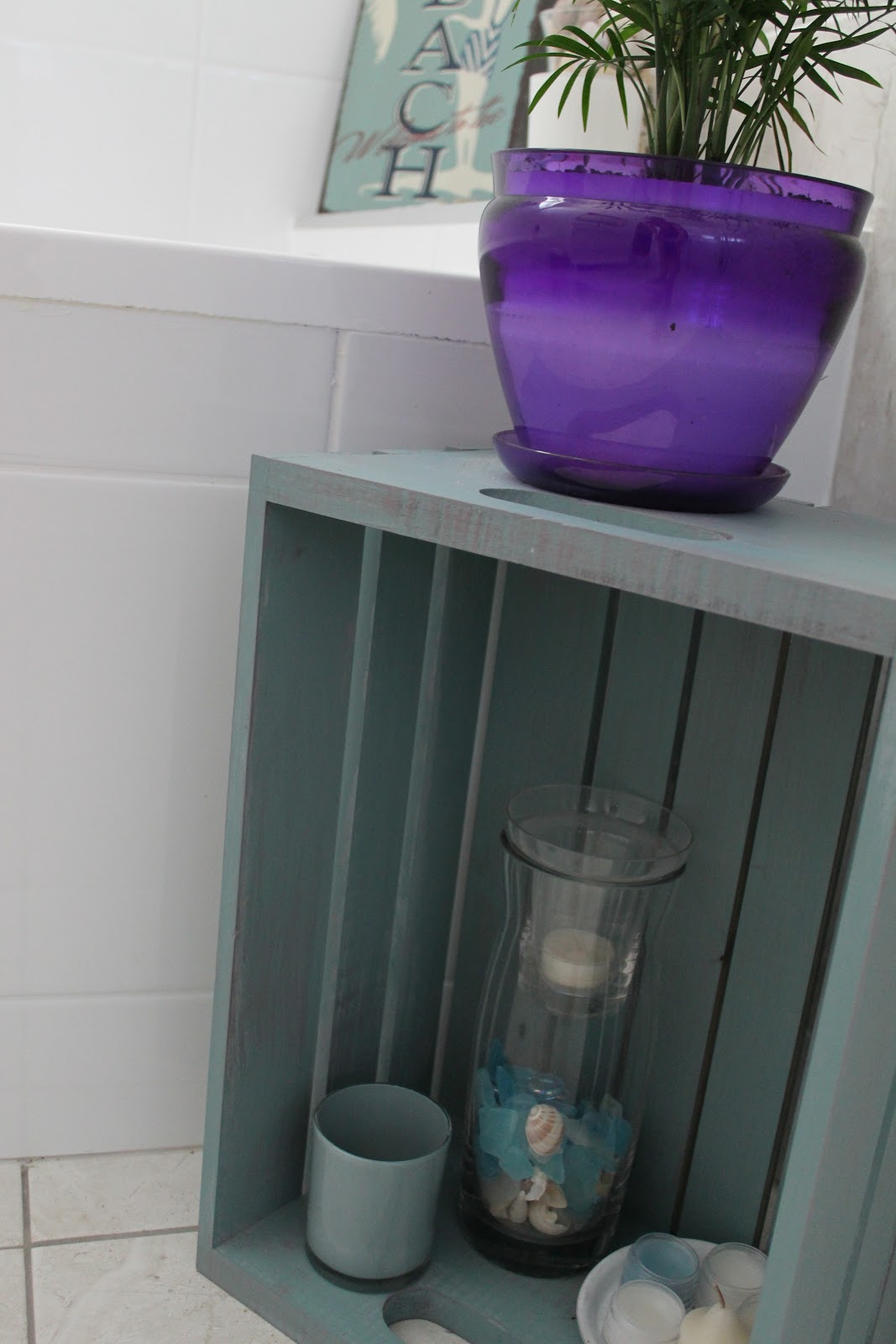 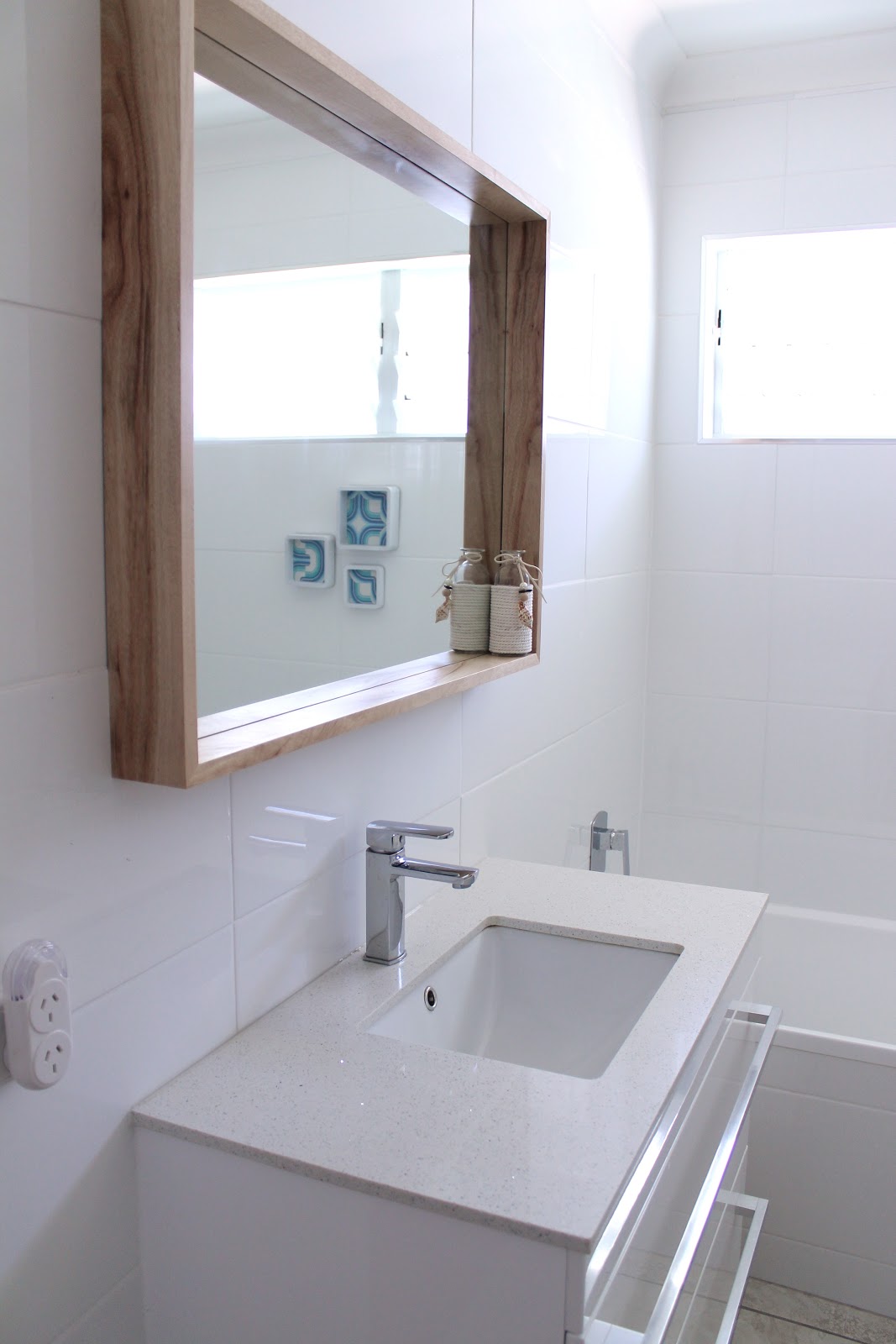 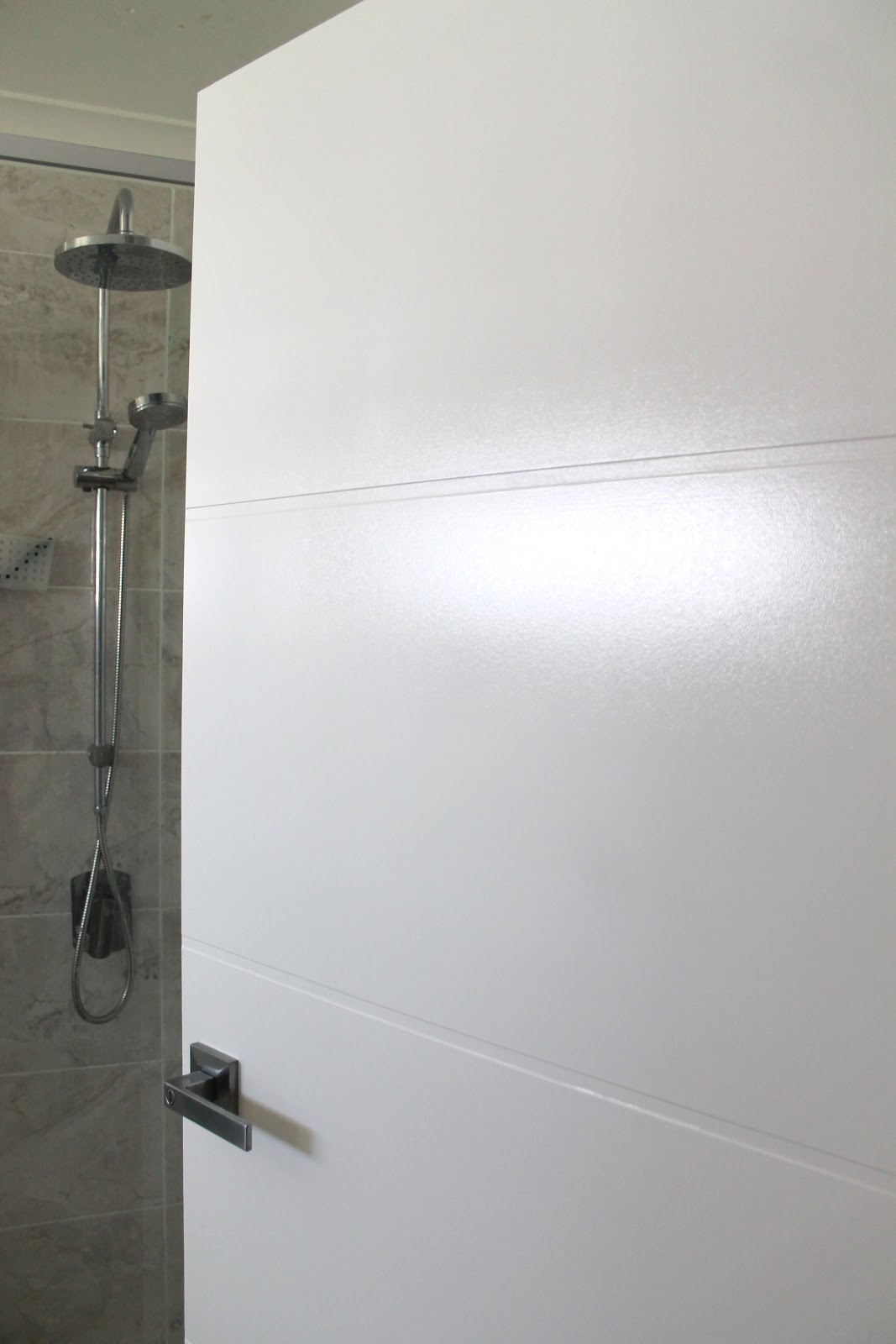 We replaced the windows and doors too, you can't see the windows very clearly here due to the light but we took out the existing sliders and put in glass louvers and eventually we will change the honeycomb security screen for stainless steel screens.  It wasn't in our budget right now (steel screens are approximately the same cost of your windows again, i.e if your window replacement is $600, to fit the screen will double it) but we wanted it to be secure so had these ones fitted and will re-fit with see thru screens when all our other reno stuff is completed.  As for doors, all I can say is as much as I moaned about the painting of them I am so glad I chose them, I love them!  *Hot tip...shop around when it comes to door-buying.  These doors are precisely double the price I paid for them at another door store in our area!
And that's a wrap!  Gosh that took forever, thanks for sticking around guys!
Kxx
Posted by Kate and Col at 19:55