...and no, I wasn't sent to the hardware store to ask for a 'long weight'

Woah, this blogging of the bathroom is being strung out almost as long as the bathroom reno itself...it's ridiculous!  It's been so long I expect you have no recollection of where we left off, I don't even remember and I write this stuff!  So lets re-cap.  Last time we had just finished the wiring and despite it looking like there was a problem, it luckily ended up being fine and our sparky's work came in on time and on budget.  Whoohay!  However I finished off the last post with this sentence,

... Little did we know, the plumber was coming the next day and his story would be totally different...

I was a little surprised I didn't get a few comments on this.  I had put that line in to see if it would stir a few..'but you said..' questions.  But you were all very good and didn't question me at all.  (Or maybe no one is reading and I am talking to myself constantly...hmmm!)  Anyway..so what do I mean??  Well in the first bathroom reno post you may or may not recall I wrote this,

...the reality was the shower was a wreck,..... it was literally rotten through and leaking terribly.....We knew this the first time we looked at the house months before we ended up buying it (and we got our plumber out to take a look before we signed contracts to be sure there were no more ugly surprises after the fact) so we adjusted our budgets and costs to accommodate for a complete refit of the bathroom and separate toilet to be completed prior to us moving in...

I have highlighted the important part of this sentence.  As Col always likes to point out due diligence is a worthwhile and necessary part of all good planning.  If you know what's coming, things are much easier to manage and control.  So if we got the plumber out months prior and therefore knew what to expect why was the plumbers story totally different?

Well first I'll tell you all the good stuff.  The stuff he could see and 'predict' going wrong and/or potentially taking more time.  We did indeed have our fabulous plumber Ray out to take a look at the bathroom situation before purchase and it was a great idea.  He not only looked over the bathroom but the hot water system, the laundry, the roof and the general plumbing.  On his bathroom and laundry inspection he explained that back in the day, they used to put all the pipes underneath the slab.  Yep that's right, all the water pipes run under a massive slab of concrete, which is then not only built over but tiled over too, in our case numerous times! 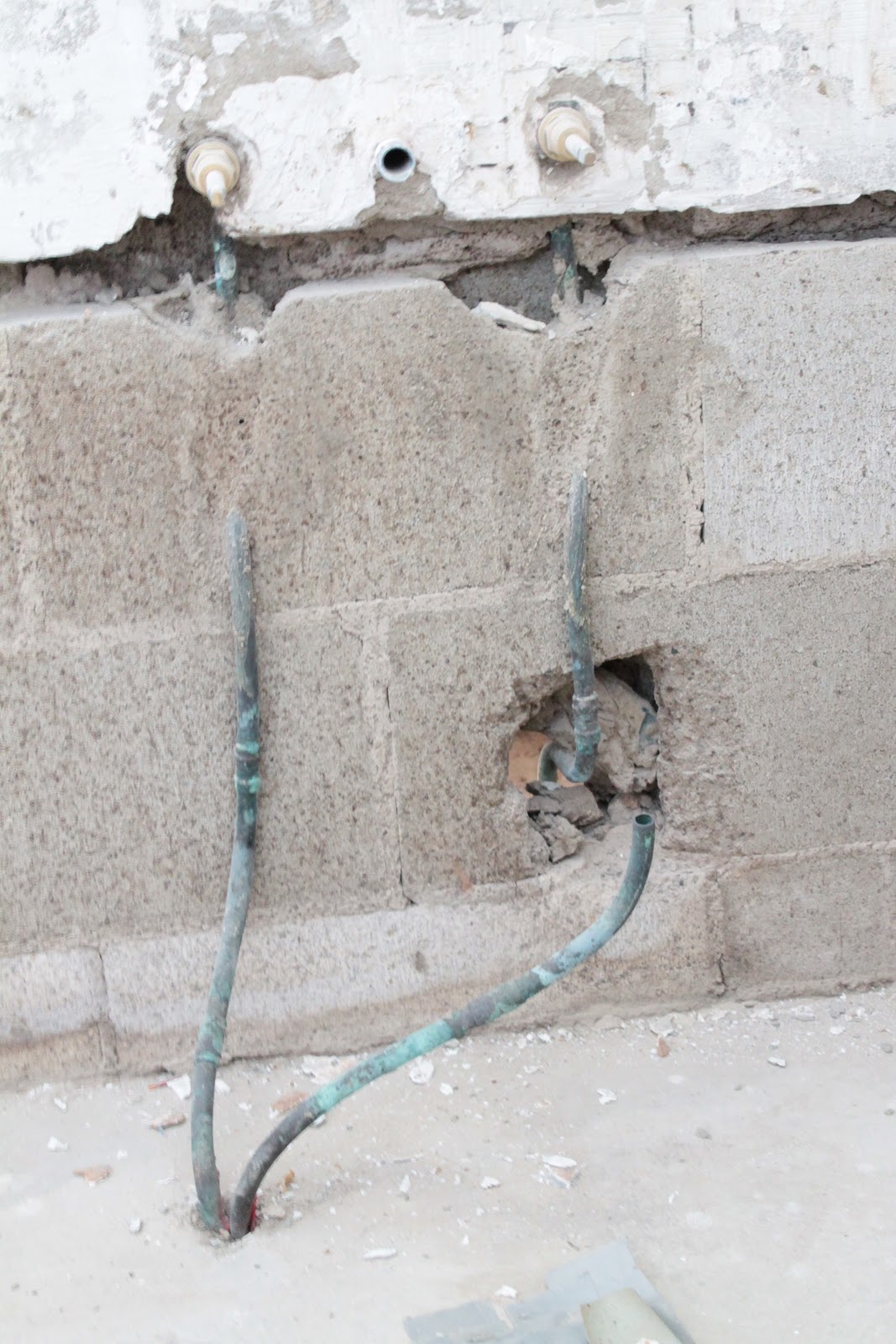 ﻿Not if, but when the pipes go wrong there is exactly zero chance of getting to them without ripping up half your house.  So in order to rectify the issue, the old damaged pipe gets shut off and then the new pipe has to be re-routed elsewhere i.e brought through the wall instead, that way if anything bad happens you only have to go through tiles/plasterboard etc to fix it.  It's stuff like this that we would have had no idea about and that made his visit so worthwhile.  On further inspection, (like he had just pointed to an example diagram in a plumbers textbook), he saw this... 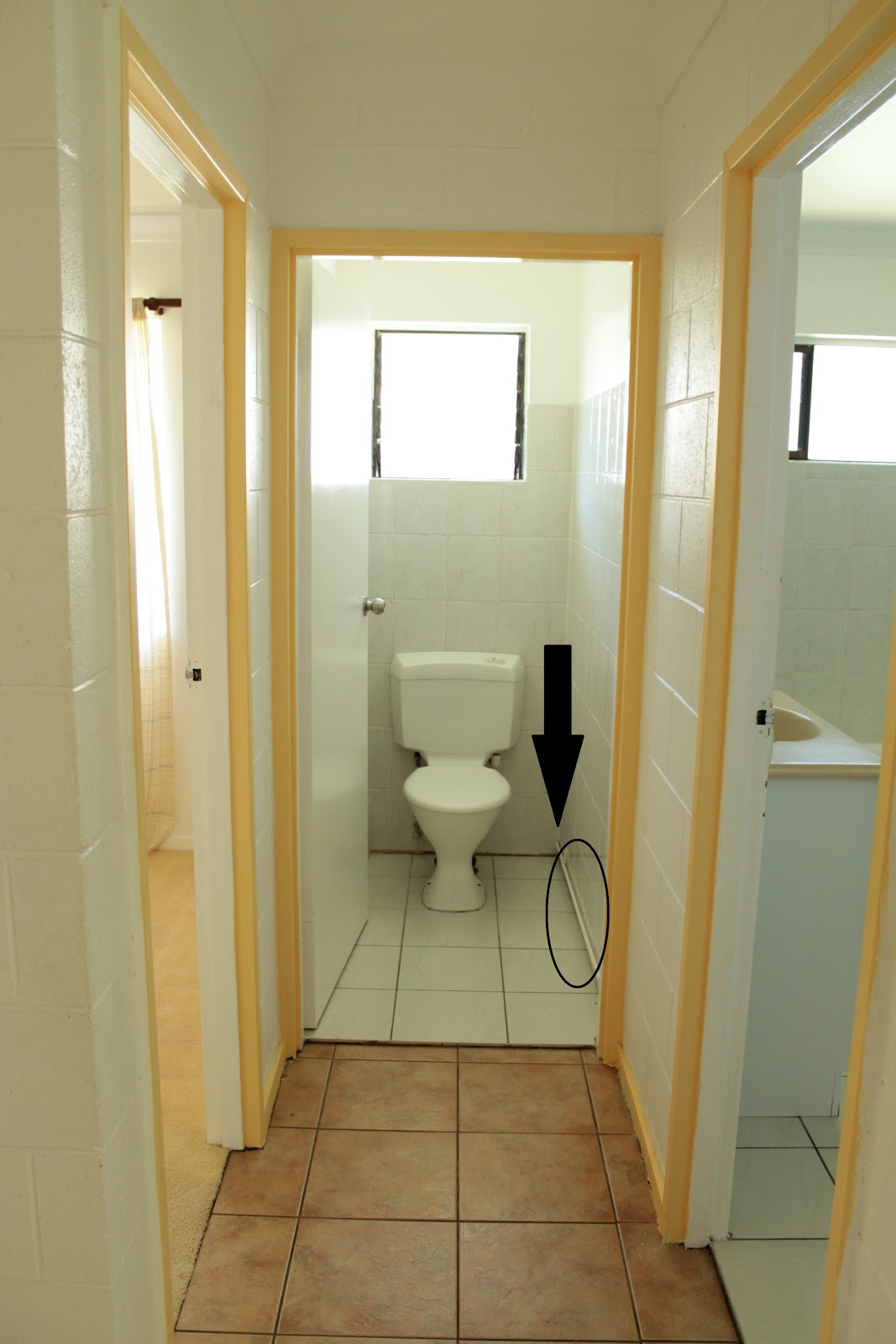 Our old toilet with a water pipe attached to the wall going through the adjoining room to service the bath and sink next door.  Hmmmm - a solution it is...a good one (or a good look) it is not! 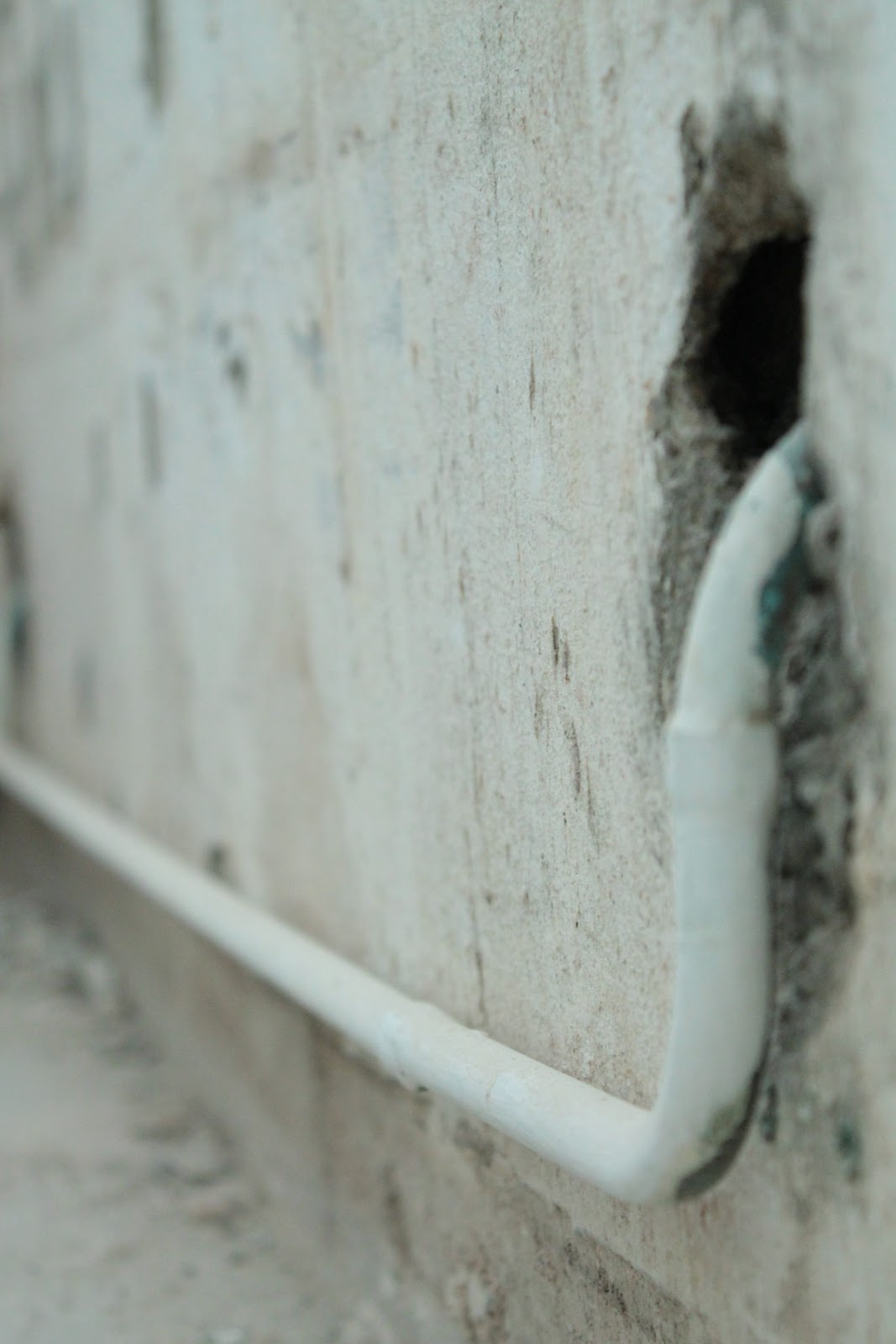 The old cold pipe mark II during the demo

It is more than likely that one of the owners prior to us had recently completed works on their own bathroom reno.  Taking it from its original black tiled floor and blue mosaic walls to the white 'everything' that we had inherited.  As we know they tiled straight over the top and' ta-da' they had a brand new shiny bathroom.  Until maybe only a short time after, when their cold water pipes broke!  The only way to fix this dire situation is to either rip up all the wall tiles and re-route the broken pipe inside the wall to hide it all as is common practice....OR by tacking a new pipe onto the wall externally for all to see and being done with it.  They obviously chose the latter, possibly for ease, possibly for monetary reasons, probably both.  Either way it was not ideal long term.  So at this point we already knew that we would be re-routing all our pipes, whether they were good or bad, right here, right now.  It was a no brainer...while we have the room back to a concrete shell we shall cut off all the pipes and re-route them all now in one fell swoop to stop any future problems happening, or at least make them easier to fix if and when they do go wrong.  So that was our plan, sounds so easy! 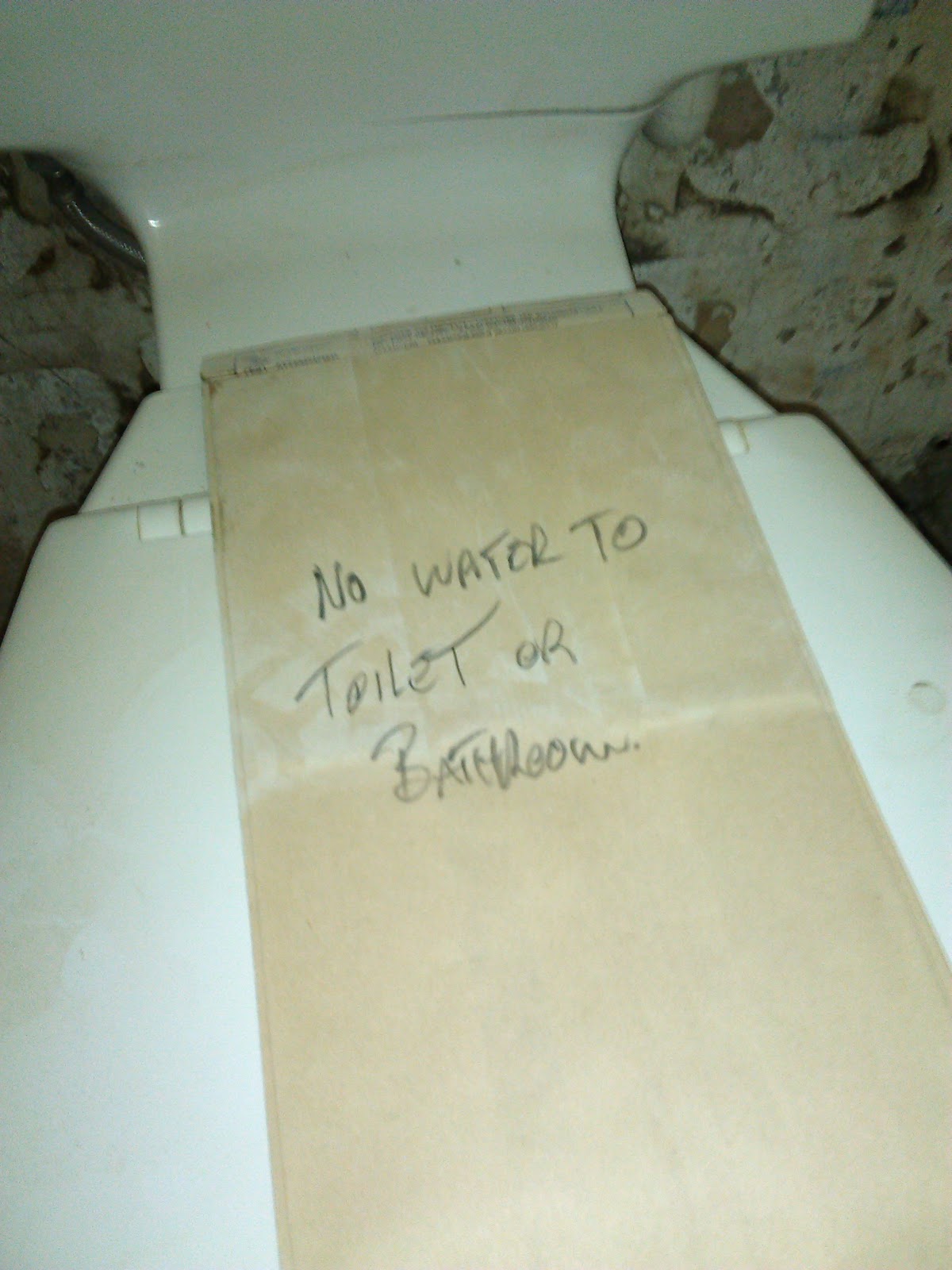 Enter - the plumber on his first day....

After cutting off the water supply and taking out the original hardware and pipes he began his thankless job of cutting in the wall to create channels for the new pipes to sit.  And attacking the concrete slab to move the waste pipes over a bit to accommodate our new vanity and adjust the shower and bath drain slightly. 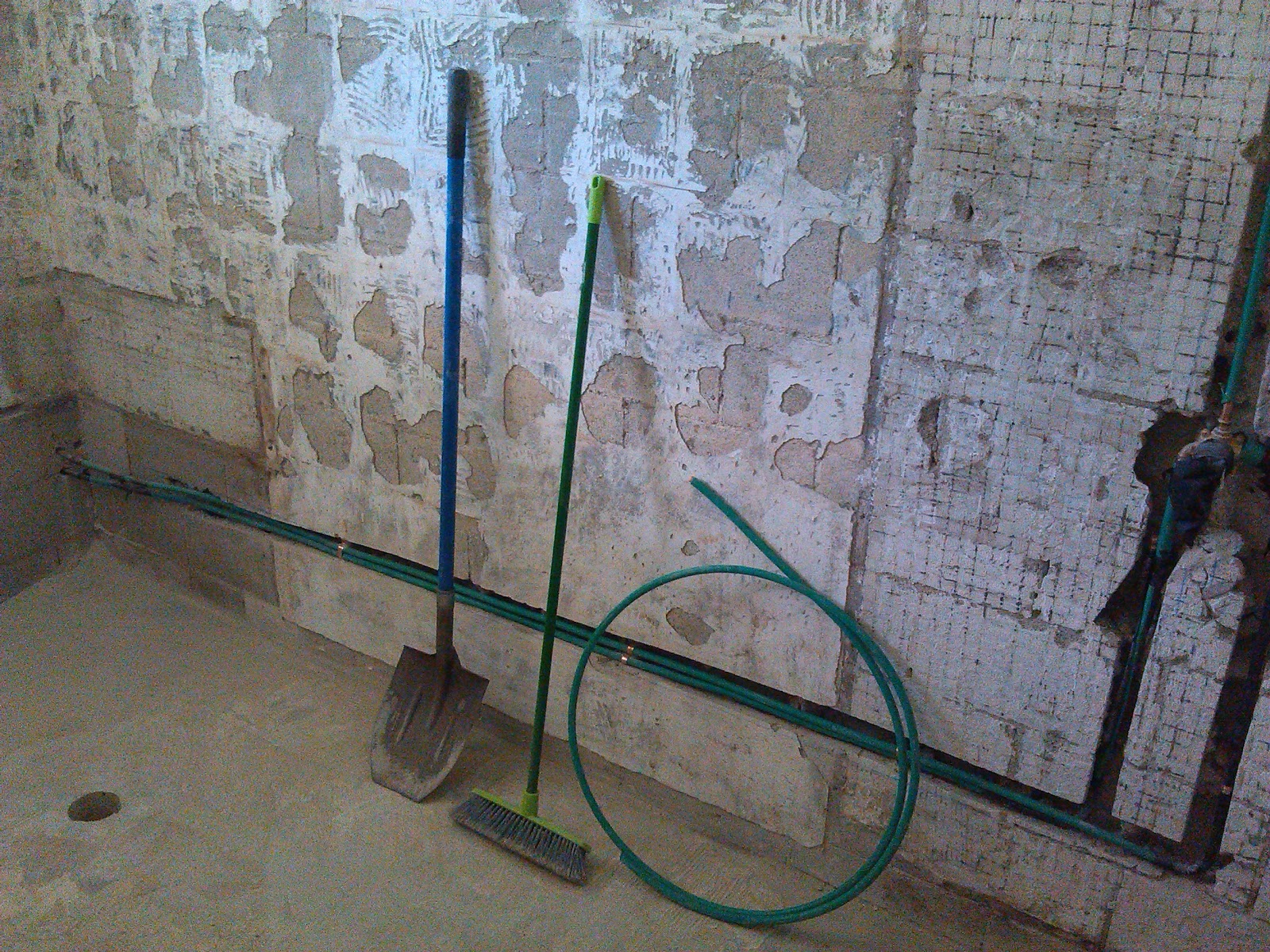 As we knew this would create a lot of dust ('cha - understatement of the year) I had to have a few days off painting - shame!  So I wasn't spending as much time at the house hence fewer photographs. Anyhow one particular morning a few days into the job I turned up and he said...Kate this is taking so much longer, your concrete is so hard!  To which I naturally laughed and thought yeah, yeah, wait for the tradie pun.  But he didn't laugh with me and he didn't follow up with any joke or punch line, he just continued to talk about hard concrete.  It took a few minutes of me staring at him to realise, this was no tradie joke, he was for real!!  Astonished I said, 'Oh my gosh you are actually being serious aren't you...but forgive me my ignorance...it's concrete, of course it's hard...isn't all concrete hard??!' (dullard alert).  It turns out all concrete is not the same.  Who knew??!  Of course it mostly looks the same (as far as I know)  but both the time it's been cured for originally (kept moist after laying) and original content both change it's overall hardness! (please - no smut!).  The longer it cures the harder it gets and this stuff was not going anywhere in a hurry.  He followed up with ' great news for you (the house isn't going anywhere) bad news for me cos I have to cut into this stuff somehow"!  So with extra time needed to crack down through the floor to move waste pipes, and the hire of a saw with a bag to collect the ridiculous amount of dust the equally solid walls produced (the 'bagged saw thingy' didn't work well, next time we shall save our money and deal with the dust)  the job dragged on a bit longer than expected, thus taking our plumbing budget up a notch...not much  but another example of no matter how much planning you do something's simply are unforeseeable. 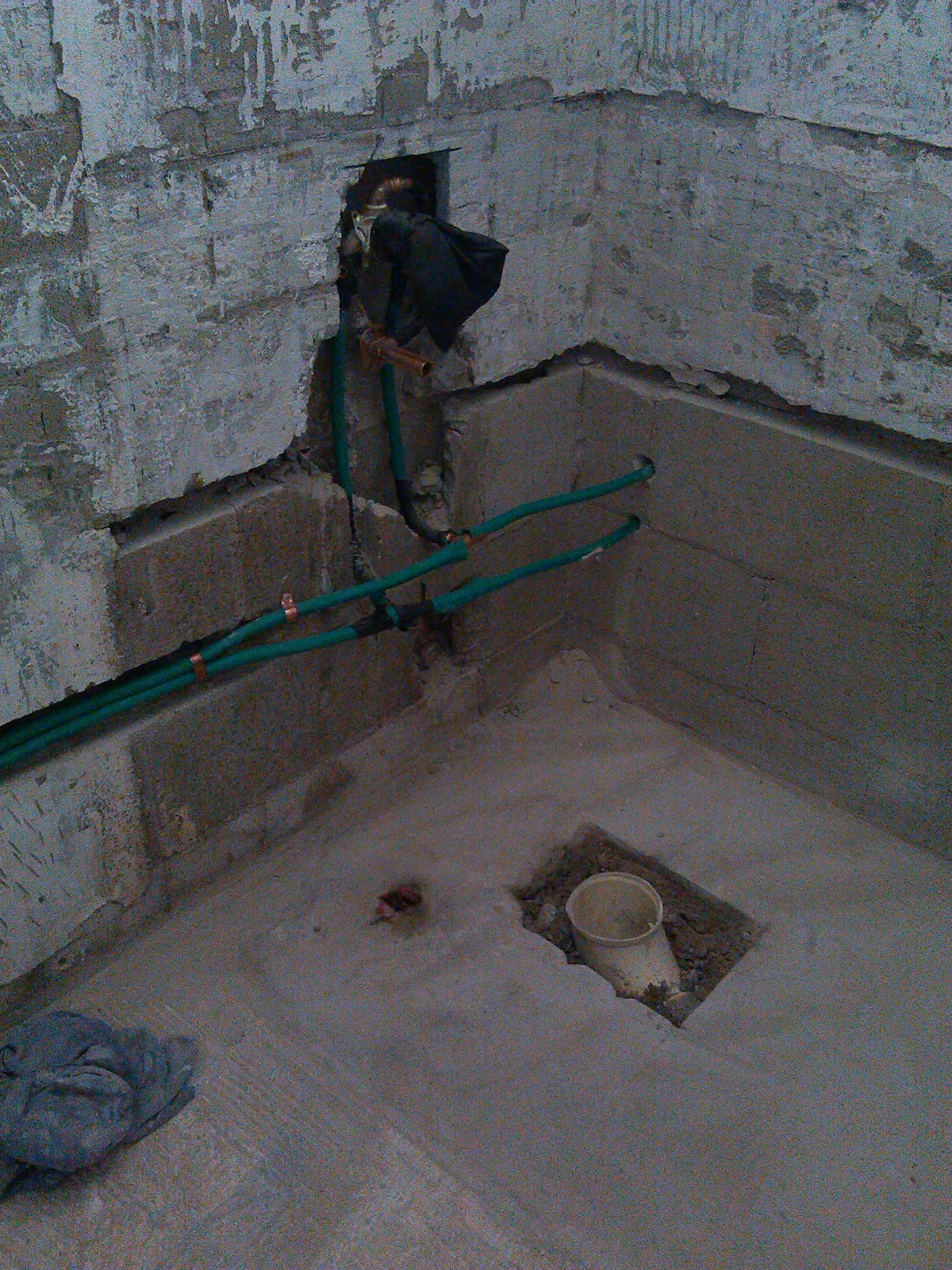 Still, when all was said and done the floor was cut into, the drains were moved and the pipes were re-routed.  We did this not only for the bathroom, but for the laundry and kitchen too.  So that when it comes time to renovate these rooms (cannot come soon enough) all the pipe work is done and ready for its new shiny fit out! 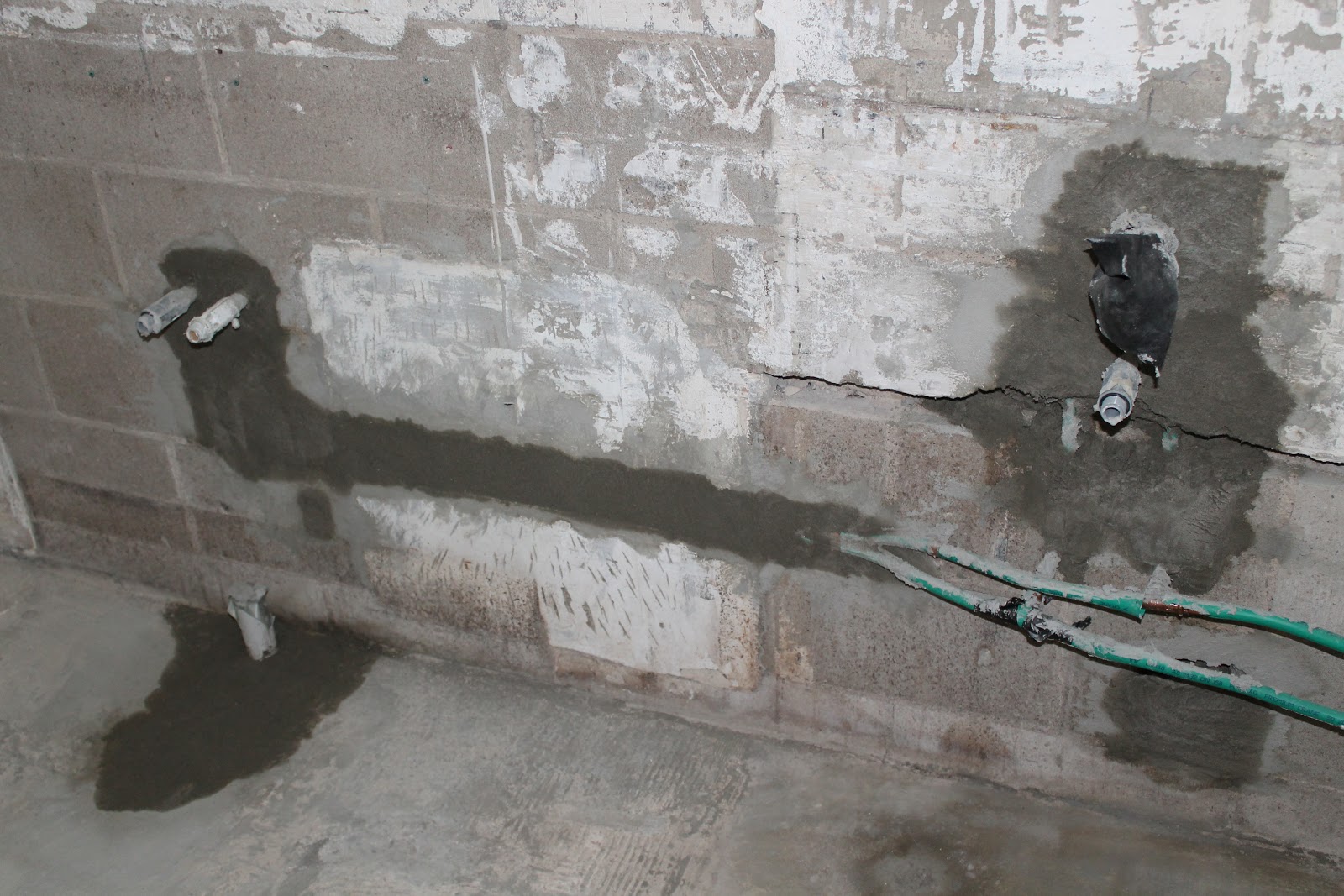 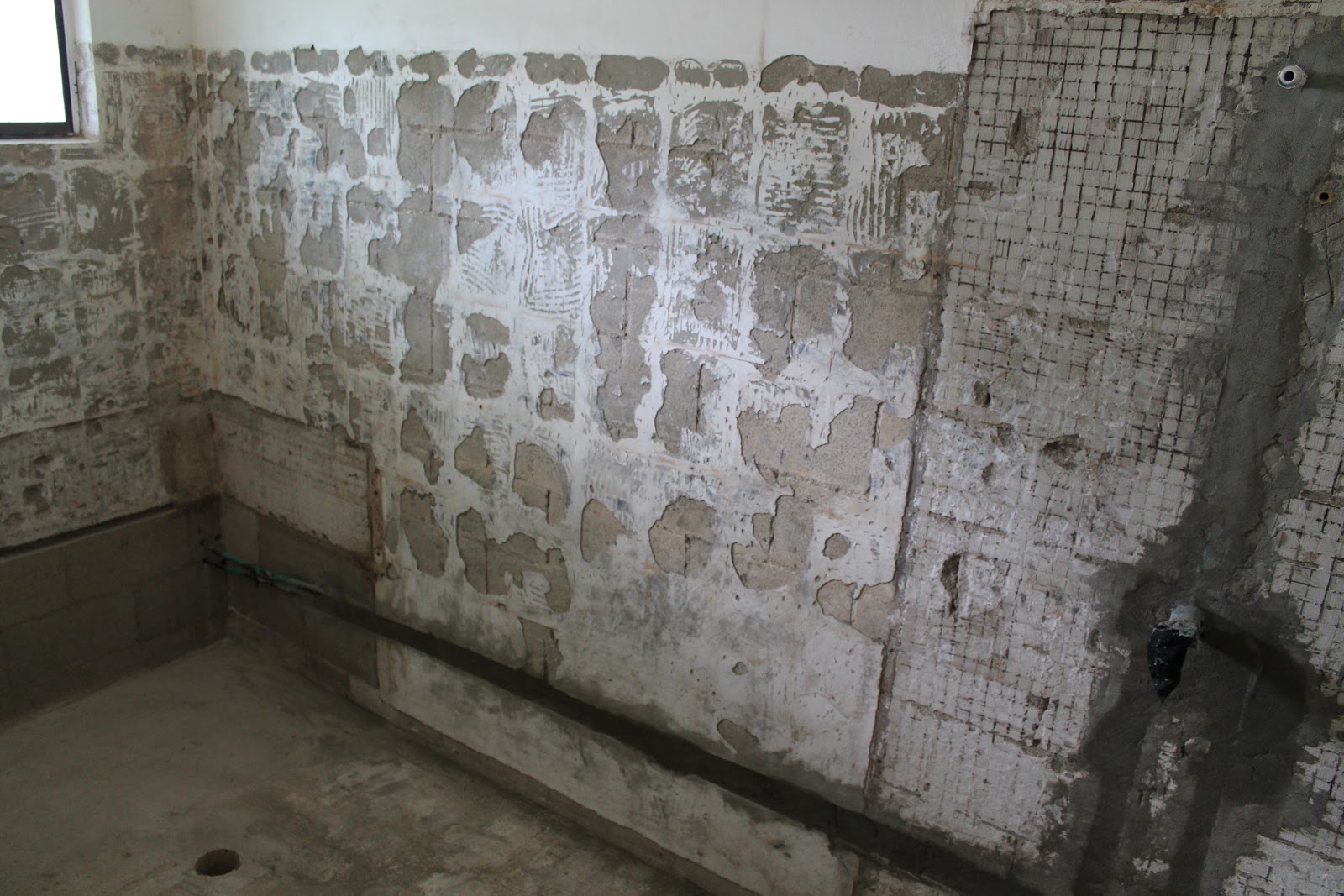 Once the pipes were all in, it was concreted back over to make it all tidy again

When the concrete had set and the waterproofing had been done it was time for the fit out...yeeehaa, we are on the home stretch now!  No photos of the waterproofing and start of tiling as our super tag-team wet sealer and tiler used to come so early in the morning a lot of work was done prior to us arriving.  (And yes we did mange to get more of that tile mortar off the walls, I admit it wasn't all off but smooth enough to make for an 'ok' base to be re-laying tiles over).
Finally we were getting close to having a useable bathroom again.  This was super exciting for us, as it not only marked the near completion of our first room renovation here, but also once the bathroom and toilet were fully in, it meant we could move in!  Haazaaaa!
Kx
Ps - as this is turning into a complete saga to blog about, I will leave you with a sneak peak of our newly completed bathroom.... 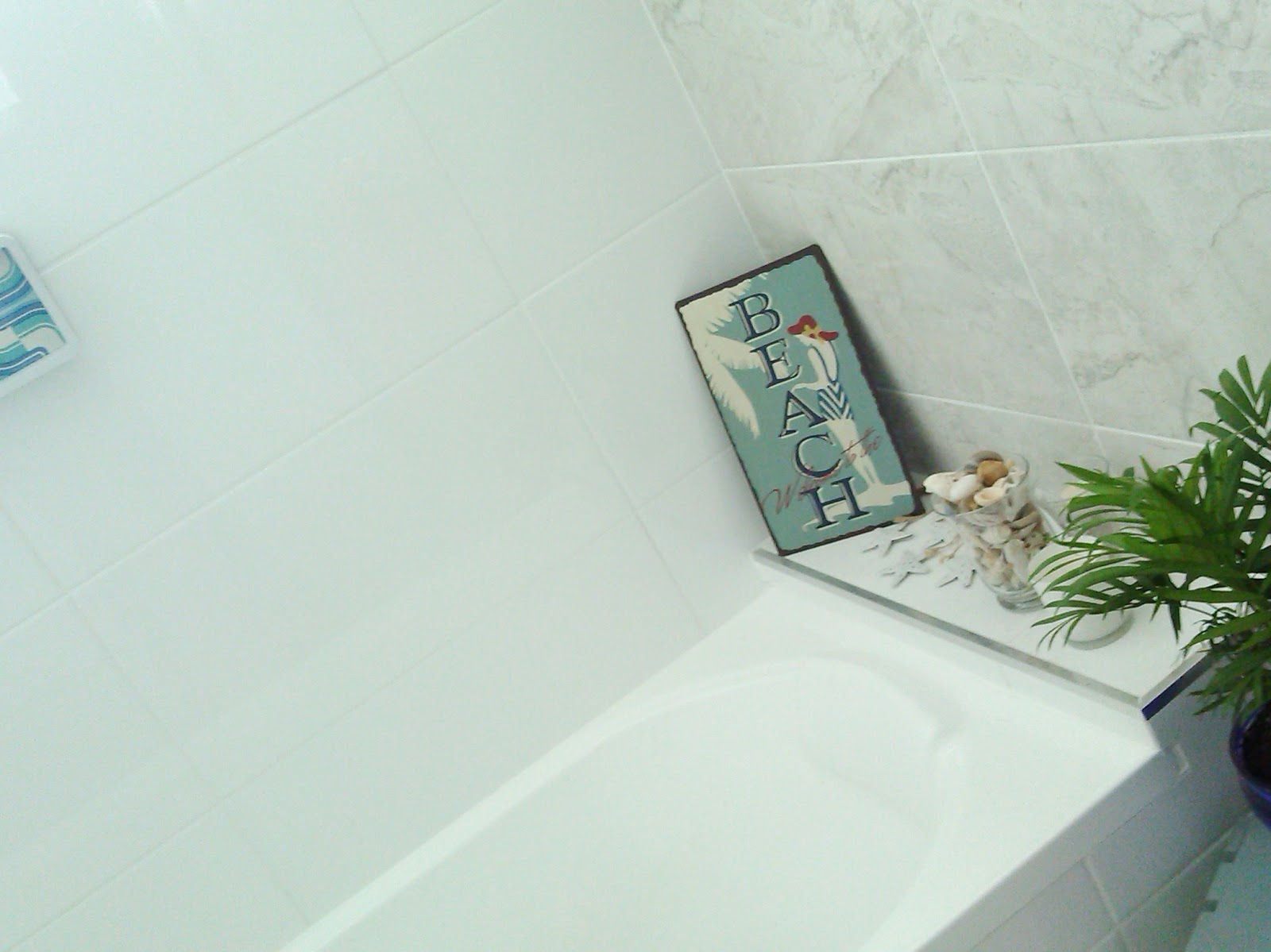