...to uncover the history of your home.

We all know that as part of buying a house, one of the many purchase actions buyers undertake is to perform a search through council records on their potential home to be. This is primarily done to confirm the basic facts like allotment size and boundaries,  flood zone history, and building approvals for any subsequent works (eg: in Queensland the raising of a house and/or building in underneath). In essence it's all part of doing due diligence so there are no ugly or potentially annoying surprises once the contract goes unconditional.

Often once these first basic searches are done prior to settlement, many buyers forget all about them and may never need to access council records again.  However depending on what you are doing, or plan to do to your property you may need to access them and get further information down the track. Another reason for doing subsequent council searches, such as in our case, is to learn more about the history of our house. There had been conflicting ideas between us, different neighbours and tradies as to when we all thought the property had been built.  We were under the impression it had been early to mid 80's then we were all completely thrown when this 70's style wallpaper was unveiled during the bathroom reno... 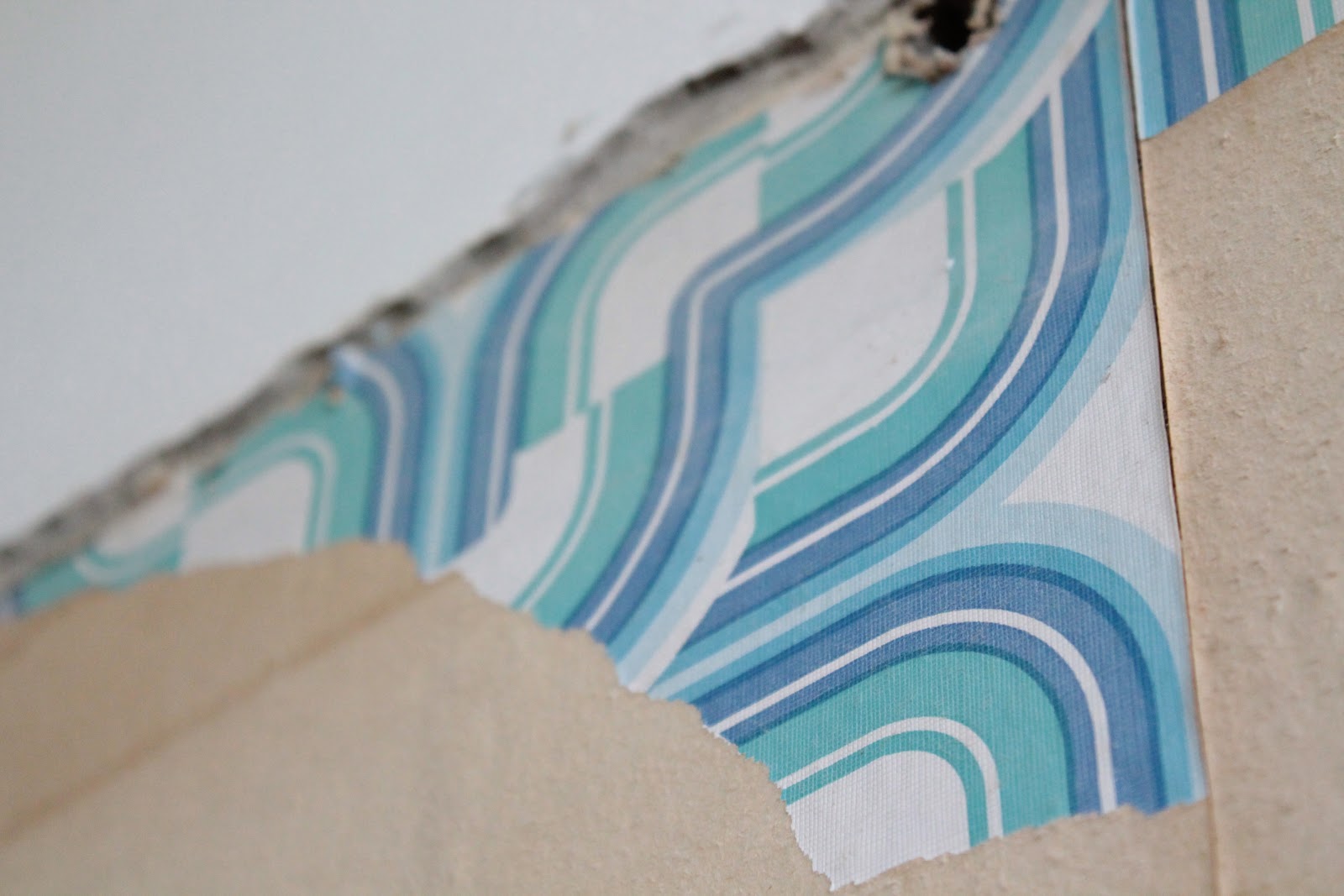 So we were intrigued to find out more.  I have always been interested in building design and plans and was curious to see if there was an actual copy of the original building plans on file and to see if the floor plan, dimensions and layout we have now were the same as had originally been designed.  I also wanted to double check that the existing 'add ons' (pool, covered entertaining area, etc.) had all been council approved when they were built.
You might remember I drew this rough floor layout and dimensions after we had unconditional access to the property and wrote about it here... 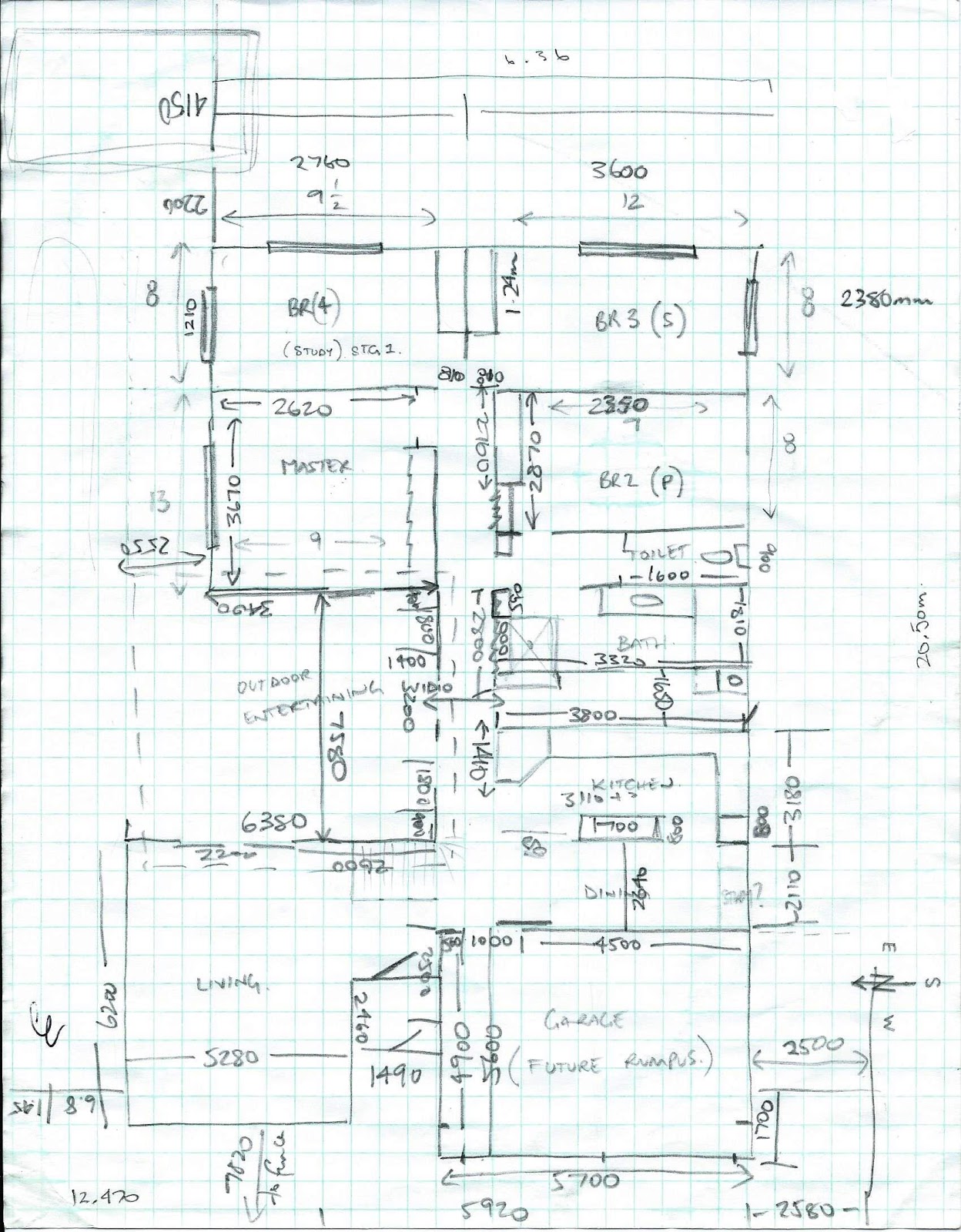 Despite my 'fantabulous' draftsman skills above, Kate was convinced there might be a better formal drawing elsewhere, so after some discussions with our builder Darren and getting his thoughts on the history and design of the house, Kate submitted a search request to the Townsville City Council. She had looked into this before and was ready to pay out upwards of $130 to get the searches printed and sent out to us.  But when it came to actually getting the files she found out a much better way of accessing them.  Here in Townsville you can apply to access the records of any building, and either pay a large fee and have the council team access, print and mail you out all the documentation.  This means getting a potentially huge wad of paper of which some may be duplicated or just not needed.  OR you can apply as normal to access the searches but click on the 'view files' option.  This allows council to search for, and get your files ready for you,  then you get a two week window to go in to the council chambers to view the documents and chose which pages you would like to print out.  This way it saves an awful lot of wasted paper (and ink) and saves the council members time, plus best of all you only pay for what you print out.  In our case we printed out every page that was relevant to our needs, it ended up costing us about $20.  It's a great initiative to improve efficiency and reduce waste. 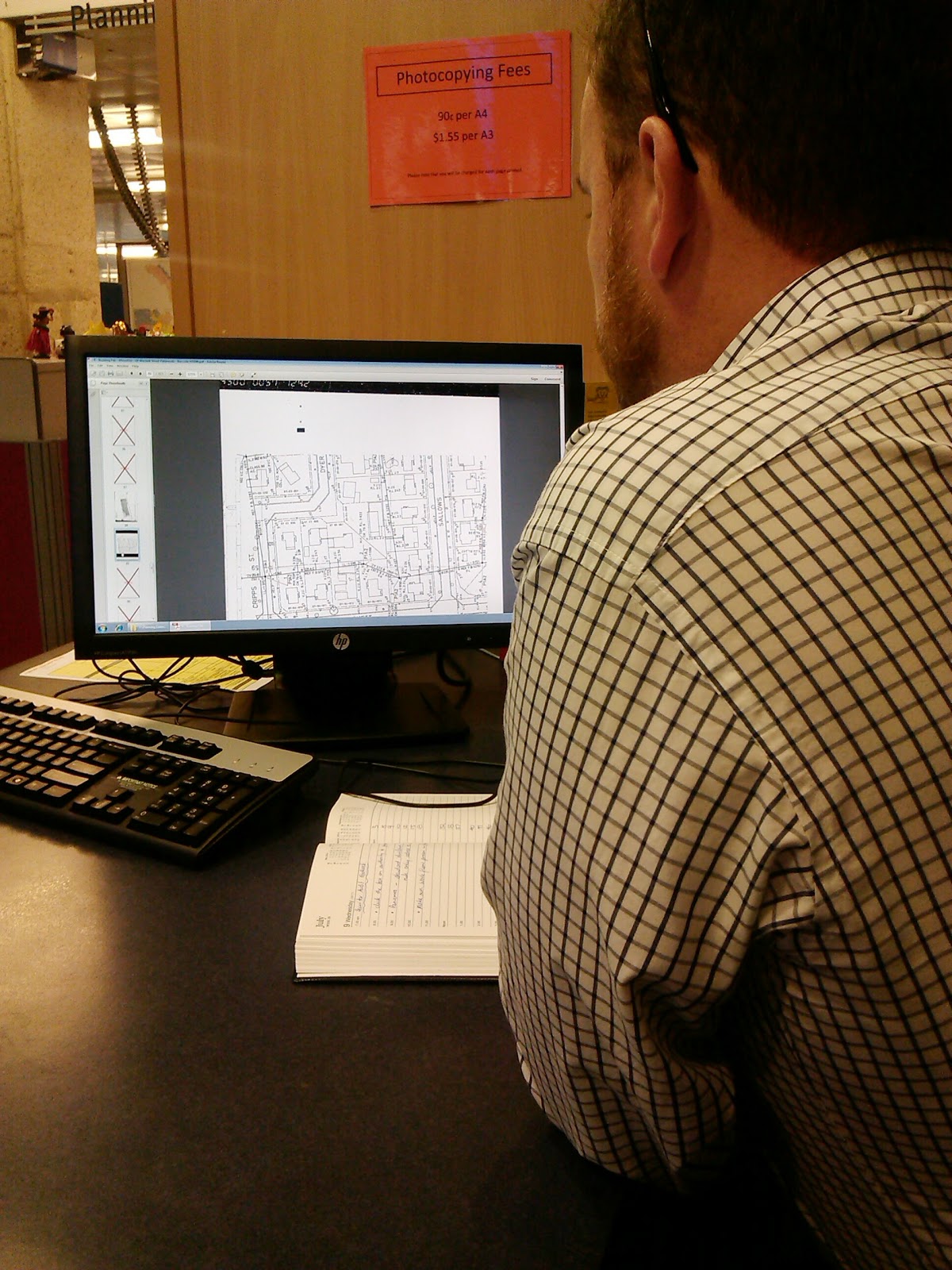 Once the files were ready (approx. 10 days after submitting the request) Kate and I went together to look through the original microfiche copies on file (now digitally recorded), we were pleasantly surprised at what we found...

Even though the file had our address on it, my first thought was, "hang on - that's not our house!??..." For a moment I wondered if this search had gone terribly wrong.. 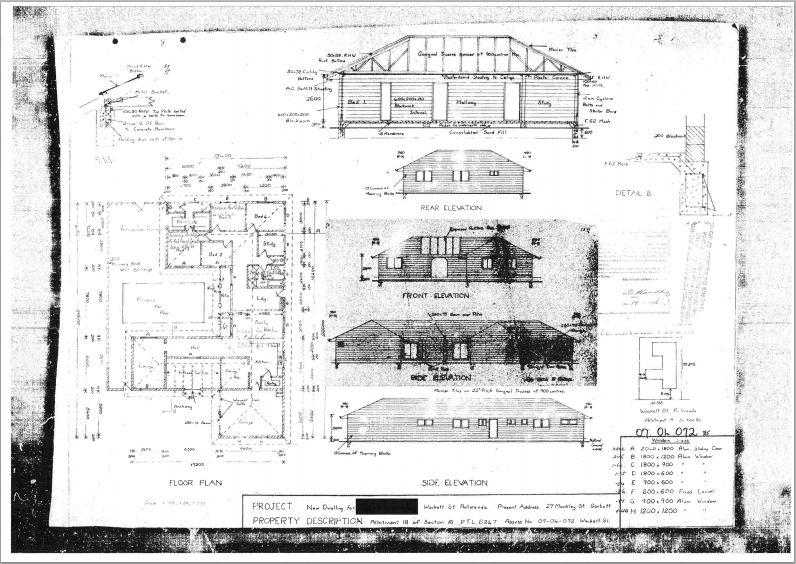 Then as I scrolled through I thought, "...but that is our house", quickly realising there were actually two house designs originally submitted... 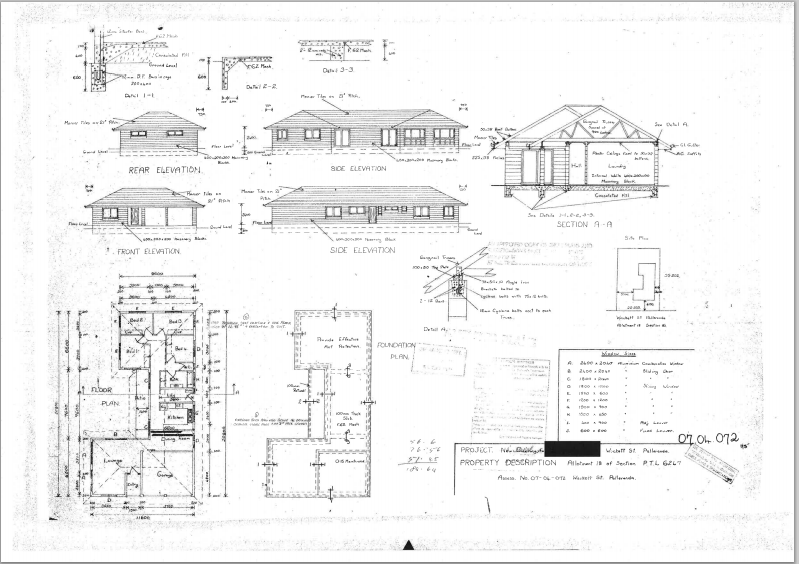 As it turns out, we think the first plan is the original plan which was rejected, and/or disregarded for two possible reasons. First, it was such a big house which took up the majority of the block, meaning there would not be much room for a decent garden space.  It also wasn't as functional a layout as the other house plan which has a much more open plan living style to it, which has become the preferred Australian design many decades later. Second, the first house plan extends the footprint of the house out towards the rear boundary by 600mm. Now that doesn't sound like a lot, (in fact if it had been possible it would have been great given that the two back bedrooms are just that tiny bit too narrow) but as we found out when arranging quotes to build a shed at the rear of the house, that extra 600mm extends the (first designs) footings into the 'zone of influence' for the sewer pipes (which we wrote about here). This, as we've come to realize,  means sinking deep piers and footings to adhere with council regulations, adding a not insignificant cost to the original build; hence why we think the second plan was chosen as the final build design. 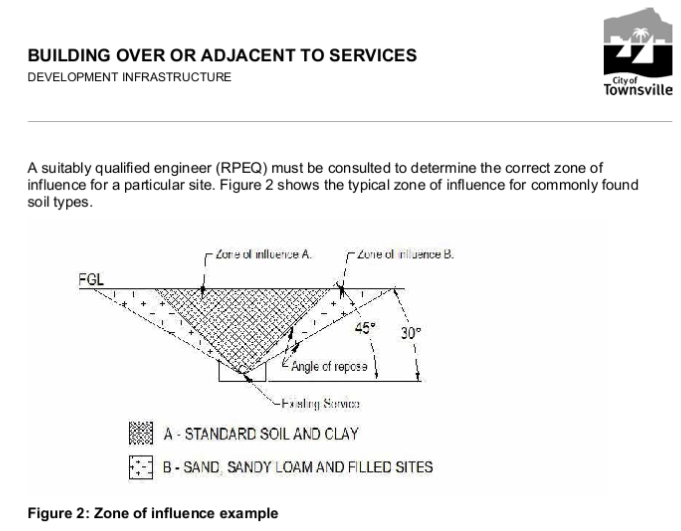 We found out that despite some tradies coming to the conclusion that our 'add on's' were probably not council approved, we were pleasantly surprised to find every additional structure on the property is above board.  Yayy for that!  We also found out a bit of history surrounding the house which we'll write about another time, including the fact that although the design approval process started around 1972 the final build inspection was in 1976 (coincidentally that's the year Kate was born - happy late birthday baby - I got you a 'birth year' house ;-) Happy Days!


P.S. We also found out that we've got a 'Champion Pool' - awesome! 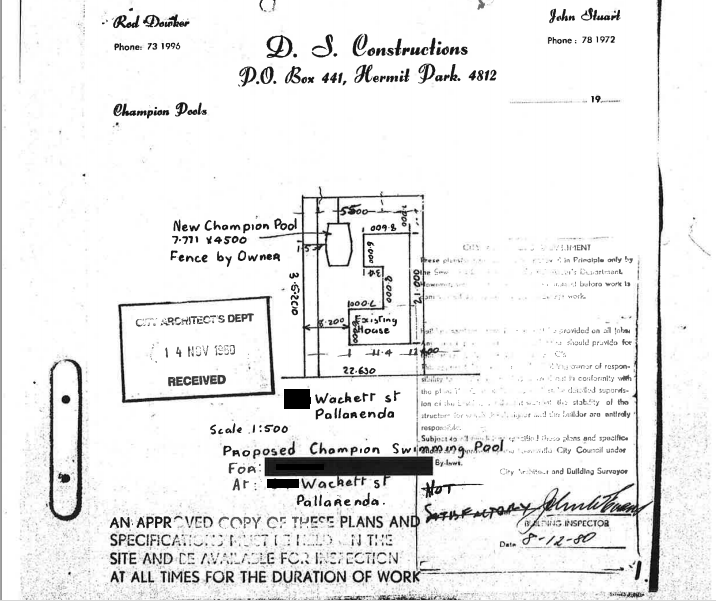