..oopsie - my bad!
Look who forgot about this blog for nearly a week.  I have been soooo busy you would not believe.  We have so many things on the go at the moment that I have just installed an app for reminders on my phone after today realising at 10.35am (after taking a lovely little walk with my trusty side kick Red Dog), that I was supposed to have been at a parent info day for prep at Poppy's new school from 9-10.30...OOPS again!  Luckily they allowed me to go in for the 2pm time slot!  My brain is fried, so I am now relying on technology to keep my appointments up to date, let's hope it works!
So in lieu of the Monday Slideshow and the carport post that I promised last week, I am instead combining the two (where have I written that before?...oh yeah, here, gee I am shite).
It actually makes sense to do that anyway as it will be a fairly succinct carport post...so it'll kind of be a slideshow anyway.  It was a quick, but intricate re-do, that only really needs a few pictures and the odd paragraph to tell the tale.  *Edit as you will see the above lines are rubbish as once I start I can't keep it short to save myself!﻿ 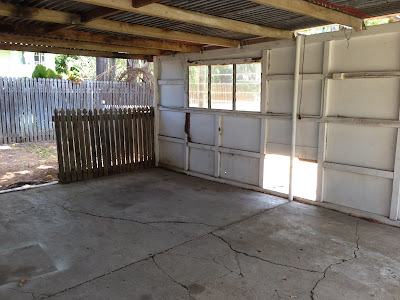 Here's what we started with 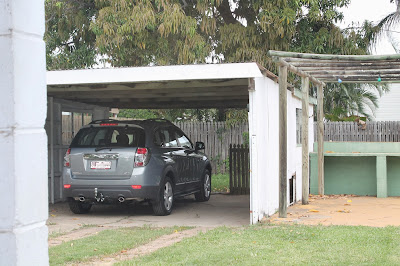 The roof and beams were mostly ok, although there were some areas of iron that had rusted and leaked.  The main side structure and roof beams were made of beautiful (heavy) silky oak, (probably off-cuts from the house frame re-purposed some time in the early 60's) that had seen a little bit of termite damage somewhere in its near 50 year history but the side sheeting, well, that there my friends is asbestos.
The awful 'A' word that makes people shriek with terror and quake at the very thought of being anywhere near it.  I am not going into a full on post about asbestos, (although I have taken a homeowners course on it, I am no expert) but suffice to say if it is in good condition and not in any way broken, damaged or exposed then - leave it well alone.  If it needs to be removed, like this shed, you need to weigh up your choices and do it properly...either by yourself taking all precautions necessary or pay someone else to do it for you.  Every council is different with their rules and it's imperative to understand everything about asbestos and its removal before you decide what to do.
So the bottom line was even though the carport was doing its job...it had seen better days and needed to go.  We chose to keep the steel poles as its base and re-build it from that.  Was that wise?  Well if you go to any carport/shed company they will say no!  They have no idea how deep the poles are in the ground or how long they had been there.  So to cover themselves they will always suggest to remove it all and start again.  We chose not to as we were working to a budget.  We went against their advice and again employed tradies to do the build.  Only after all the roof and sides had been removed and we could test the poles to our best judgement, did we fully decide that the poles were ok.  If either of our tradies had at that point said 'no it's not worth it, let's put in new poles we would have.  But this old carport has been through some pretty extreme North Qld weather not to mention the odd cyclone in its lifetime, so we were pretty sure it would continue to do its job and withstand all that's thrown at it, provided it was to be re-built properly of course. Likewise the slab has seen better days and it would be nice if it was all new and shiny to match but in all honesty it wasn't in our budget and at the end of the day it seats our car tyres...that's it.  So that would be a job that could come later when the budget allowed, (by pouring a new 100mm slab over the top). 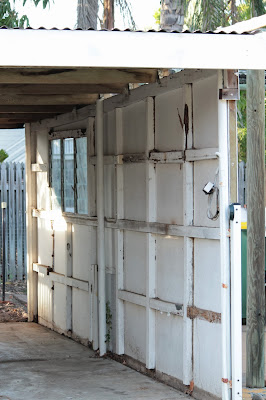 As Col had already started working again, this was my project and there ain't no way these little arms would be able to do any of this heavy lifting, so I employed a guy who lives around the corner from us called John to help me out do the heavy stuff for me!  He is an all round tradie and has just renovated a Queenslander to an impeccable standard and has so many fantastic ideas to boot.  He was super fast and had all the roofing down in next to no time. 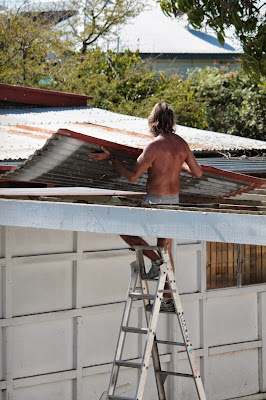 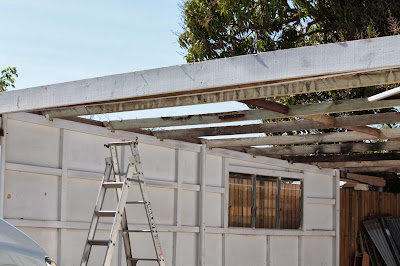 Once the sheets had been removed (I didn't worry about taking photos on asbestos removal day) it was then time to start the re-build.  Again we used Phil our stair guy, and John, between them they got the new carport up and running in no time at all. 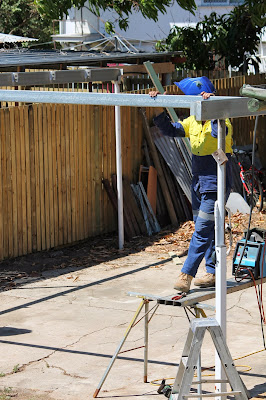 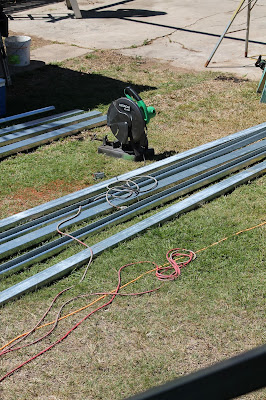 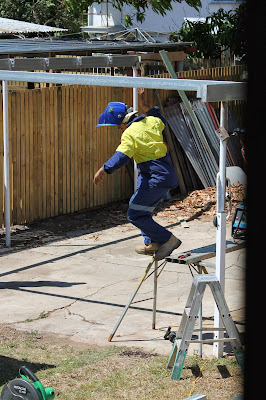 Phil trying his hand at pole dancing working hard on welding the purlins.  (Sorry Phil if you are reading, couldn't resist) 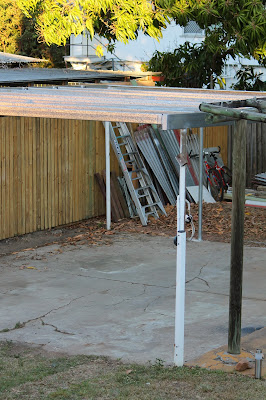 By sunset the framework was all up, notice at the back Phil decided to add two steel posts (you can see one of them in this photo) for extra strength as he felt it needed it. 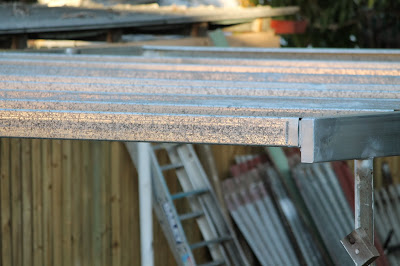 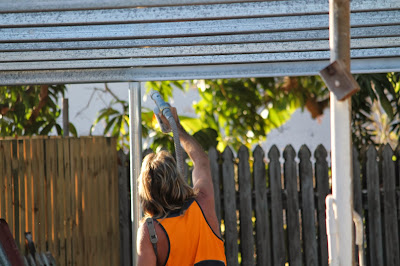 At this stage John suggested that we have him come and spray paint all the steel.  We are so glad we decided to do this as it gives a much neater, polished finish. 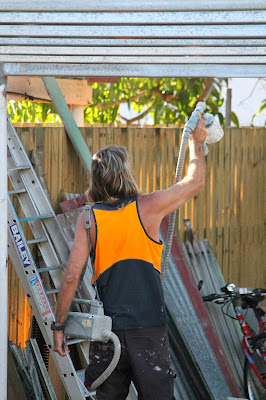 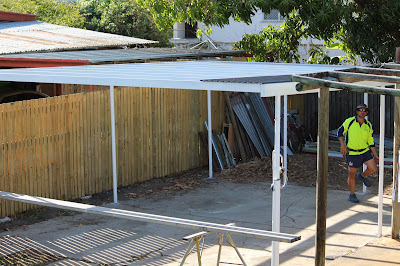 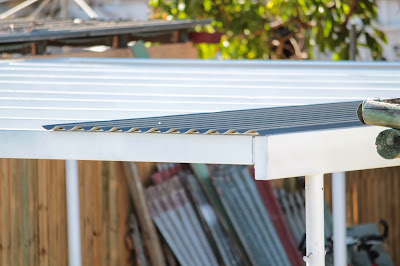 We chose a Colorbond roof in Ironstone, a dark charcoal grey colour.  Even though a lighter colour would have been better to help reflect the heat that radiates from our harsh Qld sun, this carport sits under a 30ft + tall Mango tree that produces an abundance of wonderful fruit for our native Fruit Bats (or Flying Foxes) When it's mango season the fruit bats hang gaily from the tree eating to their hearts content...and are not at all worried about where they (a'hem) poop!  Are you getting the gist? 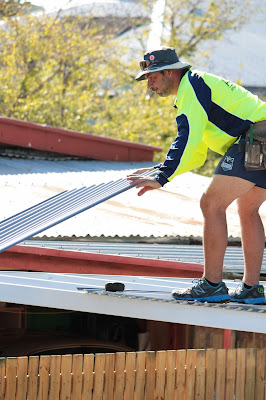 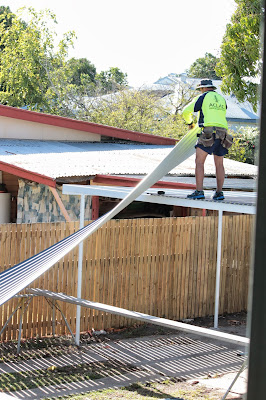 Like John, Phil works super fast but with the utmost of care and gets the job done exactly how you want it.  Before we knew it, it was all finished. 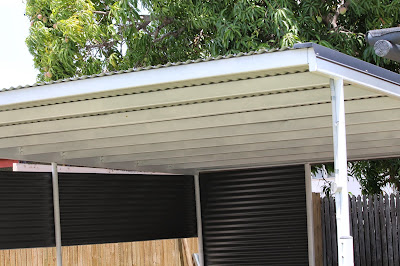 We chose the same Colorbond sheets to shield off both sides at the back leaving a gap in between.  This serves two purposes, 1) it hides the current messy dead space behind area that will house chickens or an extended vege patch and both hides and gives us easy access to our garbage bins and 2) it braces the back to add much needed strength for any future cyclone conditions.  We also added an opening from the gutter for a down pipe to go into our rain tank. (See bottom picture) 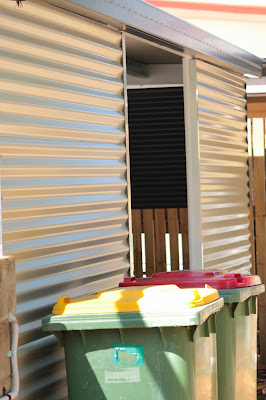 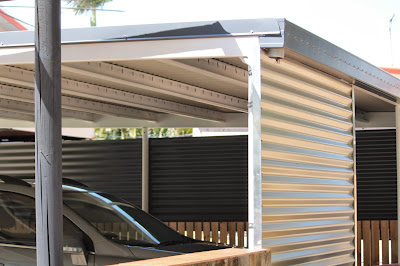 Likewise on the left side we added a spare piece of Colorbond to brace these sides.  Originally it was actually as a temporary fix as we would eventually look at doing steel cross beams to again strengthen the structure, but we liked the Colorbond look so we kept it.  (I have to admit I have slight issues with the fact that it leaves a gap at the top due to the slant of the roof but the cost of buying another sheet plus having it delivered just to fill the upper gap, stops me from acting on resolving these issues) 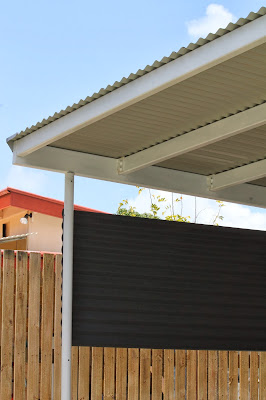 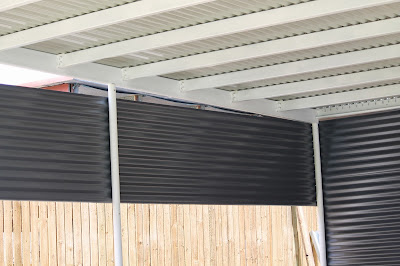 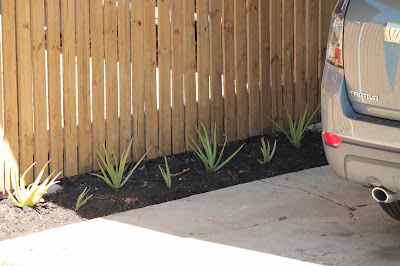 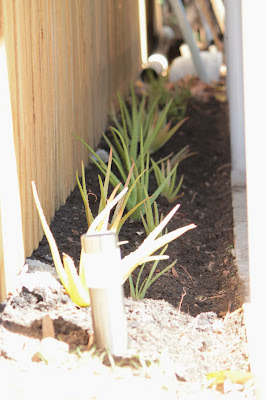 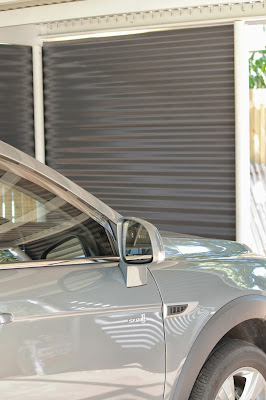 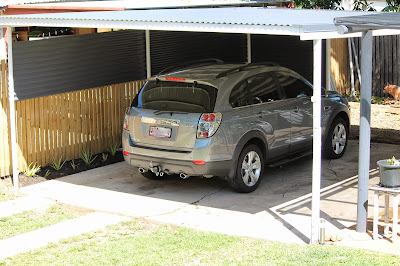 And there we have it...so after all it was a long post.  Sorry it's probably very boring in all reality but hey we love to see things evolve here and this carport although it is a boring subject matter, much like the stairs, is a very important part of the property.  With days here, even in winter, rarely going below about 25C and on an average day being upwards of 30C you need that car to be parked in the shade...period.
Thanks as always for reading,
K xx
Posted by Kate and Col at 23:14