The Small Bathroom - Part I...


... its downfall, demolition and deserving refurbishment!

Considering this is a little 1950's Queenslander we are very lucky to have two bathrooms.  They may be a tad odd in their positioning (I was very un-convinced in the beginning with the whole set up) but, none the less having two separate toilets is a huge bonus for this style and age of house.  One 'could' be classed as an ensuite as it is just off the main bedroom, but it isn't really an ensuite in the true sense I guess, as it is the larger of the two bathrooms.  The second bathroom is the smaller kids/guest bathroom, it has a toilet, vanity and shower.

Originally the house had one main bathroom which was a large, square room with a bathtub, vanity and shower.  Then next to that room, through a separate door, was the toilet.  Sometime in the last 10-15 years or so the bathrooms were slightly updated and changed around so the main kept it's original bath and vanity, but a toilet was added.  Then a section was cut out to be added to the toilet room creating a shower space and making the second room a functioning bathroom instead of just a long narrow room with a loo at the far end.

This is what The Small Bathroom looked like the day we arrived.  . 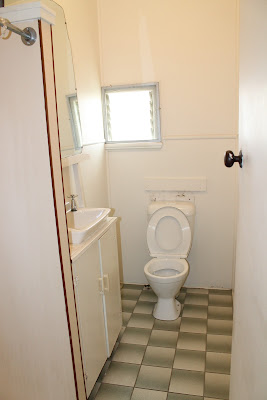 Again, I cannot stress enough that this particular picture actually makes it look far nicer than it really was, the floor tiles were a dirty two-tone green.
﻿ 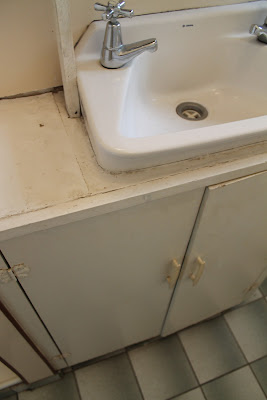 The vanity was a mish-mash of different timber off cuts, none of them appropriate for wet use. 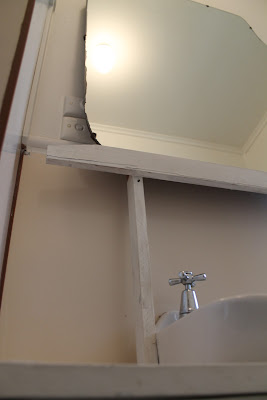 The mirror was an old dressing table mirror precariously leaning above the sink, not safe and far too big for the space. 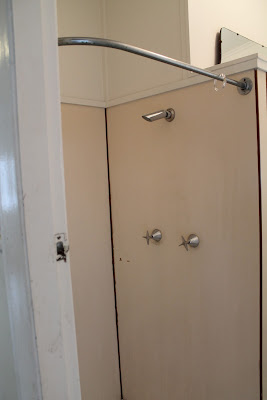 The shower had a cast iron shower tray and then these horrendous 'lami-panel' walls.

The panel walls were all stained and had begun to absorb water, and it was totally useless with the shower curtain billowing back and forth in the breeze created by the water pressure from the shower head, allowing lots of water to spray out and create a nice big puddle of water over those fabulous dirty green tiles.

We had a company come over to quote for some other cabinetry work, so whilst here we asked them if they could give us a cost to re-do the shower unit.  When the quote came back at about *$5700 just for the shower!!  We thought, whoa! We may have to just sugar-coat the bathroom for now, so that it looks better and think about the full reno of it later on.  However, after a couple of weeks of living full time in the house we realised that a simple, temporary, surface re-do was never going to be an option, the bathroom needed refurbishment and it needed it NOW!

One morning we woke up to the most awful smell coming from the bathroom vanity unit.  Over the course of the following days it got worse and worse.  The whole unit had begun rotting.  There must have been a slow leak for a very long time.  It had probably never been an issue before as our tenant was a long distance lorry driver and so at a guess we think the unit would have lots of time to dry out between uses and never got very bad.  But suddenly four people were using the room daily and the wood soaked up every bit of leaked water.  The wood had expanded 3 times its natural size and the smell was soooooo disgusting words cannot begin to explain, it was a mixture of sopping wet wood, thick mould and years of dirt...all enveloped in the heat and humidity of the tropics in February!  Nice...getting the picture?!

As soon as we had completed the Paris room we closed the bathroom down, and began the demo work; when I say 'we' I mean Col, he is our 'go to' demolition expert and is saving us heaps of money in labouring costs.  Unfortunately we don't have a great picture showing the severity of the damage, because we started ripping it out and thought about photo's afterwards, but this gives you an idea.  At this point he had taken the tops, doors and shelves out...oh my word... the smell!!!! 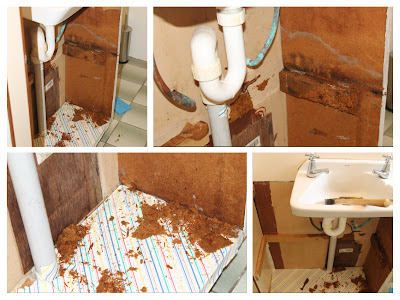 During this time we had luckily found the best plumbing company who in turn got us onto a whole heap of blokes who now make up our reno team when we need expert help.  We have a chippie, wet sealer, tiler, glazier and cabinet maker...all on speed dial who help us out when the job is too specialised or we would need specialised tools to complete it with.  Of course we also have a great electrician as well to do the jobs we absolutely cannot do ourselves (thanks goes to great friends here for putting us on to him).  And not one of them charges the earth, they are all very reasonable and all very genuine guys.  You can read more about our electrician experience here.

So we cracked on with the demo until the bathroom was well and truly gutted and ready for the next tradie to come and do his stuff. 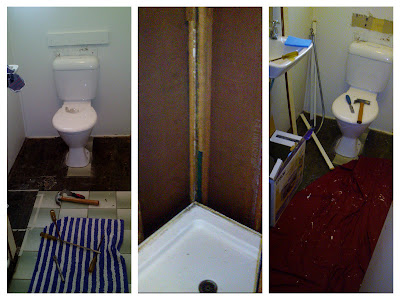 The floor tiles, lami-panel and edging came off 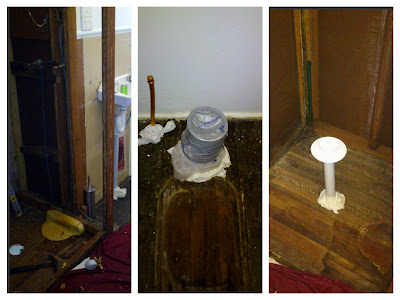 Followed by the toilet, shower base and sink (not shown), with the help of the plumbers of course!

I have to say when it comes down to demo work like this, I sometimes feel like a bit of a fraud as often I can't help with much.  For this one in particular there was only so much room in there to work, and often we only have one of certain tools etc. so there really wasn't much I could do.  So, on this occasion while he was making lots of noise, and mess, I went off and started researching all the fit out gear, yeeehaaaa!!  Spending money...I love it!  More on that next time.. 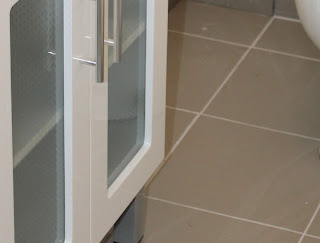 *(Incidentally, we didn't end up using that overpriced mob on any of our jobs)!
Posted by Kate and Col at 19:24