...ohhhh how I wish it had been that easy.
Whilst the bathroom was going through it's metamorphosis, the rest of the house interior was going through it's very own beautification process too.  We had set ourselves a target of 4 weeks to get all the painting done in the main living and dining areas and bedrooms, so that there was virtually no painting left to do when we moved in.  I may have mentioned before, that I love yellow, it's my favorite colour, so bright and cheerful and oh so warm. BUT when you have it in this big a space against the orange-hue floor tiles and the redy-orange splash back in the kitchen it just doesn't work. 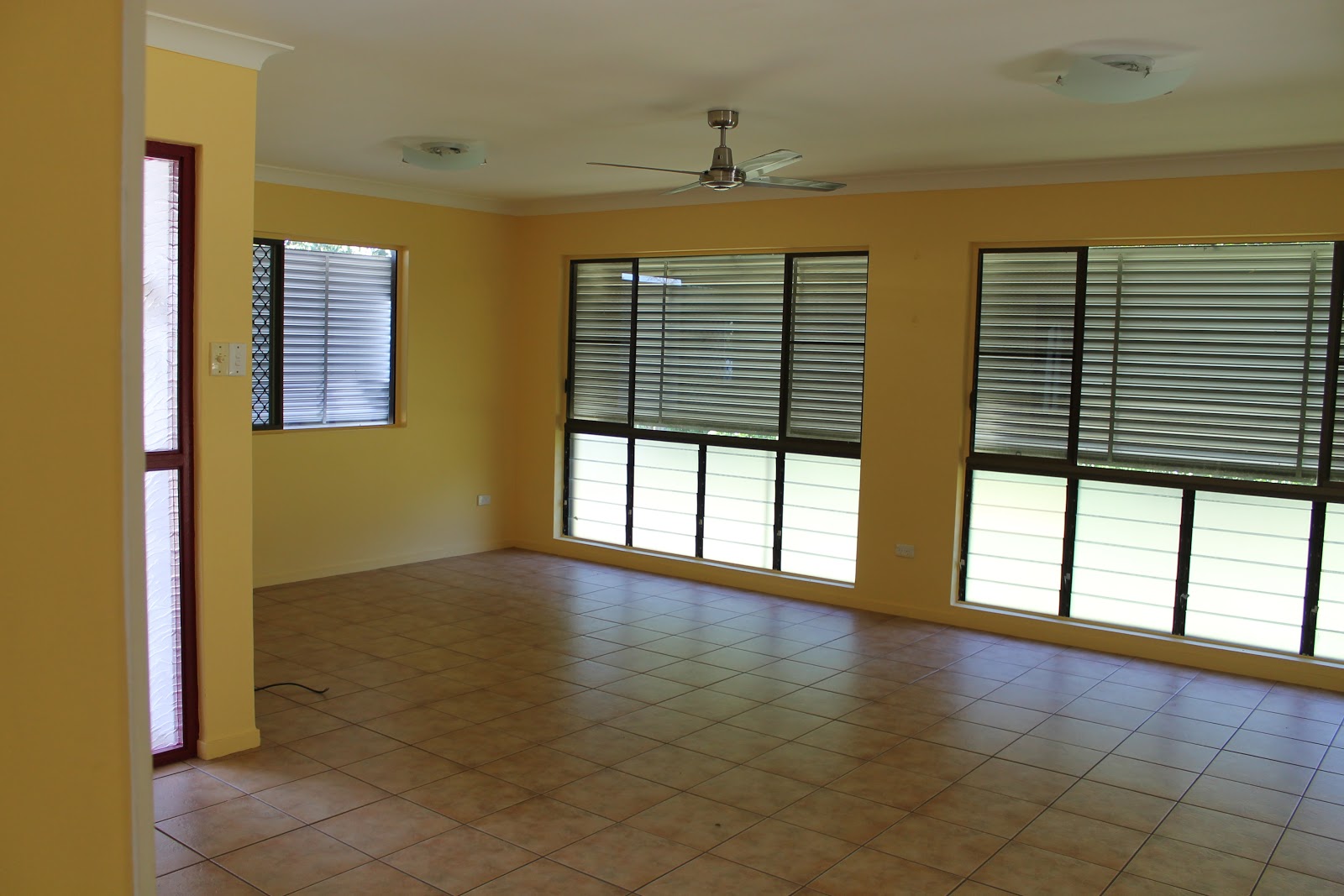 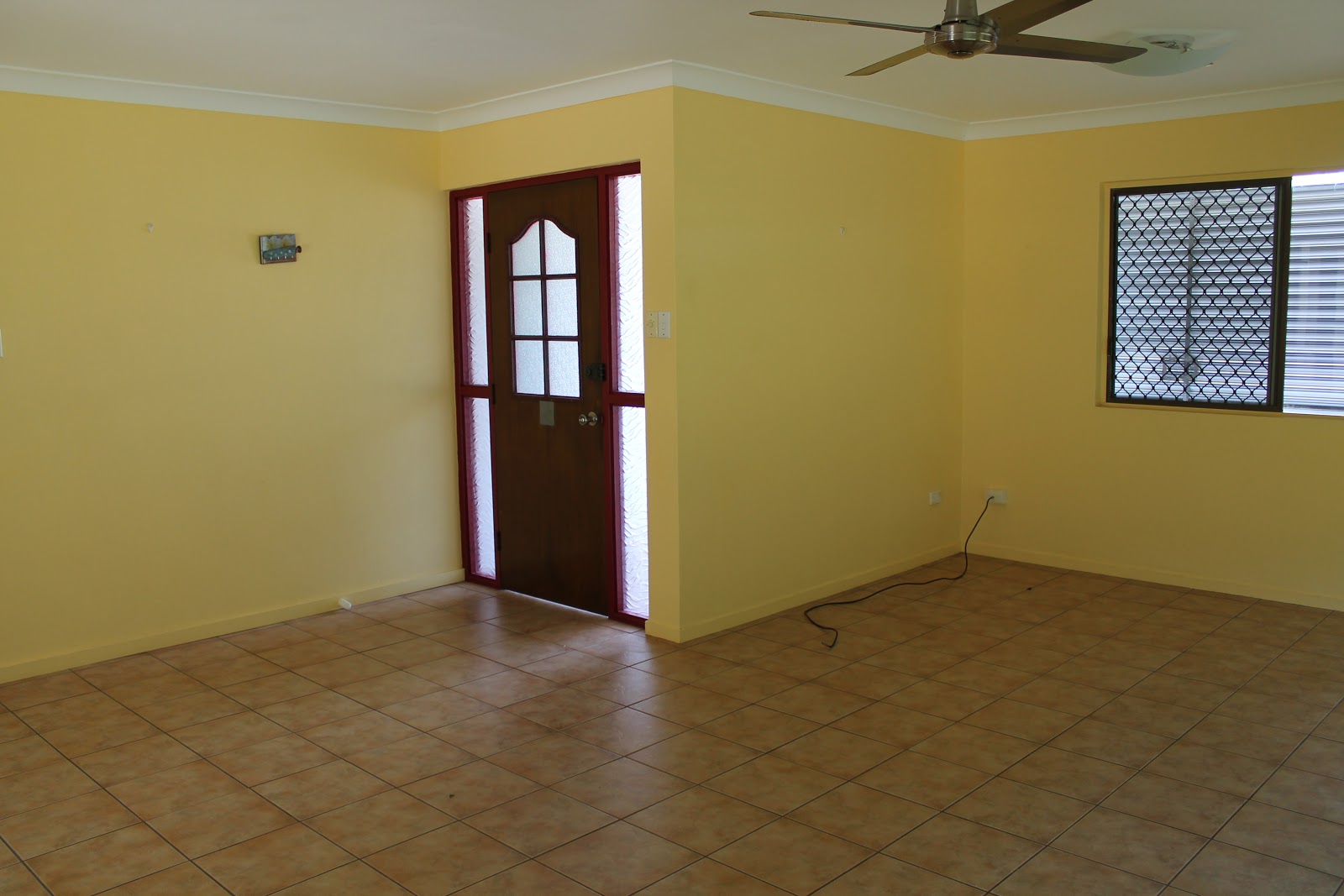 It wasn't only clashing with the door trim and kitchen tiles but it was also making the floor tiles look far more orange than they actually were. 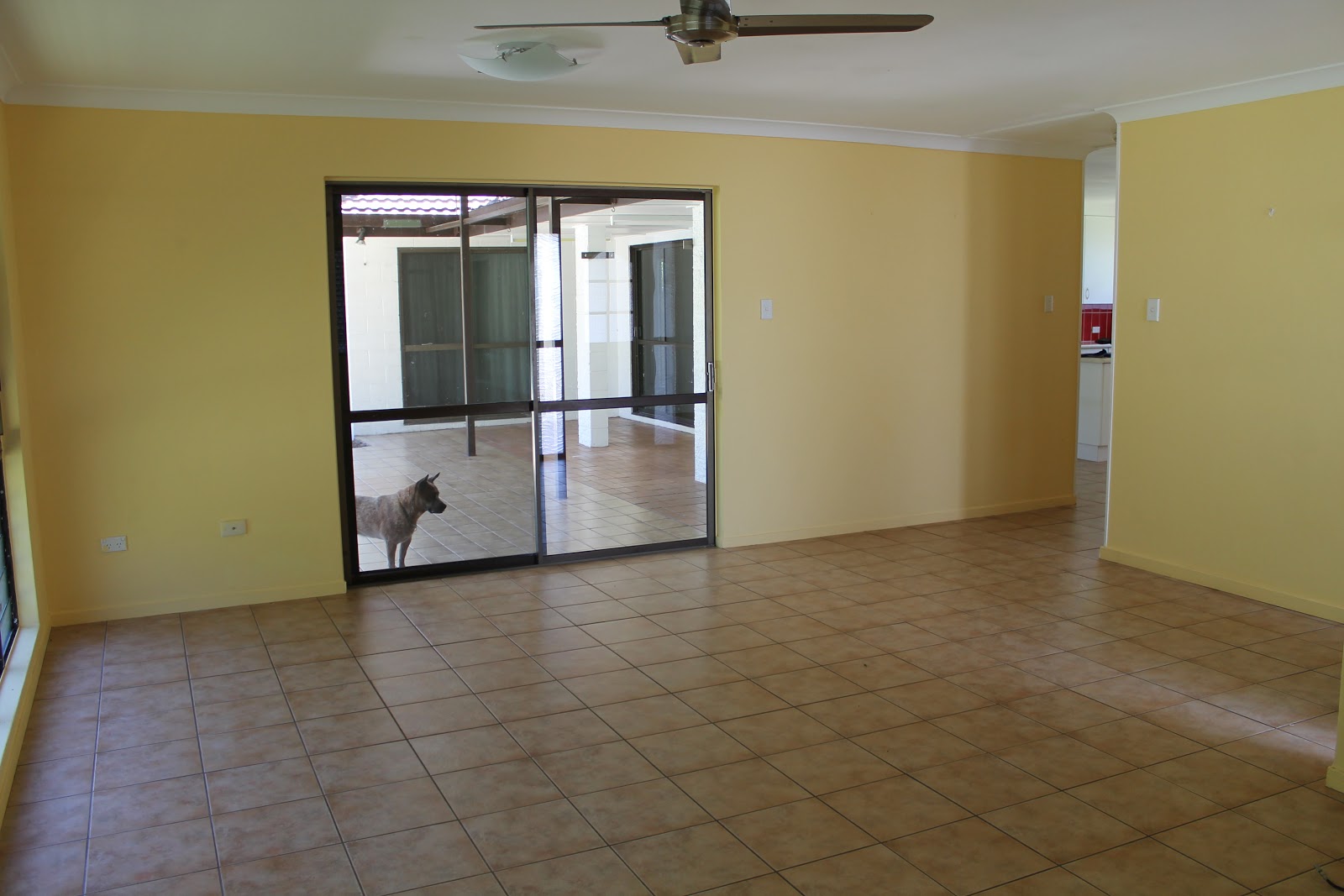 Even Red Dog used to stare at the yellow walls thinking 'Why would they do that?' 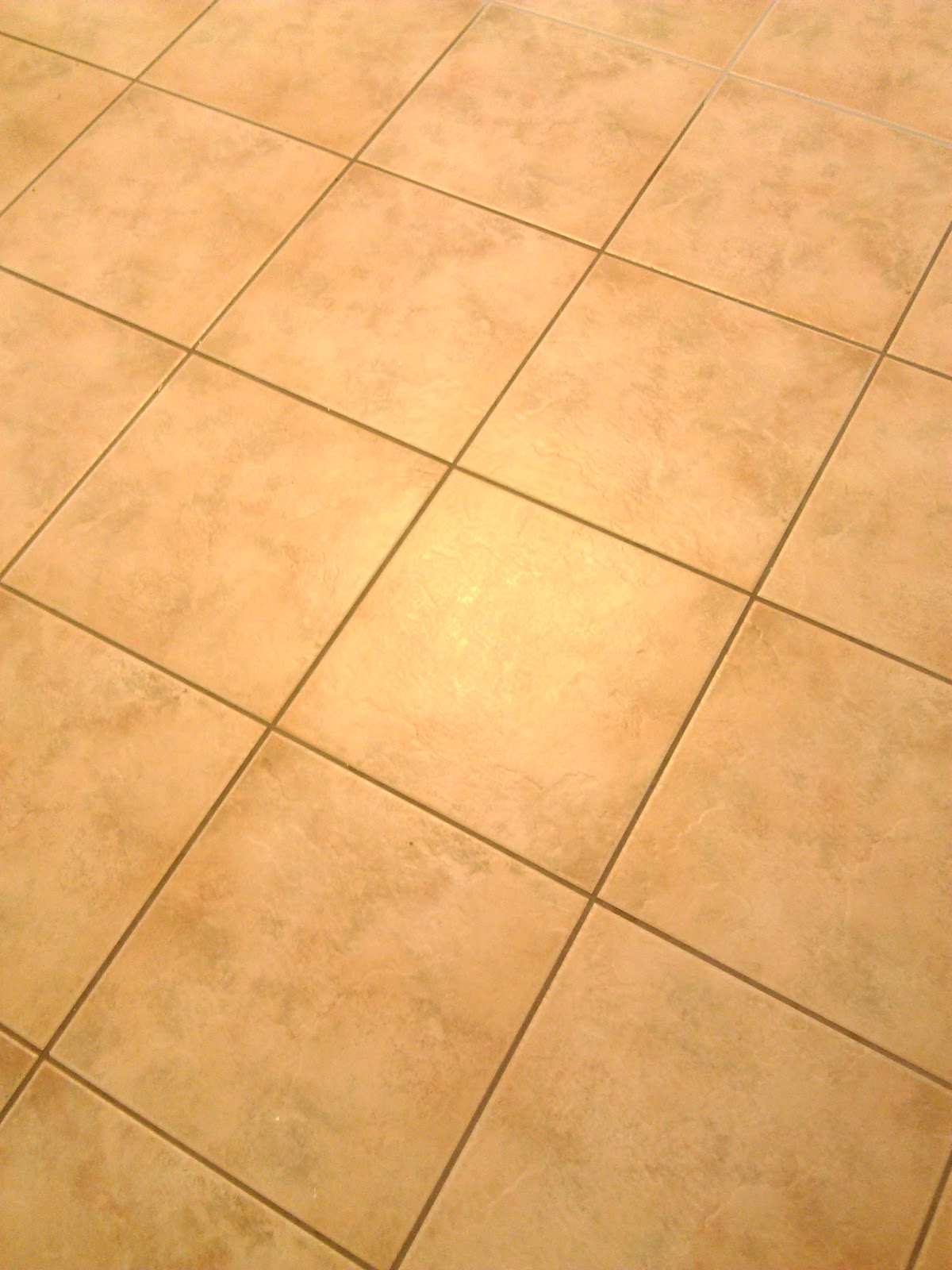 Adding to this problem were the dirty grout lines, that had 30 odd years of built up grime embedded in them, making the whole floor look filthy.
When we first bought this house, we initially thought a massive chunk of our budget would (eventually) be blown on the flooring.  It is an open plan house so the entry goes through to the lounge, dining, kitchen, laundry etc etc. There are no doors, steps or stops and starts, in other words these orange tiles go all the way through the entire house in one continuous stream, stopping only at each bedroom door, (which is where the 'beautiful' pale lemon, with a touch of 'stain' well worn carpets start - more on that another time). 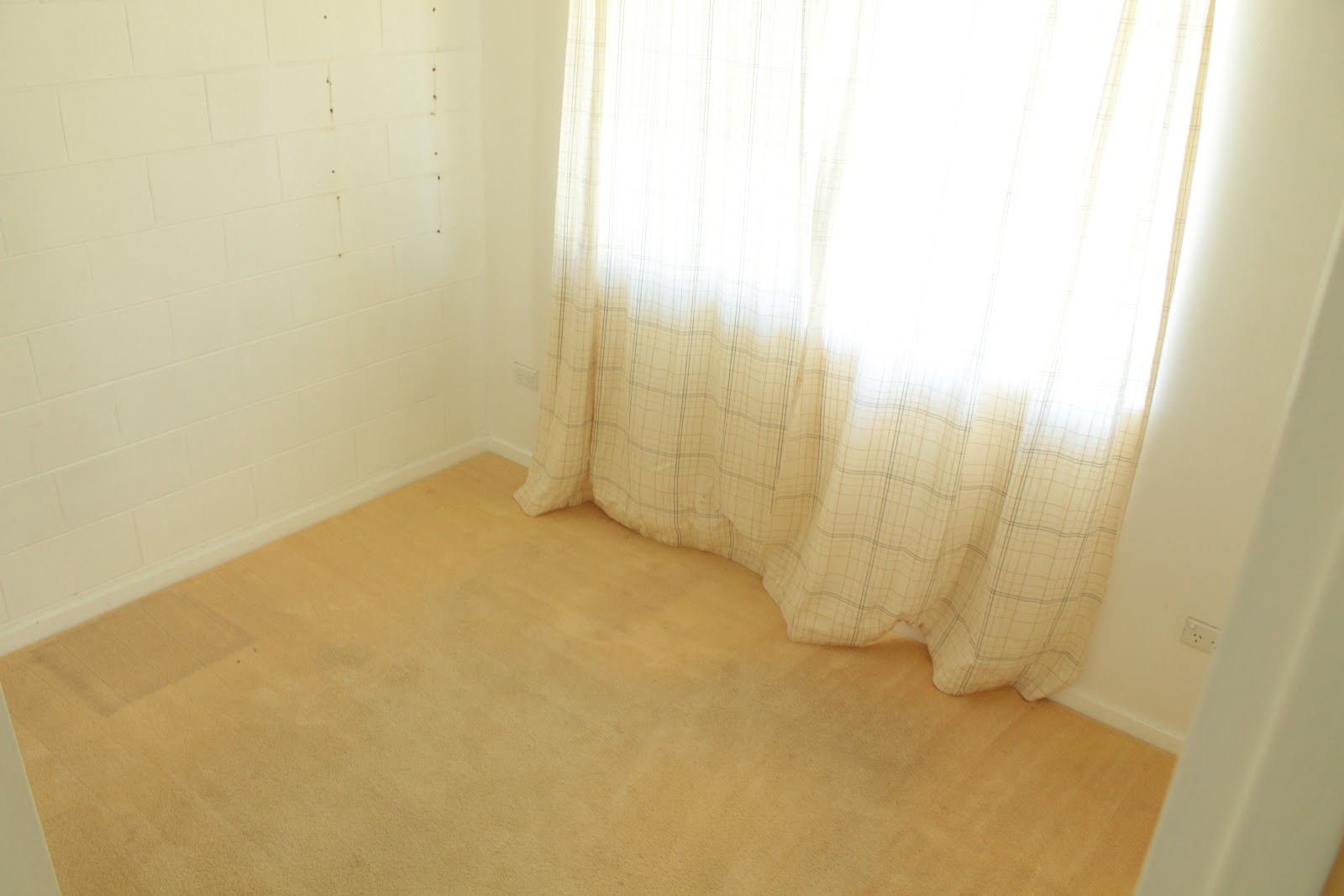 So in order for us to change the look, it meant we would have to rip the whole lot up - which equates to a lot of money.  Not only in replacing them but also on labour getting them removed.  *Note - as we mentioned before in the bathroom post, some people go straight over the top of their existing tiled floor.  Yes it seems odd on face value but when you have a level floor in good condition already then it is entirely feasible and would make a lot of sense money and time wise.  You just have to be aware that this will create a lip into other areas where the tiles are now higher on the floor you are 'going over'.  For example, in our house it would create an uneven 'lip' going into the carpeted bedrooms and tiled bathrooms.  And even though a tile store here actually suggested that as an option for when we do want to change out the flooring, it's probably not something we would want.

Being as we are both very conscious of how much we have to spend and are happy to prioritize what is really needed we knew having them all replaced certainly wasn't a necessity or an option right now either.  Luckily all but two tiles (not noticeable) in the entire house are in perfect condition, so as long as we could live with them it would be put on the back burner and maybe down the track we could budget an extra 10-15k to get this done, we are talking a lot of tiles here!  So, I had to think outside the square and work out other ways to make them look better.  More on that in another post. (Because Col says I'm waffling waaaay too much on this blog that was supposed to be a simple paragraph or two about changing walls from yellow to white)
So back to the walls, we knew our first job was to get rid of the yellow and lighten the whole area up by painting the walls white.  Yes, we chose white again, we will never win any awards with our colour choices, but we like it clean and fresh and Col was quite adamant it had to be white, bright white.  We figured it would soften down the floor tile colour and lift it all a bit.  Funnily enough Col found photo's online cached in some file from years ago through a Google search, that showed previous pictures of this home from owners before the 'yellow' came into play.  Low and behold the walls and trims were all white back then, and the floor didn't look anywhere near as orange because of it.  So we knew we were on the right track.  So white it was....now let's paint - how hard can it be...??  Answer - Extremely!! 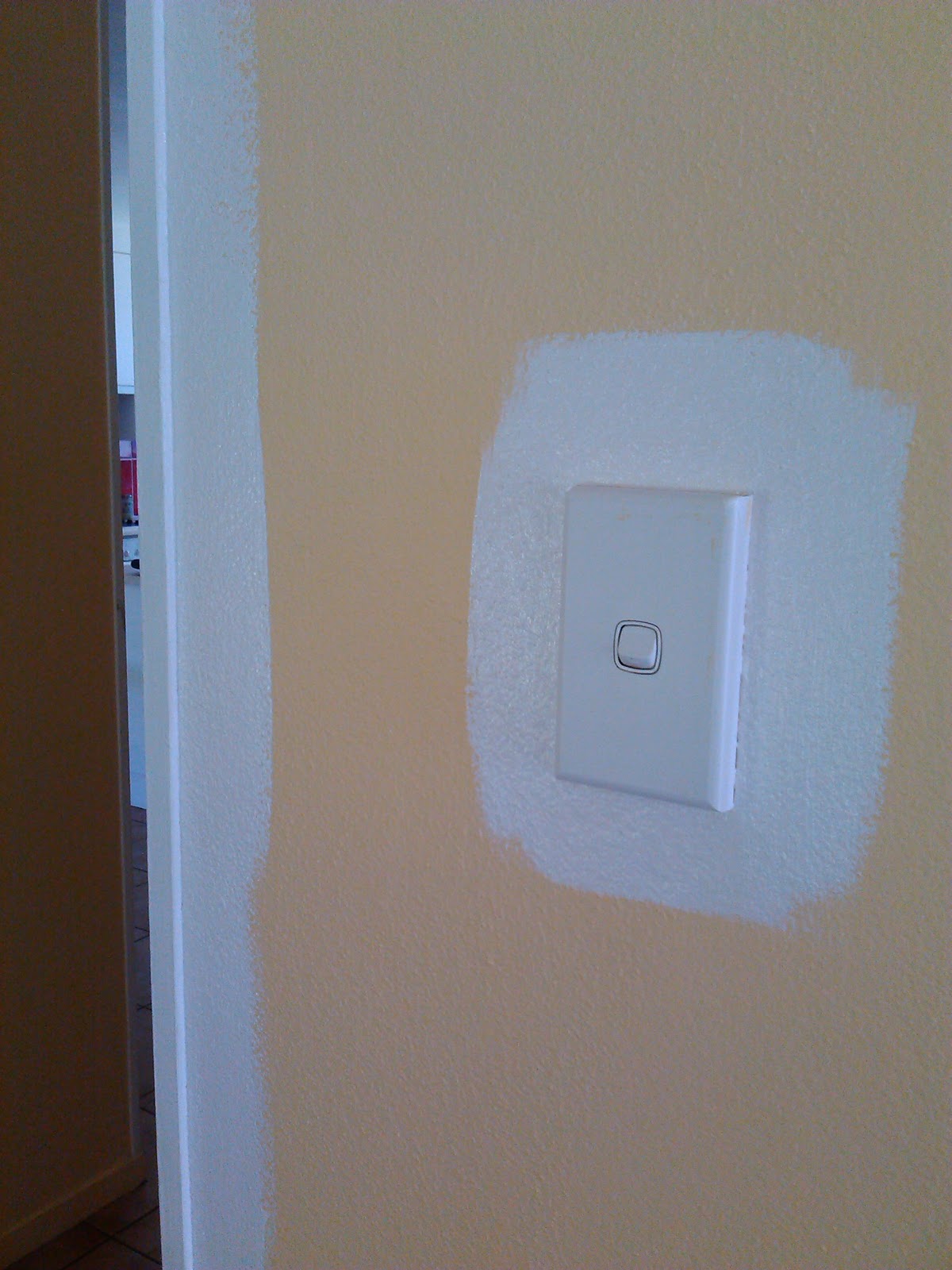 Apologies for the poor colour in this shot, it was taken on my mobile which as you know stamps it's feet in disgust and refuses to play the game when taking pictures indoors.
The first reaction I used to get from everyone in the trade when they saw my walls was, 'Wow that's going to take a bit of going over'.....'Do you know yellow is one of the hardest colours to cover 'etc etc.  So I was already prepared for what was going to be a hard job, and I went off to a hardware store with a sample of the yellow and explained that I wanted to paint over it with Taubman's Crisp White.  They told me to use an off the shelf, non-tinted white based 'paint and prime' formula first and then go from there using the Taubman's Crisp White.  They said the 'paint and prime' is the equivalent of two coats of normal paint so it will be fine, I unfortunately took their advice and started.  It was a little while before I realised it was my BIG mistake #1.  Even though the shot above looks like it is covering it nicely...it is not.  Yellow is indeed a hard colour to paint over. After a full day of painting I looked back at the first wall I'd done (nearly dry) and the yellow was already showing through.  Ok, so I wasn't too put off by this yet, I knew it would take more than one coat, so I came back the next day and did the second.  Again by the time I was leaving for the day I looked over at the first wall - now with 2 coats and BING! - there was the yellow....Grrrrrrr!  Unfortunately I don't have any pictures of all this because a) it was a very exhausting and frustrating process and taking photo's was the last thing on my mind - and b) the light wouldn't have allowed a decent enough shot to show what I mean.  But trust me... you could see it showing through.  I now had a dilemma on my hands.  I went straight to another paint store, the awesome guys at Home Hardware in the City, armed with pictures I showed them what had happened and what I'd been told.  They were amazing.  Not only did they tell me that I'd been given the wrong advice to start with (see below) but they also noticed I had been cutting in all my walls at once then going back to roll...another big no-no - Mistake #2. 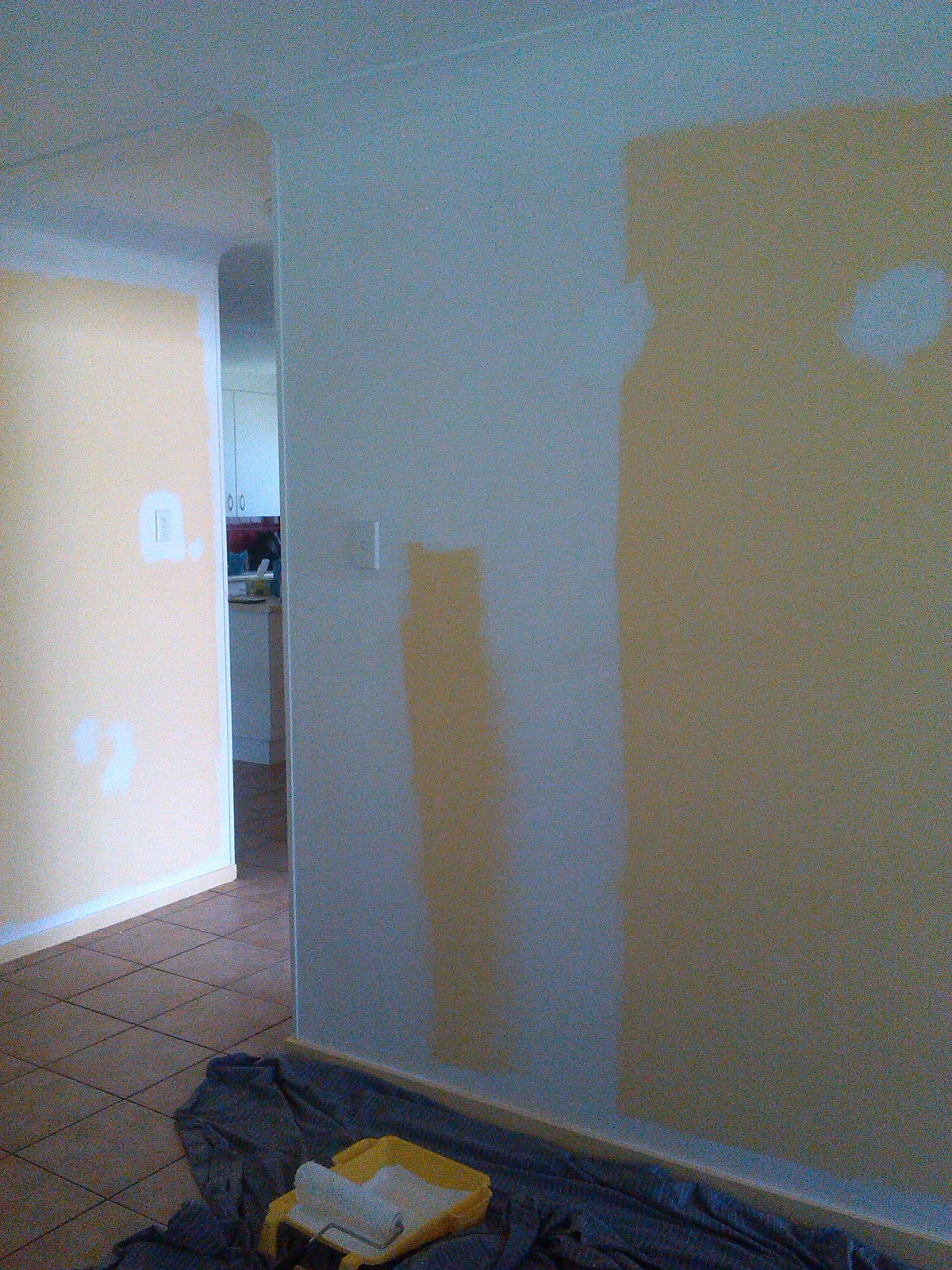 Again apologies for the worlds most awful photo - but it was all I had to demonstrate my stupidity how much cutting in I had done at once = too much.

We had painted the other house in the exact same way but what I hadn't taken into account was that Col had followed me round with the roller so there was always a 'wet-edge' from which to roll.  This makes for a much easier and more even paint job.  In this house I was doing it all myself so just thought it easier to do the cutting in all at once - however, because the edges were drying by the time I'd go back with the roller it had left them much more noticeable.  So I needed to cut in and roll much smaller areas, I had to stop and remember Poppy's constant sage advice, 'slow and steady wins the race Mum' (unfortunately for her, she applies this strategy to everything, including sprinting races at school sports day - yup, not so good).  Anyway the wrong advice I was given initially was to have started with an un-tinted white.  If the original store had simply put a few shots of black in my paint to begin with it would have collected some of the yellow pigments making the second coat much more likely to cover evenly and quickly. The Home Hardware guys gave me a full on painting lesson there and then in the store (awesome) and sent me on my way.   As I had already begun with the un-tinted base, I pretty much had to carry on the same in this room as I was afraid it would be uneven if I stopped and started with a different shade of undercoat on different walls etc.  So I had to just battle on, although now with much better technique. 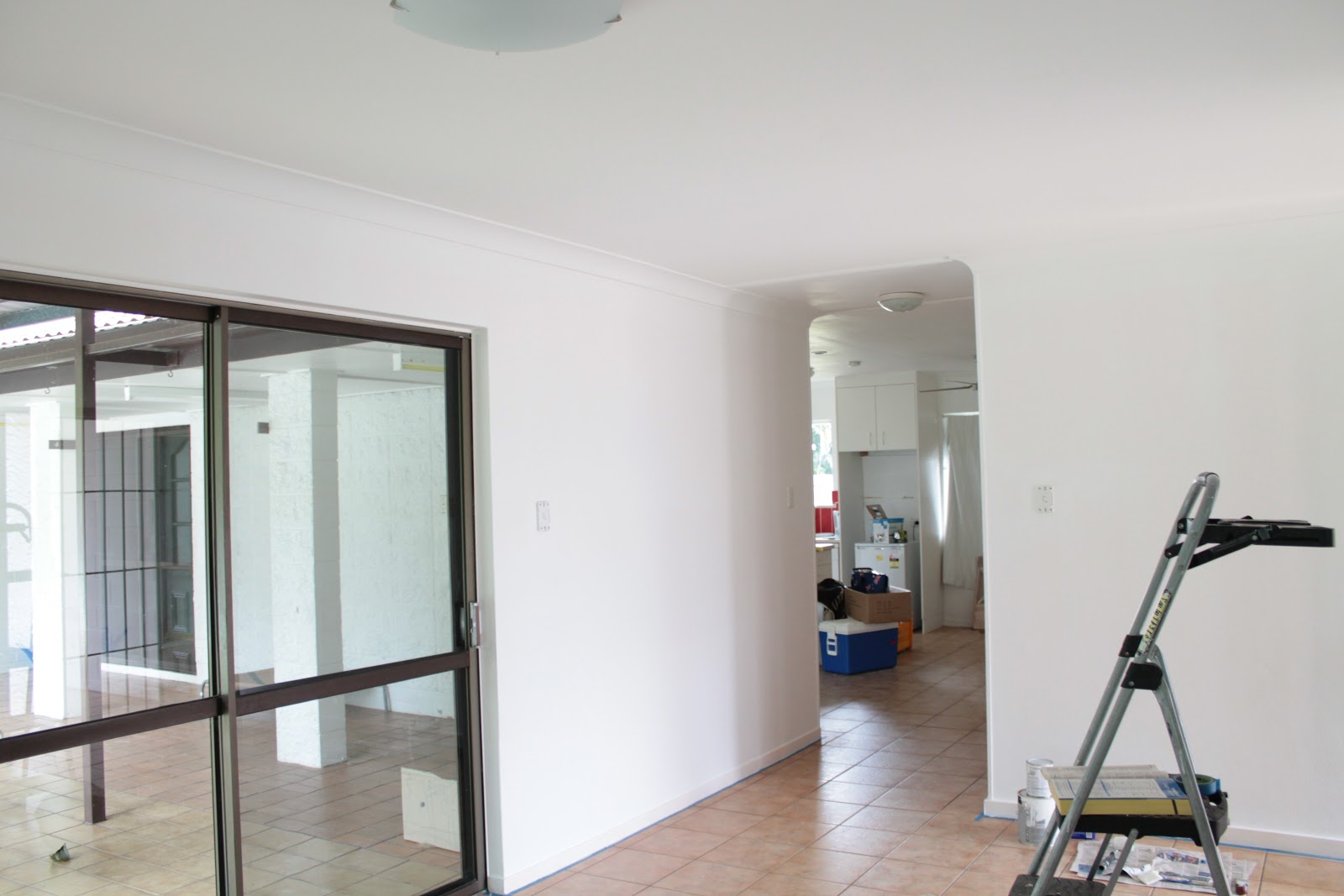 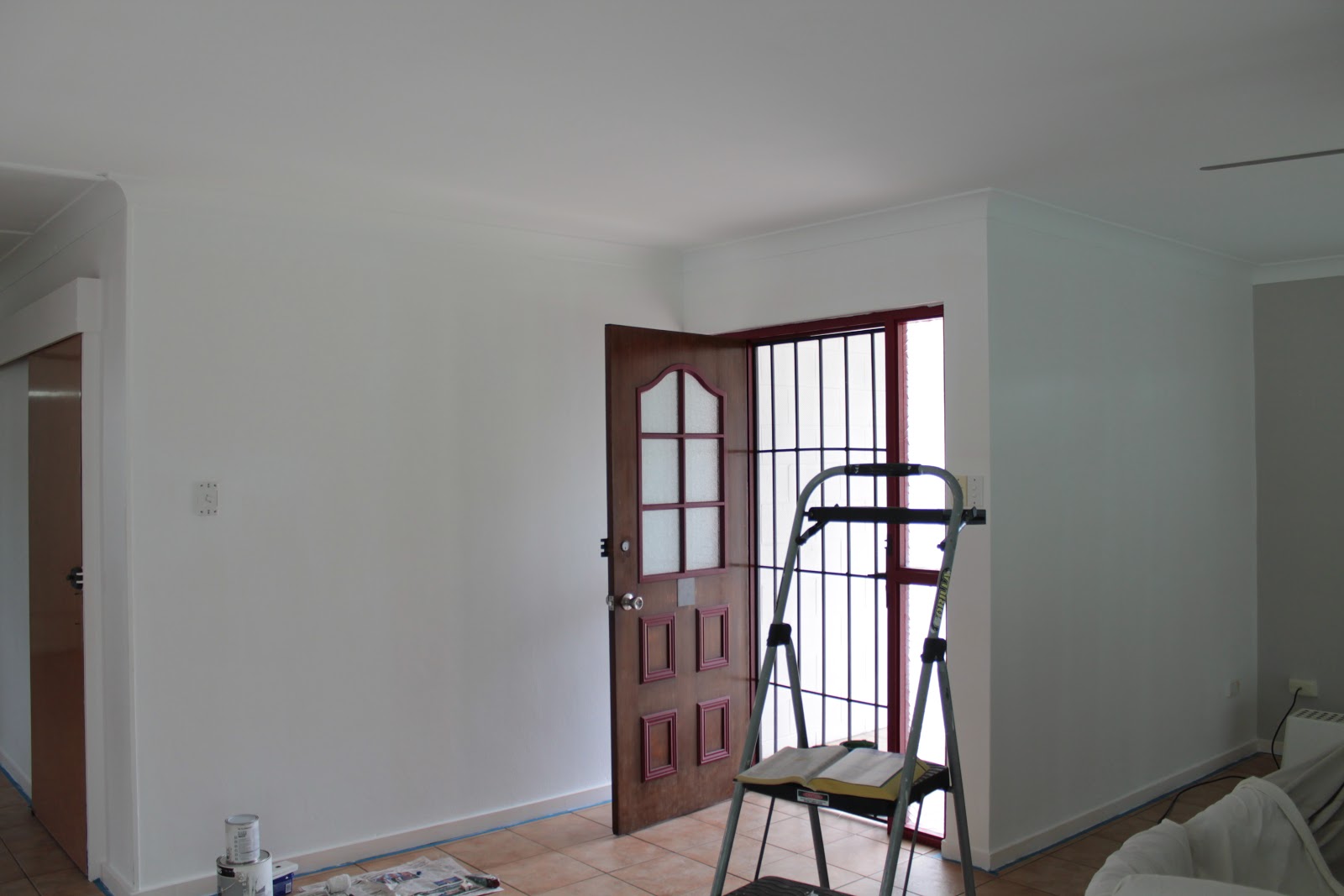 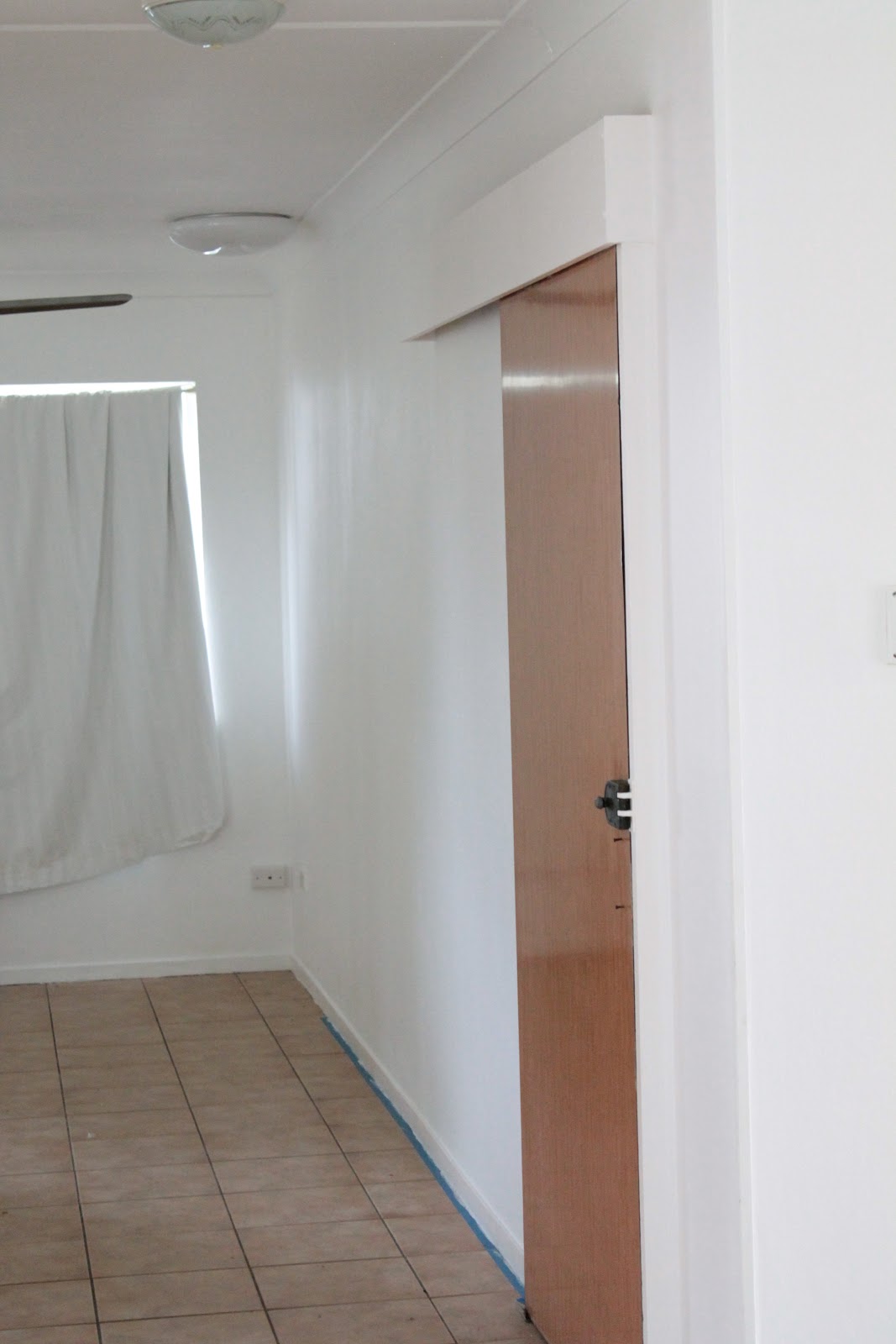 It ended up taking 4 coats, one of the undercoat (which is really 2 coats in itself) and 3 of our top coat.  Gahhhhhh!! Enough!  By the time I'd finished I was sooooo over painting but then decided (in my madness) to make more work for myself by adding a feature wall.  I had already done two fantastic feature walls in the girls rooms, and loved the idea of having one wall in the lounge a different colour too.  I began looking at colours that weren't too different or contrasting, Col wasn't that 'on board' about my idea so I had to stay neutral-ish, I decided on a white/grey tone, 'Dulux Limed White W'  Anything in the more cream/brown range would alter the look of the tile colour yet again, and being as it was a grey, if Col really hated it I could (hopefully) paint over it without too much difficulty.  Luckily we both loved it. 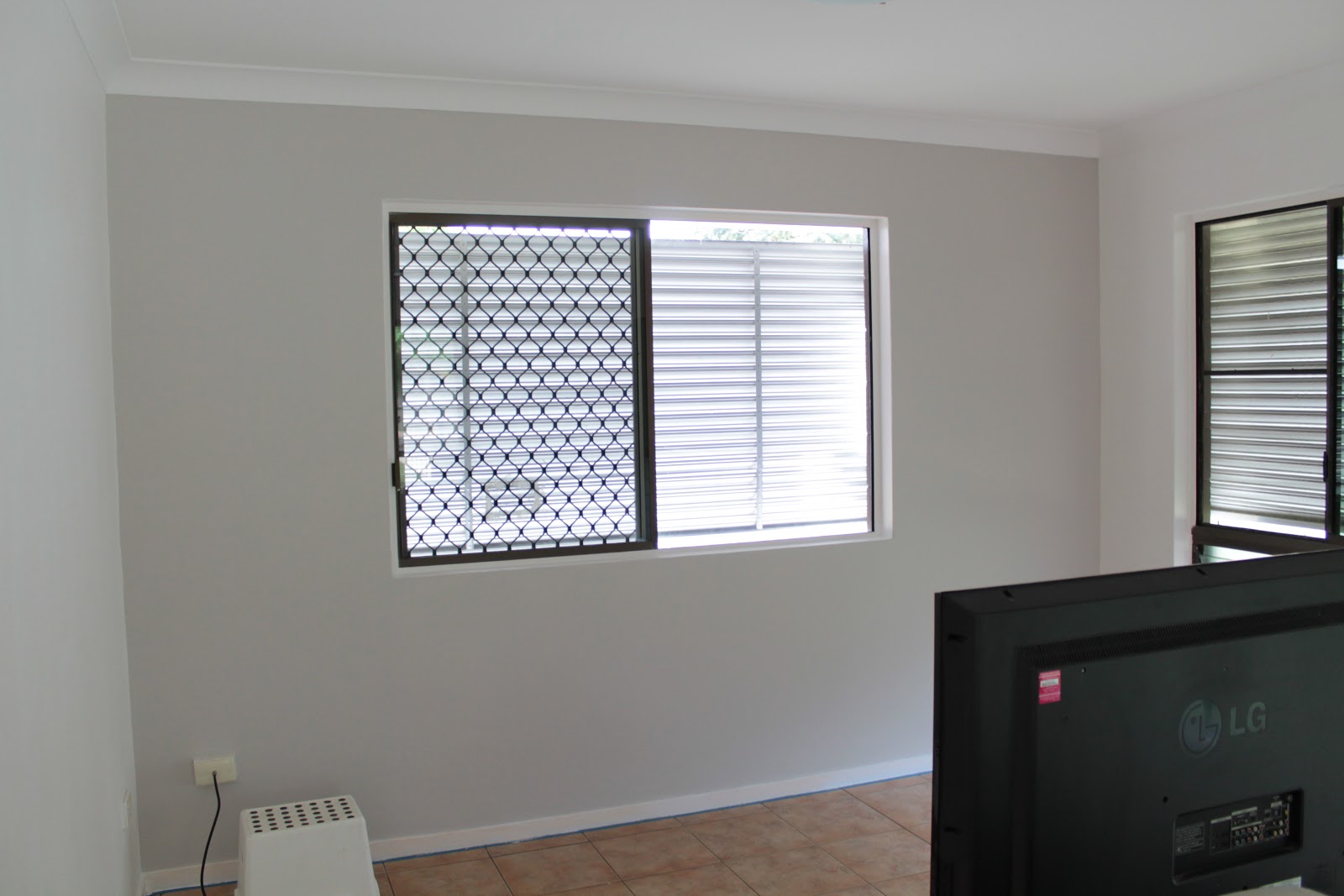 This is actually a great example of how colors can totally alter the warm feel of a room, although the yellow wasn't our ideal it looks so warm compared to the cooler grey and white look.  But once our rug and furniture went it, it warmed it up again and we are so happy with the results. (More photo's of the finished room another time). 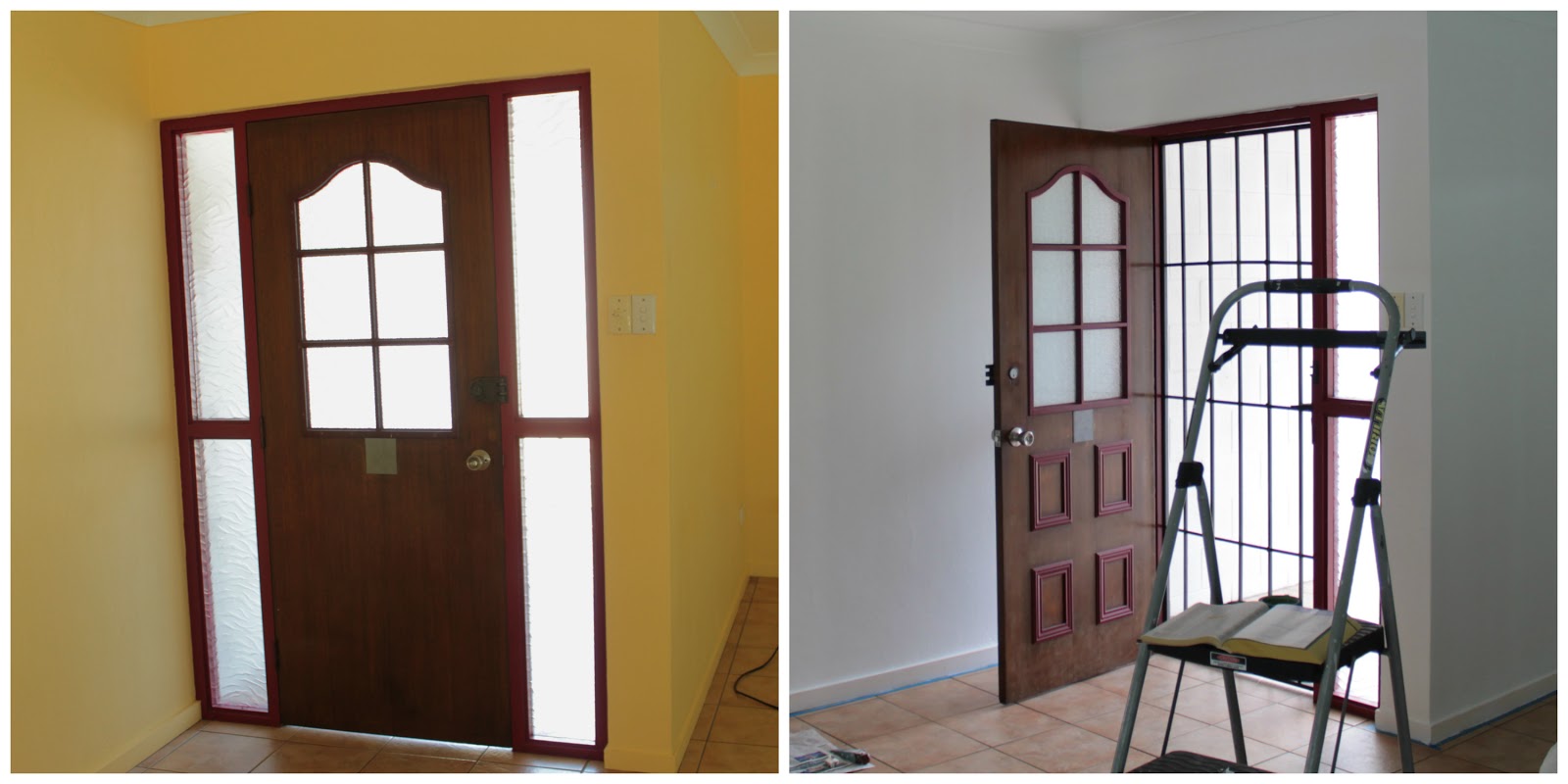 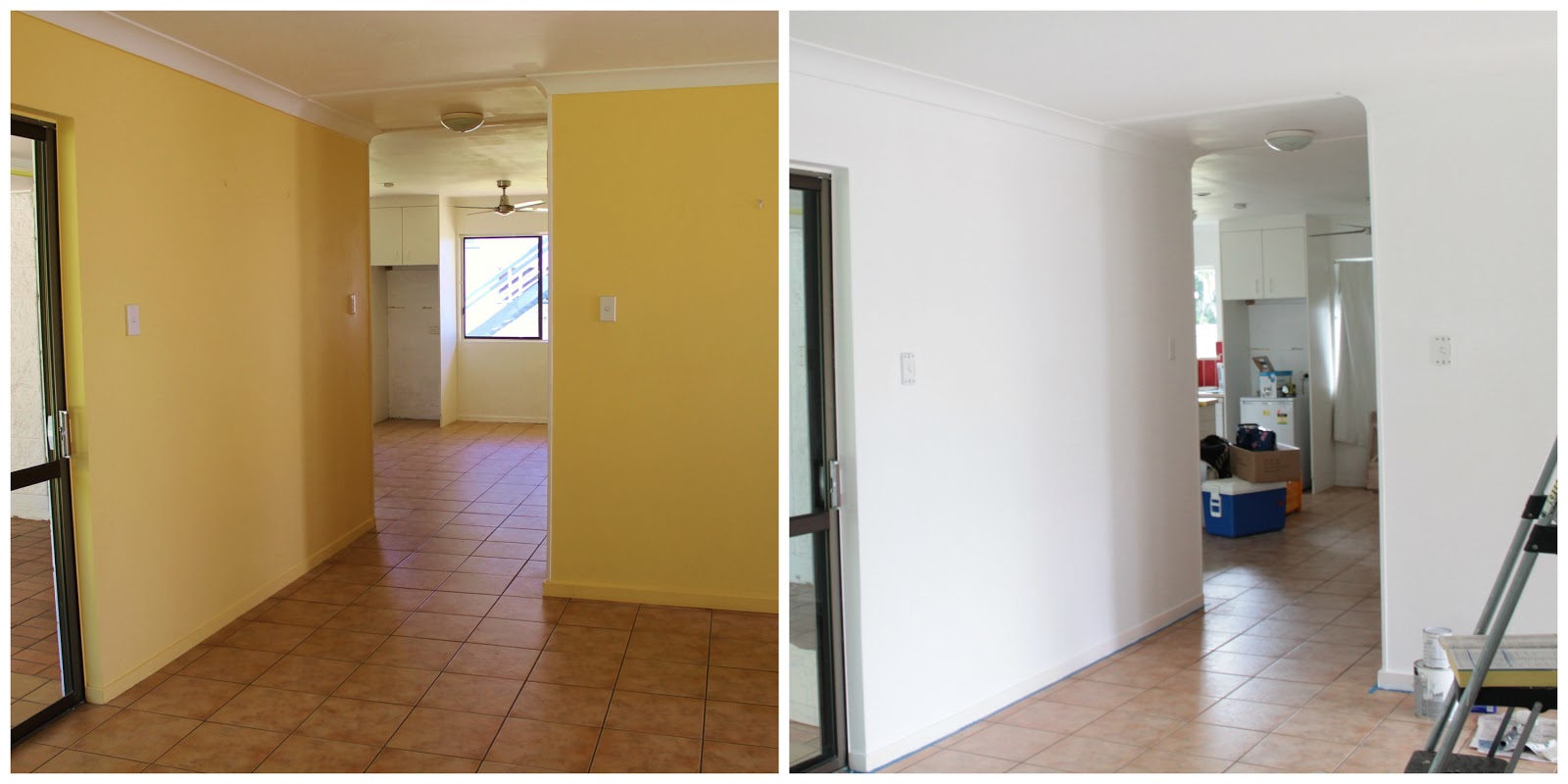 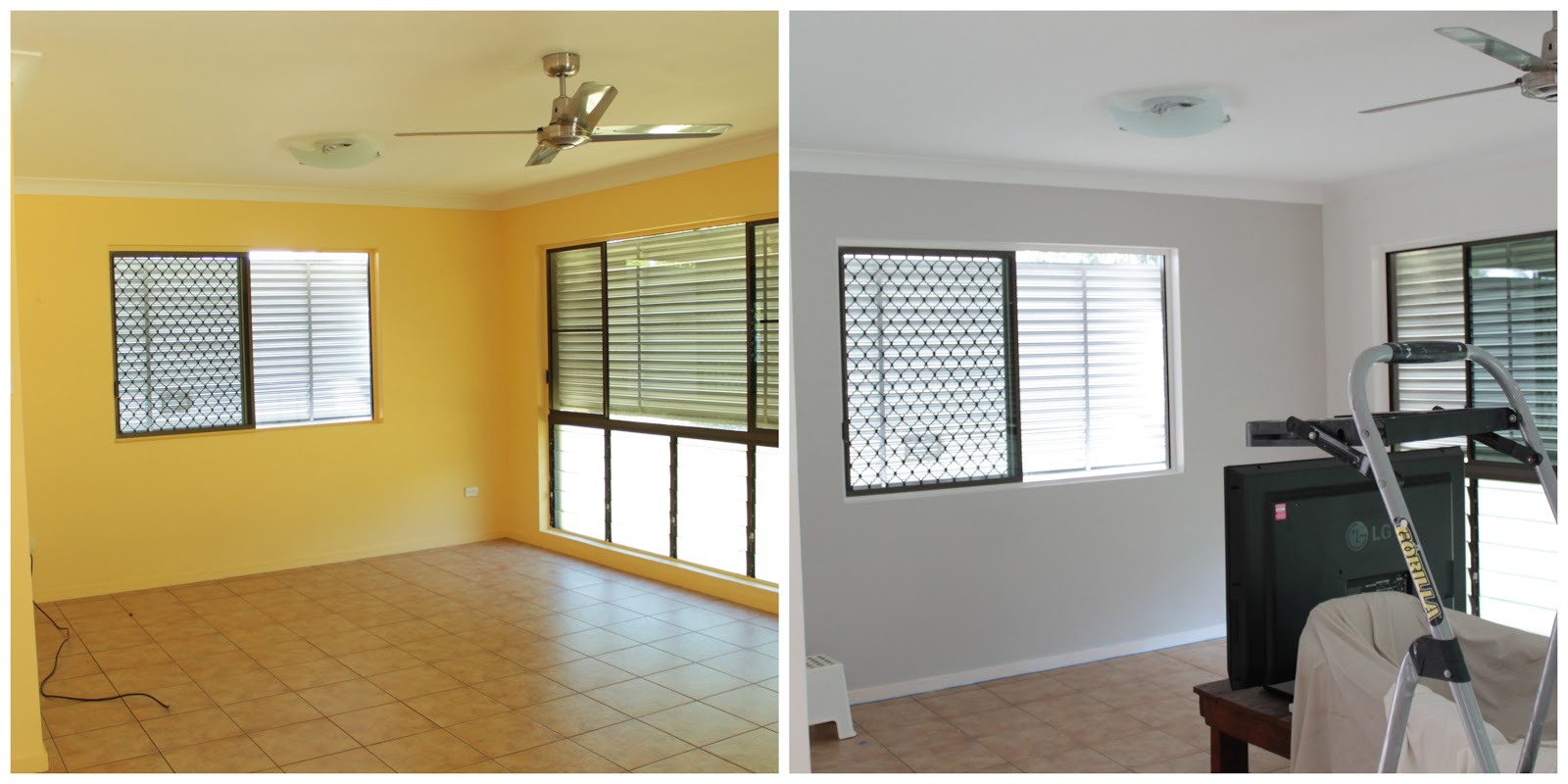 Hopefully you can see in this picture how the change in wall colour has made the floor tiles look way less orange.  Yayyy!!

I was going to reveal my secret weapon in the floor tile grout assault, but Col says, 'Enough already', so that will have to wait for another time.

So after painting two entire houses in less than 15 months we would like to follow in the great footsteps of Joel and Benji, by singing at full volume - We are Done!  Unfortunately we still have a little bit to go when we do the kitchen re-fit, but that is a little while off yet.  So for now we can rest our weary paintbrushes and chill out for a bit...'aaahh'.

Hope you like our new look....or do you think it's too cold?  Feel free to hit us with your thoughts, and as always thanks for reading! :0)