Well it seems that time has once again beaten me in getting the last few posts out for 2013.

We only had Sasha's room re-hash and the entertaining area to post about.  But alas the entertaining area is only 95% complete and although I had Sasha's room spring cleaned, and suitably ready to be photographed last night in anticipation of a post today, she and Poppy spent a big chunk of the day messing up my gorgeous tidy room playing in it holding a tea party for Poppy's new teddy so it's not so tidy anymore!  So again, it will have to wait.  Instead I am doing a slideshow * to see the year out and what better way to finish off the year than with a story that is funny, sad, loving, giving, and with a little bit of luck, determination and reminiscing all thrown in..!
*update this was meant to be a short 10 line /5 picture mini post, but has turned quite epic so feel free to skip it!

You will remember from here that our dog Red is our resident security system.  He is a great guard dog, but also a loving member of our family, even though he is 12 years old, he still plays like a puppy.  Given that he is a cattle dog, he LOVES retrieving.  He spends hours rounding up his toys and is a real larrikin too.  He learnt at a young age how to 'throw' his own ball, by flipping his nose gently under it whilst it was rolling and flicking it into the air, so that he could play fetch when we weren't home.  He also taught himself a new trick in this house where he carries his ball to the pool, places it on the side and nudges it into the water with his nose.  He then sits there patiently waiting for the wind or pool filter to slowly float the ball around, watching intently to the way the water is flowing, then runs round to the side or end of the pool and waits for it to get close enough to lean in and grab it without falling.  Hours of free fun!!  He is a total crack up.  In all honesty he was wasted as a family pet, he would have been excellent at his job and would have produced a long line of excellent working dogs had he been able to mate!  But still we are soooo glad we saw him that day we went bed shopping!??  (I know right?!) So where am I going with this story?

Well, the only problem with Red's ridiculous retrieving obsession is that he goes through balls, toys and dog Frisbees as fast as we can buy them.  Not only is it rubbish for us because we have to spend stupid amounts of money on play equipment but it's also rubbish for him because when he does destroy them (generally 2 days for an average tennis ball) it may be a day or two before we get chance to replace it.  And that's when things go wrong.  For example another trick he has learnt recently is how to tug on the hearts of every neighbour in our vicinity by tricking them into throwing his ball for him as they walk by or even if they are just pulling up in their cars.   If they make the fatal mistake of glancing over at his puppy eyes, he quickly jams the ball through the fence wire, luring them to waste 10 minutes of their day by coming over and throwing it 'just this once Red'.  LOL it is hysterical to watch.  And if by accident we shut his toy under the house, he will improvise! The other day I caught him throwing one of the kids sand buckets high in the air to get it over the fence to the neighbour on the other side to throw.  Sand and seashells being hurled all over the garden.  OMG, he is hilarious!  Luckily there is a company out there * who knows what poor Red and other boisterous dogs are going through and they fixed the problem by creating decent toys that just DO NOT break!
*this is not a paid ad or anything I just love these guys and their products


We have been using their gear for years but unfortunately on one of our moves all his toys got left in the yard and we had to buy new again in Townsville.  His usual toy is the standard catch ball that you see in his pictures on our blog, ($17 each but we've had this one 7 months so far and it shows no sign of wear) but for Christmas we decided to get him a new one to give him more choice. 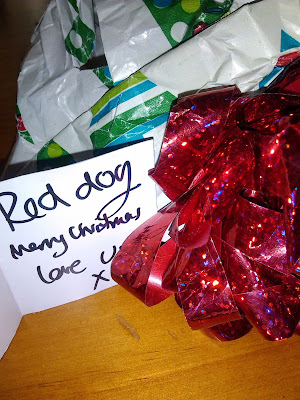 Same toy, same colour but with a superb long webbing strap in it so that
a) your hands don't get covered with dog slobber when you throw it, and
b) you can fling it really far at the beach etc.
He was soooooo excited when he saw it, and could not get downstairs quick enough to play with it on Chrissy morning! 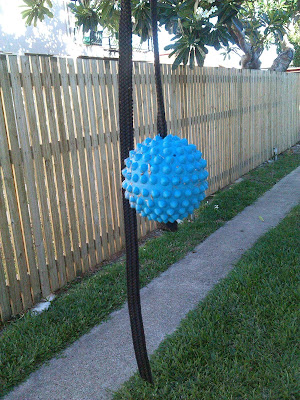 After a couple of goes with the girls, with Col and I telling them to 'be really careful when you swing it', and 'don't throw it too high' etc,  I decided to give it a go and the blasted thing took on a mind of its own, no seriously it did, and flew up to the roof....IT FLEW I tell you!!  No joke that dog gave me the funniest look, it was like we were both watching it in slow motion.  He watched it go up and at first he was like 'Yeah good trick, now where'd you hide it?' running round me in search of his beloved new toy.  And then the realisation hit and he just sat and stared at the roof. 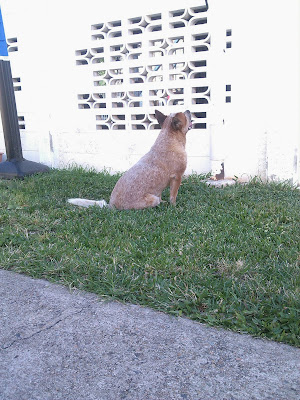 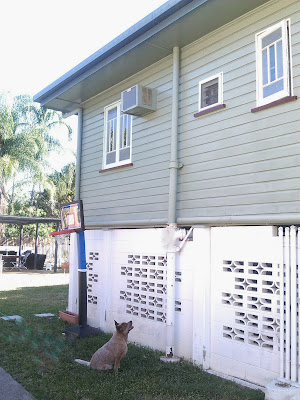 The poor little man was devastated, I was in the dog house and Col just rolled his eyes every time he looked my way!  We tried unsuccessfully to reach it with our crappy little ladder but it had wrapped it's little webbing tail round the pipe vent on the roof and it was no use.  We needed a bigger ladder!  So, all through the Chrissy holidays our little boy just sat there staring and occasionally consoled himself with the other ball, while we tried to work out how we were going to get this thing down without spending $300+ on a new ladder.  Then as luck would have it, we were looking through photo's of our new house, prior to a visit today to measure up the floors etc, and spotted this little gem!  There in the garage hanging from the roof near the roller door is a huge extendable ladder.  Our huge inherited-at-time-of-purchase extendable ladder!!  AWESOME!
﻿
﻿ 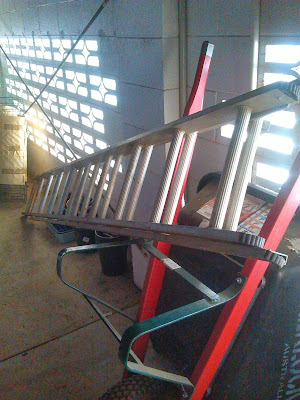 So we got that baby home and with the help of our friends trailer (thanks Nath), and Poppy's mini gardening rake Col climbed up and hooked down that pesky ball! 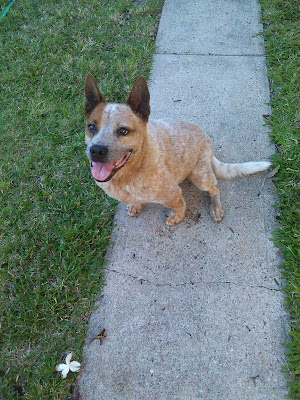 Red looked on in anticipation, with the smile on his face you would have thought it was Christmas..a'hem..literally
No sooner had we got it down he was bounding around throwing it in the air and dumping it at our feet to play, he was sooooo happy!﻿ 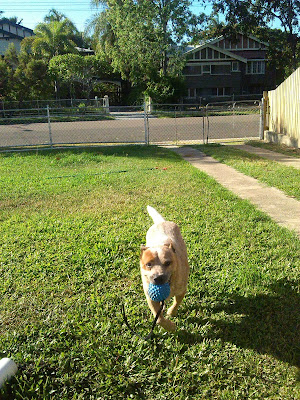 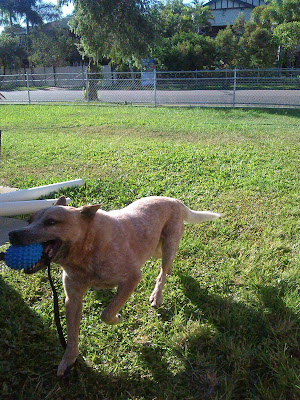 You can practically see his joy!
I just went downstairs to check on him and this is how I found him.... 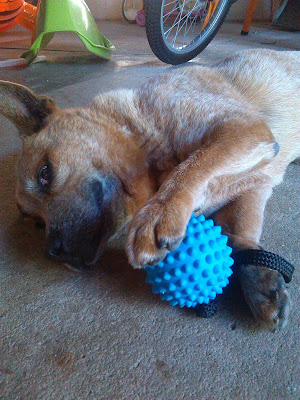 I said 'Aww look he is hanging on to it, he loves it so much' Col said, 'No, he saw you coming and thought - she's not getting hold of this little baby again!'  Either way buddy I don't blame you!  Thanks for being todays inspiration my little Red Dog, Happy New Year Mate!
And Happy New Year and thanks to all our lovely friends and family for taking time to read our blog!  May 2014 bring you health, happiness, fun and joy and most of all... long ladders when you need them!!
Kxx
﻿
Posted by Kate and Col at 20:03