As you know, it has been AGES since I got round to writing a post....luckily Col has somehow found time to punch a few out in the last few weeks in between study, looking after a sick household, doing the school runs, and pottering in the garden/under the house etc (I really think he should change his name to Col Timemanagementextraordinaire Lea) BUT.. I am now finally back on track!!

To be honest we have had an odd few weeks in the land of Sunshine and Paint Pots, we had multiple visits from Murphy, (of Murphy's Law fame) with our bathroom reno, we had so many things both good and bad going on outside of the house reno, and then we had an awful few weeks of sickness and colds go through the house, with only our Sasha avoiding it all.  I felt like this... 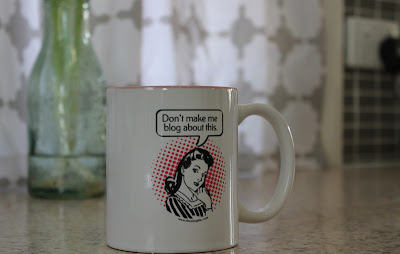 ...but didn't even have the strength to go through with my threats, I suffered the worst out of everyone so unfortunately was out of action for a full 2 weeks.  But we are all over it now and plan to kick this reno's butt and get this place finished!!

So without further moaning about all the bad stuff that's happened ado, here is the second part of our kitchen reno, if you need to refresh your memory, or haven't read the first part go here to re-read it.

In a brief re-cap (for those who can't be ar*ed to click above..lazy much?!)....we were adapting the current kitchen to more suit our needs and the needs of a modern kitchen, without changing the layout/floor plan of it.  To gut the whole thing would have been over budget and almost pointless.  Due to the lack of any extra available space, we would gain nothing by changing the layout, the cupboards were generally in good nick and the laminate work top (although not exactly what we would choose ourselves) was in great condition and, with a change of colours around the kitchen, would work in well with what we would be doing.  So, in terms of modernising the space it basically needed a dishwasher cavity, more storage, a change of colour in both walls and fascias, a new sink and faucet, shiny new handles, new paint and a new floor.  Easy peasy right?!

The first job (after prep and painting) was to get our cabinet maker in.  We had originally planned to do all this ourselves with the Bunnings Kaboodle range, a smart looking, shiny melamine.  The finish on the Kaboodle range is beautifully clean and modern, BUT we spoke with 3 different kitchen experts and they all said NO WAY, don't use it!  Apparently it is perfect in the cooler climates down south but up here in the tropics it doesn't work well at all.  The heat and humidity plays havoc with the coating and peels very quickly ruining the entire finish. So we steered clear of that and went with a great cabinet maker who had just left a big company here in Townsville and started up on his own.  He has no overheads and still uses his old workplace to cut all his pieces, so his costs are way lower than the big companies and in turn he delivers a perfect, experienced service for half the cost.  We had to wait 6 weeks for him to start, his new business is booming, but that was just fine we would happily wait for the savings we were making! 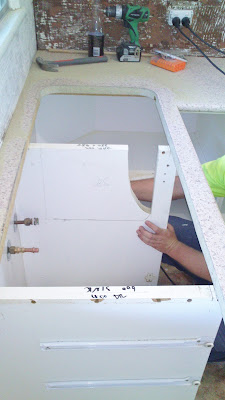 He began by altering the cabinets under the sink to accommodate our new double sink.
Remember in the last post Col mentioned a drama with the sink?  As we were keeping our existing laminate bench top, it meant we had to stick to the same or 'as close as' dimensions for our sink.  That in itself sounds like an easy task, after all a double sink is a double sink right??  Hmmm.. kind of.  It took us about 3 weeks to source the sink with the closest dimensions, I had checked it, Col had checked it, even Daryl our cabinet guy had checked it on one of his measuring visits.  It was gonna fit.  The only thing none of us actually did, was take it out of it's nice, neat packaging box.  Until now, the day it was due to be fitted.  As soon as he opened it and saw the edges he knew it wouldn't fit after all.  The edges on this nice, new, shiny sink were beautifully curved, not like the old thing that had much squarer corners.  So there would have been huge gaping holes around each corner.  Col as you can imagine, was ropable!  Mainly because he honestly didn't think we would find anything else to fit.  We had to work fast to find a replacement as we wanted the majority of this fit out done today.  Daryl felt sooooooo bad that he had overlooked it (being new to this, we would never have thought to see how curved the edges were but he perhaps should have known better) that he immediately phoned around every trade-mate that he knew in the Ville until he found something the right size.  There was only one possible choice, it's a commercial sink, so is much bigger than our original, but we had no option but to accept it.  Within 3 hours he had it here and it fitted! 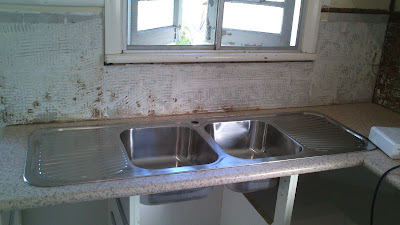 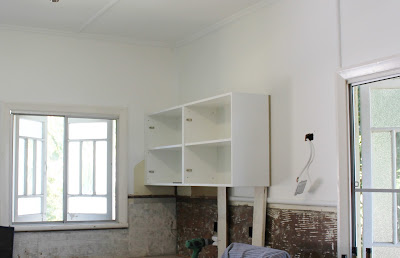 In the meantime the brand new cabinets were going up, to create double the storage..yippeeee
*Note the deliberate mistake, we ran out of time to paint behind the old microwave cavity.  So when the next owners come round to updating this kitchen, they will find random paint colours behind these cabinets...eveyone loves a bit of history.. right?! Building the new cabinets to fill the otherwise dead space between the pantry and the dining area. 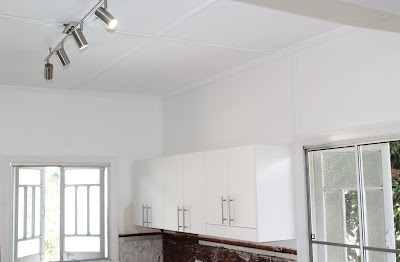 Fascias, handles and exhaust fan have gone up, it's finally starting to come together!
Due to us keeping the existing laminate work top, it meant that we would have a small section of laminate bench on the pantry side of the kitchen that wouldn't match.  Not ideal I know but if we were to keep to budget we had no choice at this stage.  Daryl insisted that we do not try to match it, but instead go for something totally different.  I went against his advice (which he was very good about, he just smiled through gritted teeth and said 'okay') as I thought all the other options looked equally as odd on their own, and also because this area is going to house our microwave and coffee machine, so therefore will not be 'that' noticeable.  So I went with a modern day version of what is already there and I actually really like it.  Ideally if we were staying here long term we would change the whole thing out to match, but for now it is just fine. 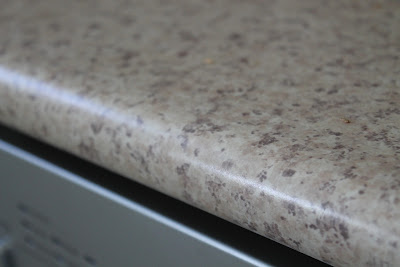 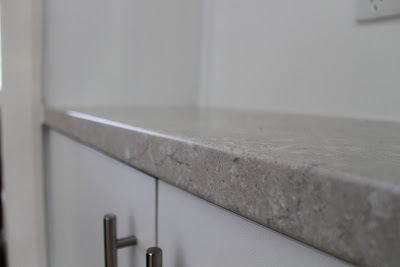 *Note if you are wondering why we didn't just re-laminate the existing bench top like you see on all these makeover shows, if we could have we would have.  It is possible with surfaces that have a flat edge like in the new piece above, but as ours has that curved edge it isn't possible, so unfortunately it was never an option.
As for the dishwasher saga...as you can see below, there was NO WAY a dishwasher would fit in the space next to the sink. 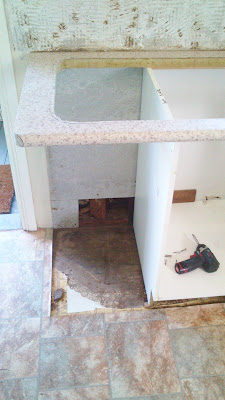 Even if we moved the internal cabinet over to the right to create a bigger gap, it would still not allow the space for a double sink bowl to sit, so it was never going to work. One day, weeks earlier when we had Nick Nack (our awesome chippie) over for a beer we were all stood staring at the kitchen looking for solutions. He was 'the thinker' who actually suggested moving the dishwasher cavity to a cupboard next to the cooker. Yes it is totally unconventional but in the grand scheme of things it really makes no difference.  The next day we got Greggy (our plumber) and Daryl over to take a look to make sure it would work and they both agreed it was the best only option.  So while Daryl was here finishing the refacing of our cupboards, Greggy was here plumbing in the dishwasher, the pipes are held up internally through the corner cupboard, you don't even notice they are there.  You can just see the brand new shiny Omega Slimline washer poking out from its new location below. 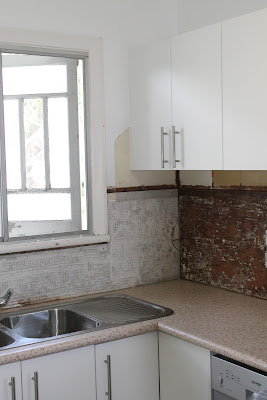 All in all the kitchen was taking shape and looking like a brand new room, it was amazing to see Col's vision and design all gel together so well.  He has an amazing eye for this stuff, I find it really hard to visualise most of the time, but every time he has been spot on with both design and use of space.

In the next and final part, I will cover the tiling, flooring (boy did we cause some controversy there) and all the final styling.  The finished pictures will blow you away, I am certain!!

Cheers and thanks for reading..
K xx
Posted by Kate and Col at 20:59