...getting the semi-kitchen of our dreams, starting with demolition!

When I say kitchen of our dreams, it's stretching the truth a little bit. What I actually mean is getting the best kitchen we can, without starting from scratch. And when I say demolition, it's more like a considered and selective removal, rather than a full blown gut. The kitchen had seen a partial renovation sometime in it's recent history, approximately 10ish years ago according to our cabinet maker, he could tell by the pattern of the laminate bench tops.  So that is also why we didn't need to gut the whole space.  So just to refresh everyone's memories, here is a quick snapshot of the kitchen as it was when we arrived back from America in February... 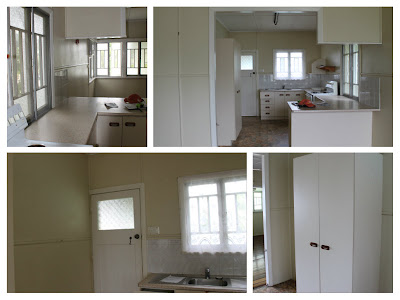 You've probably already read about what happened with the kitchen fluro light, but if you haven't you can catch up on our lucky escape here. And if you have a look at this subsequent shot, you can just see the 'emergency' batten light fitting our sparkie installed so that we would still have light in the kitchen, especially handy while I continued with the wall and ceiling painting. 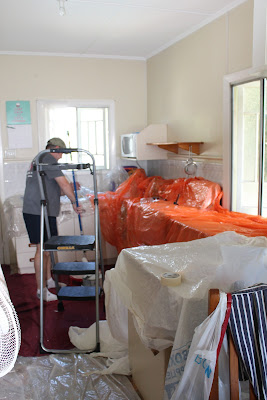 Soooo, time to tackle all those jobs and prep the kitchen one 'small' task at a time. First of all we needed to get some new power outlets (GPOs) installed - in order to move the new fridge to the right hand side of the pantry, raise the old fridge outlet to a higher position to allow a bench top to be installed, put a new outlet in and hard wire in the new stove / upright cooker, add two more in cupboard locations for the soon to be installed rangehood and slimline dishwasher. (That's right, a beautiful, little slimline dishwasher as this ol' kitchen didn't have one).
At the same time as doing this electrical work we replaced every.single.lightswitch.and.powerpoint in the house so that it was standard throughout, rather than the existing blend of 1950's, 1970's and 1980's switches. Oh, and we needed to do something about the world's largest light switch. You can see it in the dodgy close up below, the second picture shows where I had to patch the wall, as the old switch had left an enormous cavity beside the new modern light switch. 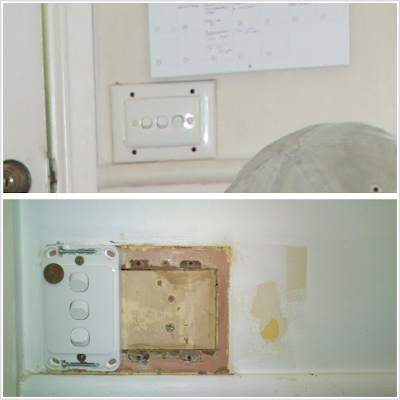 There's an interesting story behind the coin that is 'blu-tacked' to the front of the new light switch, but we'll cover that in detail when we do the blog post about the master bathroom renovation.

My next task was painting the existing walls and ceiling (before the new cabinets were installed), and getting our trusty sparkie to install our flash new lighting fixture in the kitchen, which you can see below :o) 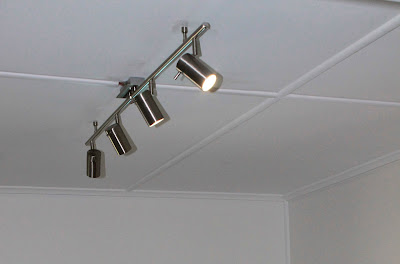 But that's the limit of the sneak-peaks on offer here!! I'll cover all the dirty jobs required to prep the kitchen for its long overdue remodel, and in Part II, Kate will cover off on the design, fit-out and finishes.

Having raised the powerpoint in the old fridge location (and relocated the fridge to the right of the pantry, I got busy painting the last two corner walls of the room. From there it was back over to the opposite corner to take down the existing microwave shelf and start the lovely task of removing the existing (once upon a time they were stylish) tiles from the kitchen splashback. Thankfully the majority came off easily, but as Murphy's Law would have it, the most stubborn ones were also the hardest ones to get to - those in the corner where the bench tops meet. 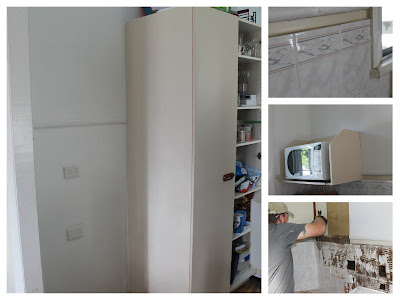 Having finished the splashback removal, the next event in the demolition derby was to remove the rest of the old lino flooring. While there are hardwood floors underneath that match the rest of the house, we wanted a newer fresher look that suited the kitchen, so we chose to stick with lino as the replacement flooring, as the sub floor sheeting was in good condition. Not only that, but without doing a complete gut of the kitchen, the sub flooring was put in over the original lino flooring so they only went up to the edge of the existing cabinets (which were going to get refaced). You can see what I mean in the photo below... 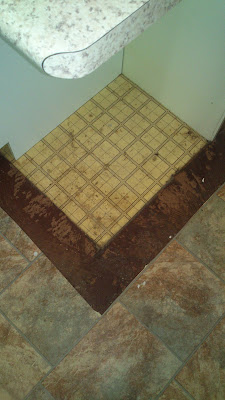 The check pattern lino is laid over the original hardwood floors, then the sub floor sheeting was laid directly over that, over which was laid the existing 'marble' type lino. One of the flooring supply shops insisted they would lay over the top of the existing flooring; I said no for a number of reasons. First of all, it would be yet another layer of flooring upon flooring, upon flooring. Secondly, there was a lot of dings and bumps in the existing lino, which would only show up again when new lino went down. Having ripped up a strip of the existing lino where a new cabinet was going to go, it immediately became obvious that the old glue had long lost its grip, and (thankfully) came up easily with the use of a Stanley knife and a dash of old fashioned muscle (yours truly).

And just to rehash old ground, if you read our post about 'Basil the Rat', then you would be pleased (??) to know we found a smaller / similar nest over near the new dishwasher void once we removed that existing cabinet. 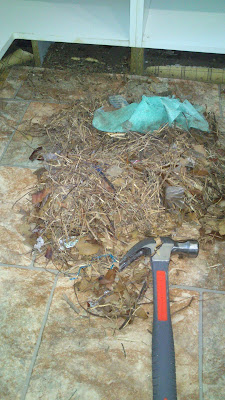 Perhaps it was Basil's original home as a young fellow, but as he grew he obviously needed an upgrade so chose 'under sink' living instead. When you see the hole behind the cupboard he got in through, you'll understand why he upgraded his abode... 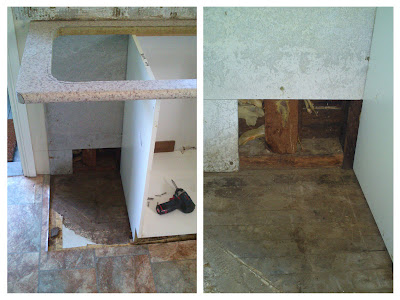 Yep, that's one hell of a hole. So while the cabinet maker had the cabinet out to reface it, I quickly cut a new piece of Villaboard cement sheeting to size and closed off that living space to any potential future tenants (in addition to finding the offending entry point under the house and closing that off as well). Obviously as you can see we took out the existing sink and capped the pipes ready to install the new sink (Kate will write about this saga in the next post). And with the flooring up and the tiles off it kind of left the kitchen looking a little bit like this... 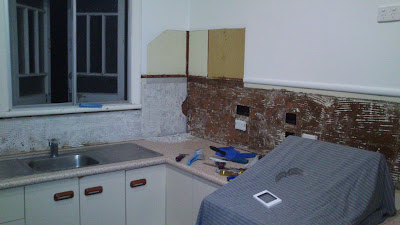 So stay tuned and we'll deliver the next instalment of Our Kitchen Rules soon.
Cheers, Col﻿
﻿