I am sure you don't need reminding about previous posts in this series but just in case, or on the off chance that we have some random newcomers to our little world, you can find Part I here and Part II here if you would like to catch up.

Once the cabinetry was all done and the dishwasher was in, the kitchen still needed work but was usable and it was great.  I now had more cupboard space than I needed (although it soon got filled up) and everything had its place which, as we all know, is so key in keeping things tidy.

*Talking of which I wanna share this tip...(**sorry if most of you have been doing this for years..but it only dawned on me during this re-fit)  I had bought a plate rack (top right) on sale for about $2 thinking my plates would stack neatly inside our crockery drawer...FAIL.  My plates didn't fit, so upon looking in my cupboards to see where else I could use it, I saw the mess that was my baking pan shelf.  So I flipped this little thing on it's side and stacked all those hard to store pans and trays...hey presto I have a much more organised baking cupboard...awesome huh?! 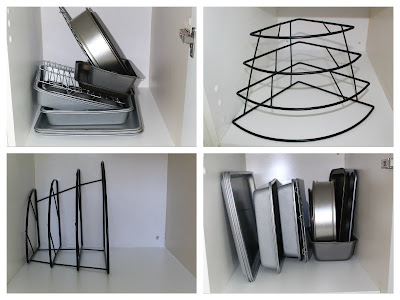 Anyway...the next job to do was the back splash.  Way back when we were doing our bathroom I had told our tiler Bin that I really wanted to do the kitchen tiling myself.  To which he responded "Good, I'll lend ya' all ma' gear and teach ya' how it's done, and Col can bring me a few tinnies (beers for our non Aussie readers)"  And that's exactly what he did, he is so cool!  As the original tiles had almost fallen off, it was clear that they were either not put on with the best of adhesives, or the walls are just not that keen on having anything stuck to them, Bin said we could either re-sheet over the existing walls so that the tiles had something to grip to, or have our wet sealer come and coat the walls so that it gives it a nice even area for the tiles to stick to.  We chose the latter, it is quicker and cheaper but gives the same results.  When it came to it, our sealer Haysie was AWOL (gone fishin' apparently) so Bin did it himself, (hence why it isn't as neat as our bathroom wet sealing - sorry Bin if you're reading!) 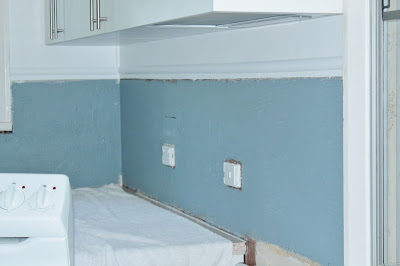 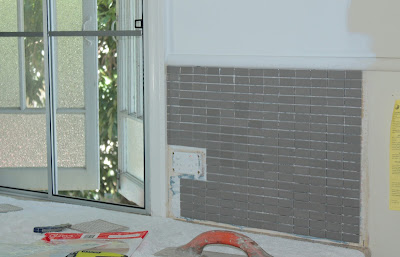 Tiling going up by moi!!


Bin went off on holiday leaving me all his stuff so that I could grout the tiles and finish off, it was great, I loved tiling.  Although I have to say as these were tiny tiles on a mesh backing it was a bit easier than having to cut loads of larger tiles to size. I don't know how I'd go on a tiled floor but would love to try.  Maybe the next house!
PS - we don't seem to have many pictures of the tiling happening probably because I am chief photographer so this will have to do till the final pictures at the end! (*edit by Col - or it could be that Kate doesn't like any photos being taken of her!)
With the tiling completed we only had two more jobs, the floor and the curtains.  We wanted to have some kind of covering for the windows but didn't want to completely block out the views and light.  We have a lychee tree to the side of the house (picture above) which is gorgeous to look at and the back window (over the sink) looks out to the pool so I didn't want to go for something that was full coverage, and I wanted something that would let the light in too.  So I decided to make my own cafe style curtains, that cover the lower portion of the window only, that way we can have them shut and still have light coming in from the upper part.  I found the perfect fabric at Spotlight to tie in all the colours and got sewing!  I attached them with a simple stretch wire to alleviate any bulky rods or rails going across the window frame. 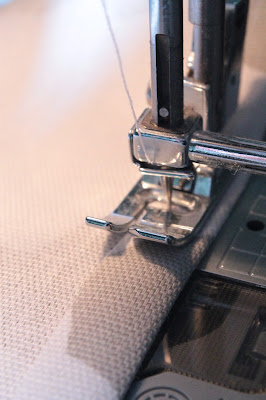 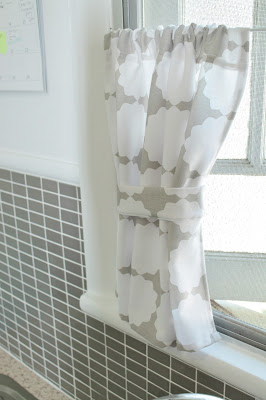 So what about this flooring situation - well, this is the part where you will either love or hate our new kitchen!  It is 70/30 (in favour of our choice) so far with visitors opinions.  If you remember we had this lovely (?!) floor when we moved in... 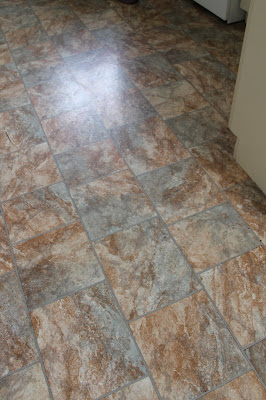 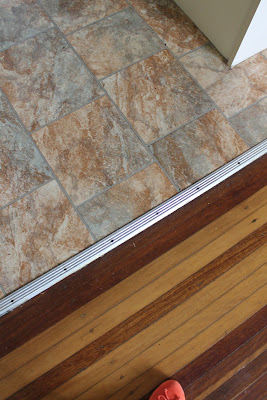 And it backs straight onto our dining and lounge area which, like the rest of the house, has polished floorboards

So our dilemma here was... what to do, what type, what colour, what finish??!  The folks at the carpet and tile store said to rip it up and take it back to polished floors keeping it fluid throughout the house.  We absolutely did not want to do that for a few reasons, the practicality of having floorboards in a kitchen wasn't sitting well with us, the teeny tiny groves between the boards could harbour all manner of germs and stains, not to mention water issues and secondly there were three different coverings over this floor already so once you got down to the boards (after pulling up layer after layer) you might find them in awful condition or they may have a stain or be damaged right in the middle of the room and then you'd be back to square one.  The floor sheeting under this lino (from a kitchen upgrade 10 or so years ago) was in great condition with no marks or lumps, so it was perfect to lay new flooring straight over, so we decided to keep to a practical washable easy lay lino.  Then came the choice of colours and style..OMG sooooooo many.  Here are a few we looked at.. 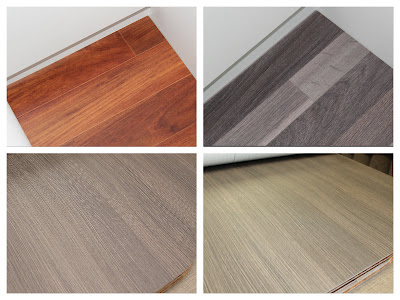 We liked the top left as it was almost the same as our floors but thought it may look a bit odd.. like we were trying to match the existing floorboards and didn't quite make it, so decided against it.  The two lower ones are a lovely linen look floor that looks stunning when it is down and, had the colours been slightly more grey than brown-ish we would have chosen one of those.  Soooooo after much deliberation and an on-going poll with Sasha, Poppy and 4 different tradies....we went for the grey floorboard look (top right)!  I know, half of you are probably going what the..!?  But honestly the colour was perfect with the white of our cupboards, with the existing laminate benches and with the new tiles that had just gone up.  So we went against the advice of the flooring shop (are you seeing a pattern here?) and went for it! 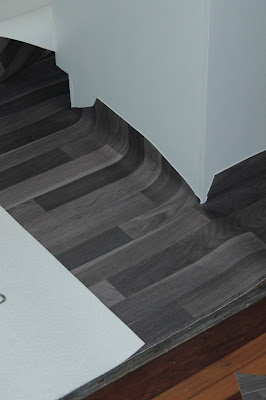 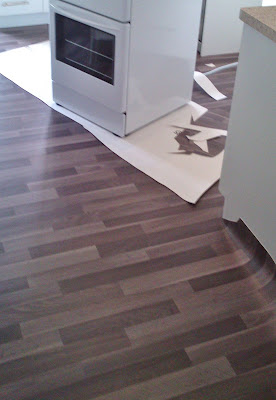 As we have since learnt through research and having people come through the home and share ideas, many have said it is far better to have such a contrast as it clearly separates the kitchen from the rest of the house.  Also by choosing the best colour for the space it finishes off the area perfectly and makes a feature of it as well. 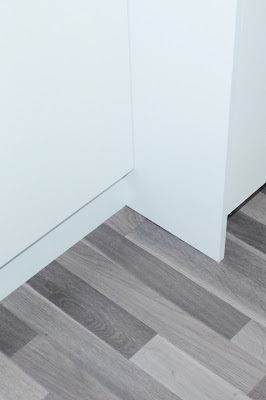 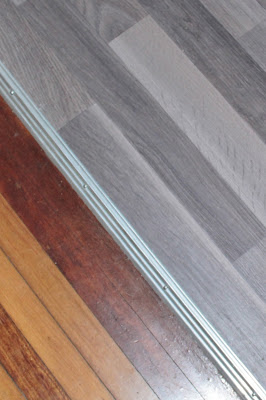 Well...what do you think?  Are you for or against?

So, at long last the biggest project of our reno so far is complete.  As I said in my last post, I hope the 'after' pictures will blow you away, of course I am not suggesting that you are about to witness a kitchen makeover of 'Grand Design' style proportions, we are not talking about a million dollar bling-bling chef's kitchen here.  We are just so pleased how far this humble little kitchen has come with a great deal of planning, work and vision...enjoy! 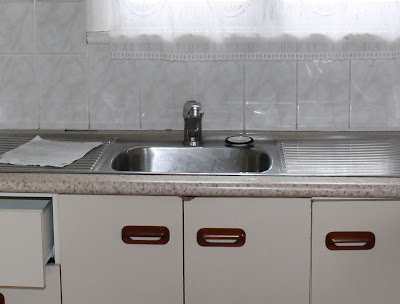 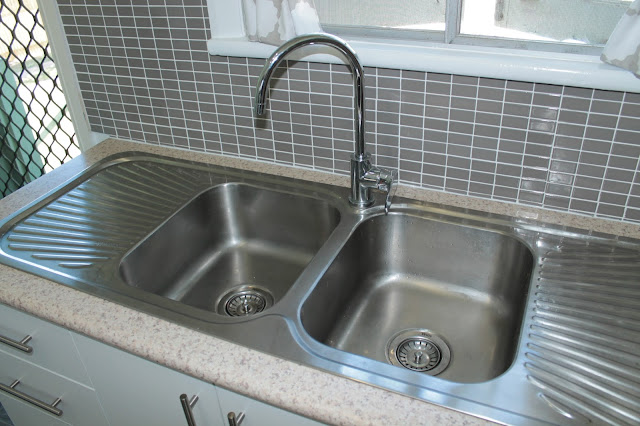 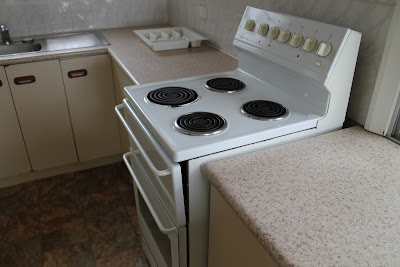 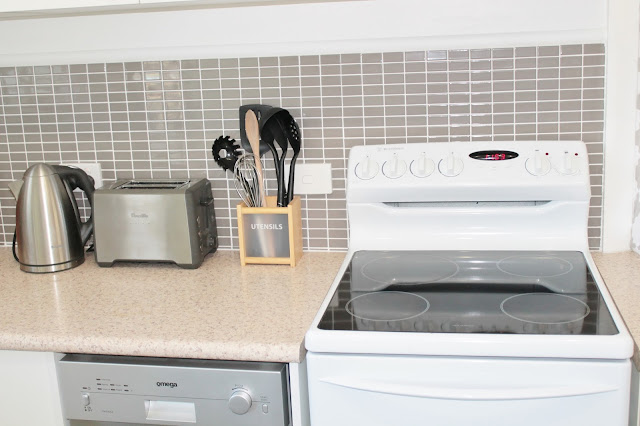 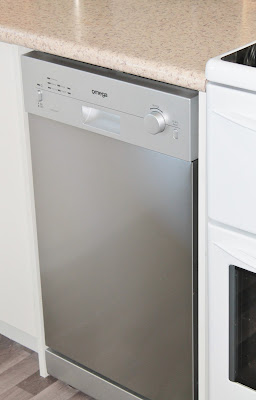 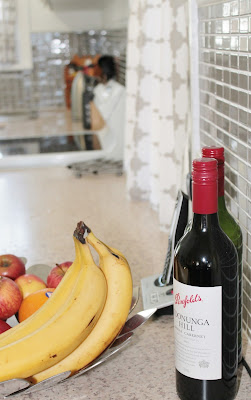 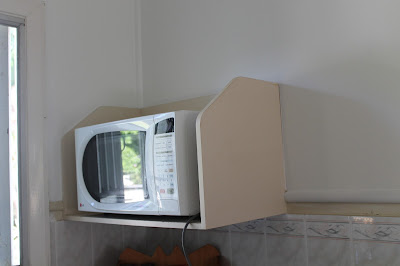 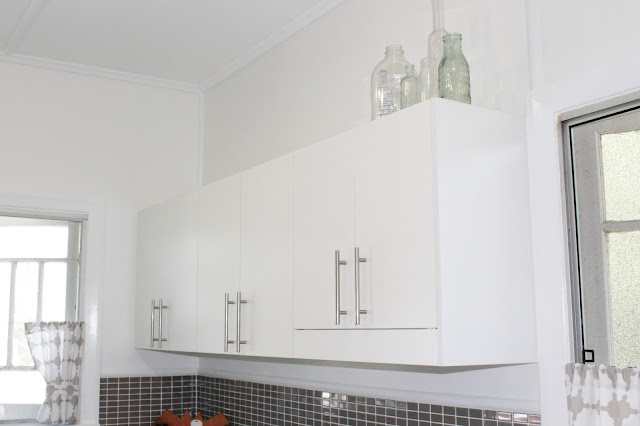 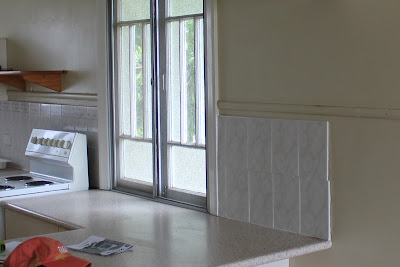 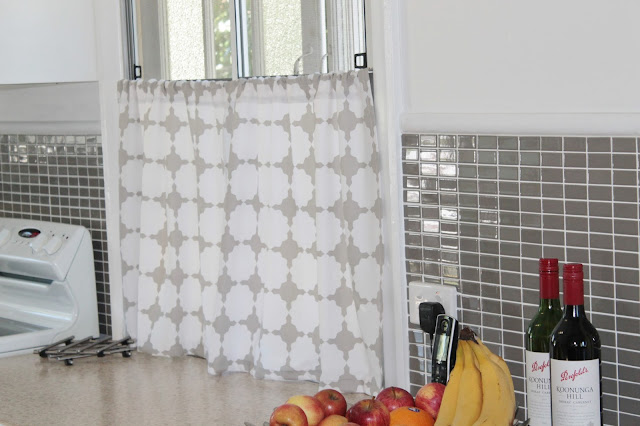 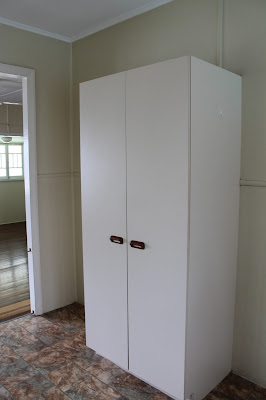 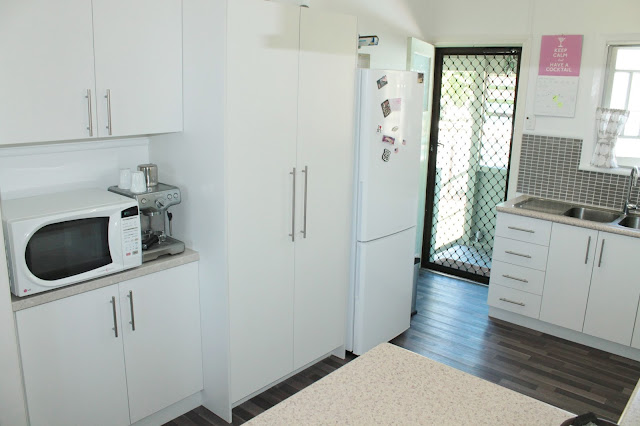 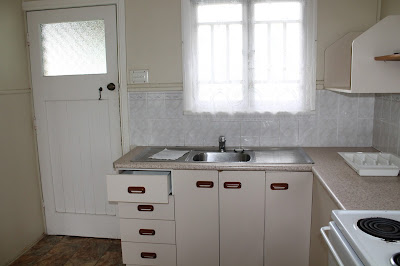 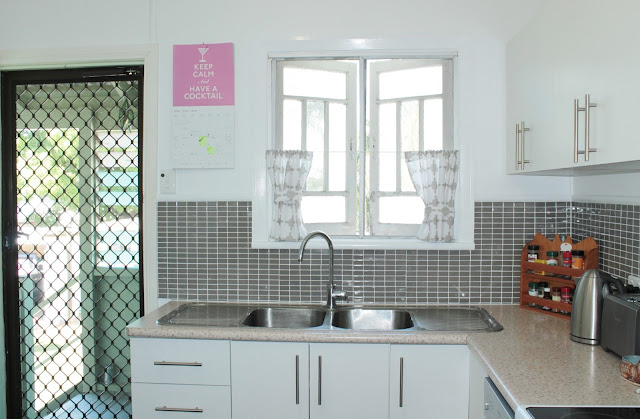 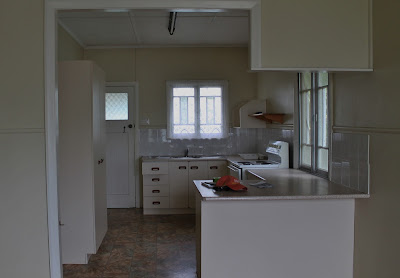 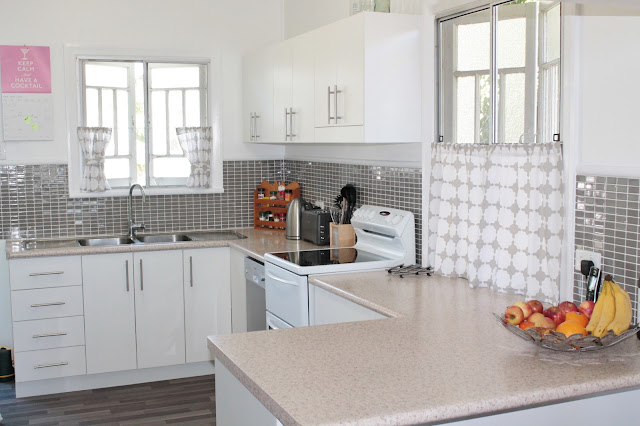