Storage, storage, storage - one of the most important functional aspects for a home that most people will value after location, location, location. But unfortunately old Queenslander homes, bless their cotton socks (or white concrete stumps in this case), aren't really known for oodles and oodles of storage space. Traditionally they are empty rooms with storage provided by wardrobes, dressers, tall boys and bedside cabinets; but certainly nothing like the integrated masses of built in storage you find in modern homes.

Luckily for us, two of the three bedrooms in the land of Sunshine & Paint Pots had built in storage, those being the master bedroom and the third bedroom. While the third bedroom's built-in robes would scrub up nicely for the girls with a good clean, a coat or two of paint and some shiny new handles, sadly the same could not be said for the master bedroom. You can see what it looked like below: 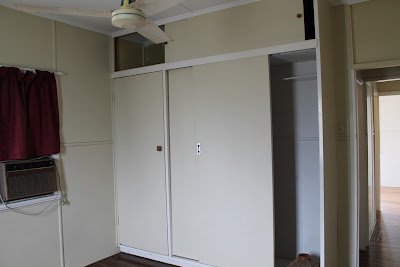 The master bedroom's built in robes were the product of a bit of old fashioned home carpentry many moons ago and as a result they were not structurally very sound, were a bit smelly, and the lower wall panel (which backs onto the master bathroom) looked like it had some evidence of earlier water damage. So, given that we were conducting a renovation of the master bathroom, it made sense to get in there, gut the existing cupboards and replace it with a custom made floor to ceiling built in robe, built by our chippie Nick-Nack...with a little help from yours truly!
As we often call this house the learning house (it's not our forever home, it's a step up to get that forever home), one of the most important lessons we have learnt is that you don't save money by trying to do every aspect of a renovation or project yourself, but rather by doing some of the less desirable jobs like prepping, painting and demolition work. So I decided what better way to start the Easter long weekend than to gut the existing built in robes on Good Friday (and it did feel good ripping this lot out ;o)
﻿
﻿ 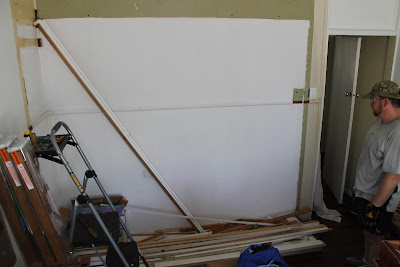 We painted the inside of the robes when we first moved in, purely as a temporary measure because we both refused to put anything inside it until it was done!  You can see in the picture above the four different colours the room has been over the years. The yellowy-creamy on the left hand side, the green colour on the back wall, the light cream between the door frame and the side of where the cupboards used to be and then the band at the top right above the door (and of course the back wall) which is the new fresh bright white paint we have been using throughout the house so far. 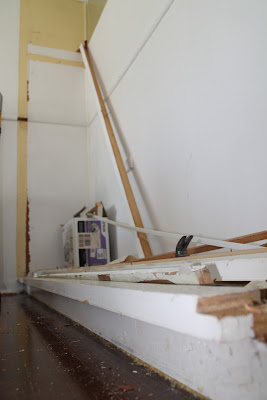 If you look closely at the bottom of the cupboard, between the kick board and the hardwood flooring, you can see slivers of the 1970's fluro orange shag pile carpet that the built ins were sat directly on top of. Nice...BUT even when it's not to your taste it is still so lovely to see the history of a place unfold before your eyes.
Once the water damaged wall of the built in was removed, we suddenly had an impromptu large scale window to the bathroom renovations, (given the sheeting on the other side was removed as well, more on that in our master bath post coming soon). Given that I was  getting extremely irritated by Kate moaning about the possibility of spiders casually scurrying up through open drain holes and into our room unable to sleep in this new expansive space,  I put a drop sheet up to provide the illusion of a wall... happy days !! 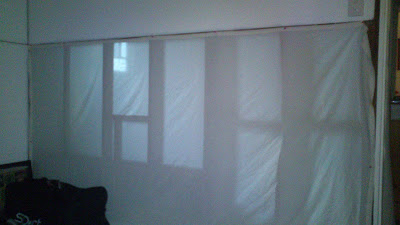 It was now time to get the experts in, namely our chippie Nick-Nack to whip us up a custom made floor to ceiling built in robe, that would fit in with the existing carpentry and joinery and not look like some poorly executed add-on. Another reason for using a professional for some jobs, is that they are tooled up to deal with many of the little challenges that houses throw at you during renovations, and they can solve them quicker than the hours/days/weeks it would take you to fix... One of the challenges a post war Queenslander regularly throws up is that the house was hand built using silky oak in the frames and trusses. Hand built means hand sawn and hand nailed timber, and not necessarily many completely straight lines or right angles. The years of experience our chippie has in working with these old houses has been an immense help, not to mention the quality of work he delivers.
The first step in the process was to resheet the wall frame with Villaboard cement sheeting, this was used both sides of the frame as it is suitable for use in a wet area. 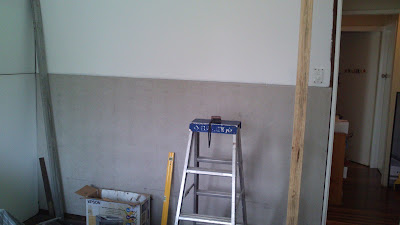 New Villaboard sheeting and first timber stud up in the frame 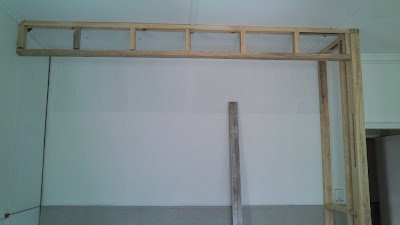 The next step was to build the frame which would house the walls of the built in robes and support the upper track of the new sliding doors. 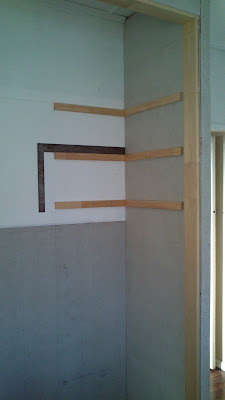 Next we sheeted the exterior and interior of the frame with Villaboard, then fitted the bearers to hold the internal shelves. 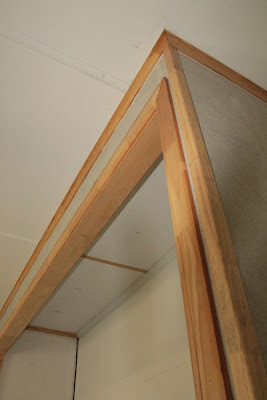 It was now time for all the trim to be fitted to the facing of the built ins, so that it all tied in with existing cornices / crown moulding, making the addition fit in properly to the rest of the room, like it has been there since day one. 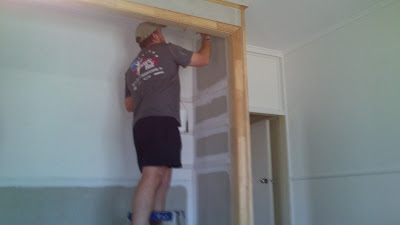 At this point our chippie did us a huge favour and knocked off for the day, which allowed us to get two coats of paint on the inside of the built in robes, before he commenced the interior fit out the following day (saving us hours and hours of taping and cutting in had we have done it the other way around). Excuse the blurry photo, it was taken on my phone in a hurry ;o)﻿
From here things progressed at a frantic pace, with Nick-Nack doing all the detailed work to get the melamine timber fit out installed. Again, all cut to size on site and installed with care. 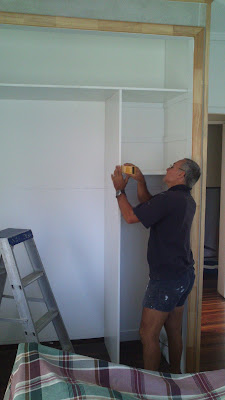 While Nick-Nack finished off the internal fit out upstairs, I got to work downstairs putting together the basket frames for the wire drawers we purchased from Bunnings. If only it were as quick as the diagram and finished product suggests... 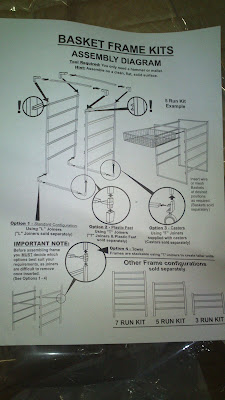 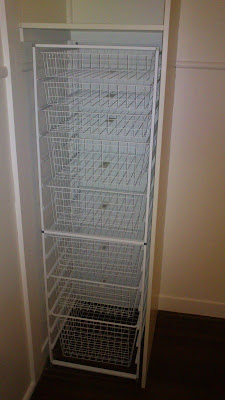 Once it was all put together it looked totally awesome and created far more space and functional storage than the original cupboard gave us. 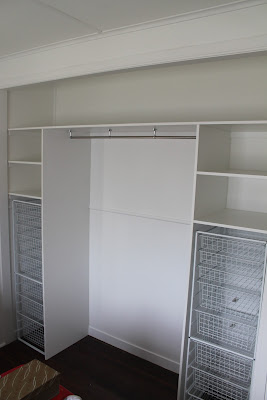 The last step was obviously to get some sliding doors added. These were being custom made by our glazier/fly screen/shower glass expert Rusty, essentially to hide all the 'stuff' that was about to be piled neatly folded and placed inside. 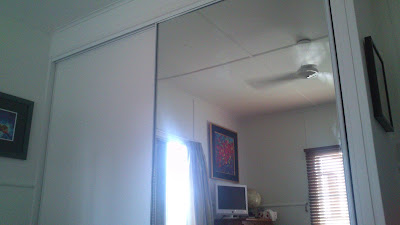 This is quite possibly the worst photo ever, but for now it gives you an idea.
(A better picture will be posted when we do our master bedroom reveal)
All in all, even though it is just a small part of a house, this was a huge change for our home as it has provided much needed storage in our bedroom, thus making the space more user friendly and ultimately neater and tidier.  We are lucky that the room is on the bigger side (in Queenslander terms) and having the built in robe in place is a huge advantage.  It is already full (meaning we don't have to sort through boxes and suitcases every.single.day for clothes), and we are both extremely happy with it.